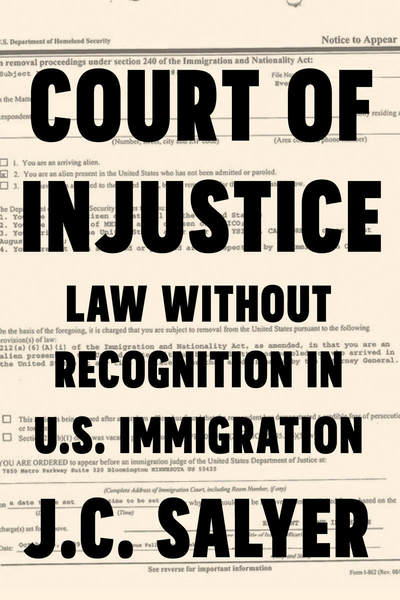 By introducing the anti-immigrant policies of the Trump administration, this chapter explores the broader nature and history of anti-immigrant policies and the deprivation of the rights and interests of immigrants. It introduces the main arguments of the book, which are that immigration law fears migrants in a manner that is so overbroad that it punishes, detains, and deports immigrants who bear little resemblance to the stated fears used to justify the laws and that these practices go unchecked by the courts, which defer to the political branches of government under the plenary power doctrine. Finally, the introduction argues that we can learn a lot about the potential for resistance and reform by understanding how lawyers advocating for their clients in immigration courts are sometimes able to achieve just results for their clients even within this unfair system.

This chapter uses the ethnographic example of a young man named Omar to illustrate how history, political and economic changes, and race are intertwined in the production of sweeping immigration laws aimed at the perceived dangers of criminal aliens and explores how the 1996 amendments to immigration laws were a manifestation of a neoliberal ideology that constructed "aliens and citizens as different kinds of persons" (Greenhouse 2013, 104). The chapter shows how a key aspect of these changes was removing discretion to make individualized judgments from immigration judges and how the restoration of this discretion is necessary to reach just results.

2 A Social History of the Development of U.S. Immigration Law
chapter abstract

This chapter addresses how the contemporary position of migrants relates to the historical development of U.S. immigration law. The chapter explores how more than a century of immigration legislation and judicial interpretation created both substantive and procedural limits on the protection of migrants' rights. In particular, the chapter shows that the trend has been for perceived threats to be projected in the form of an abstract alien, who embodies those dangers, but for the laws that are passed to be so broad that they affect actual individuals who do not present those threats.

3 The Role of Lawyers and Judges in U.S. Immigration Law
chapter abstract

This chapter draws on participant observation and interviews to examine current immigration law and focuses, in part, on areas in which immigration judges still retain some discretion: asylum cases and cancellation-of-removal cases. The chapter explores how, even within the relatively rigid system of laws that make up current immigration law, immigration lawyers are able to retain and exploit some flexibility to achieve favorable outcomes for the individuals they assist.

5 The New York Immigrant Family Unity Project: A Revolution Such as Lawyers Would Mount
chapter abstract

This chapter provides a detailed account of NYIFUP, which is the first government-funded assigned counsel system for indigent detained migrants facing deportation. The chapter shows how NYIFUP is able to not merely improve access to counsel for individual clients but also use its institutional structure to make broader challenges to existing laws and practices and to systematically document abuse, mistreatment, and injustice suffered by migrants in detention and in removal.

This chapter concludes the book by arguing that one of the main failings of the current immigration system is its refusal to recognize individual equities, such as family relationships, hardships, and social participation and contributions. By examining the Supreme Court's rationale in Trump v. Hawaii, this chapter analyzes how the socio-legal position of migrants is conceptualized. The chapter argues that although immigration law is not itself the sole or main cause of (or solution to) issues of inequality and injustice that relate to migration, its current formalistic and inflexible nature should not be allowed to reduce complex individual, historic, political, and economic events and relationships to narrow legal categories that limit the ability to provide justice to people in precarious positions not of their own making. The chapter ends by recommending areas for reform.