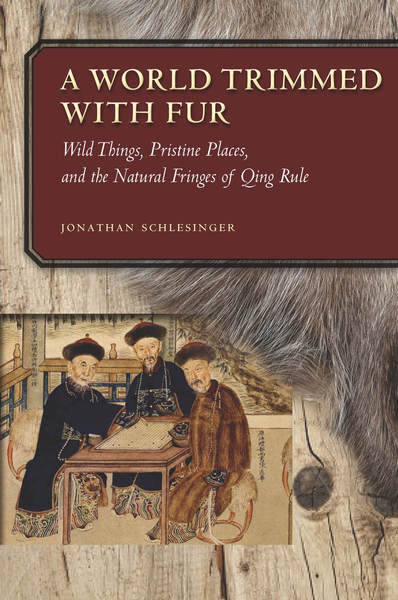 In 1886, the explorer H. Evan James claimed to discover pristine nature in Manchuria; the only order in Manchuria, he enthused, was Nature itself. Strikingly, a century and half earlier, China's Qianlong emperor (r. 1735-1795) celebrated the region in similar language. Still further, his court went to extraordinary lengths to defend both the Manchu homeland and its unspoiled nature. What, then, constituted pristine nature in the Qing?

1 The View from Beijing
chapter abstract

A momentous change occurred in eighteenth-century China: fur, together with other products that seemed both exotic and natural, became popular. What meaning did natural objects have in everyday life? Using archival and literary evidence, pawnshop records, travel accounts, and sumptuary laws, the chapter shows how consumer patterns and marketplace understandings of nature shifted through the course of the eighteenth century. From a world where no Chinese word existed for products such as "marten" and "Manchurian pearl," consumers ushered in a new one where connoisseurship of furs marked elite status, and words existed for every part of each animal's anatomy. Though faux furs, farmed ginseng, and imitation wild Mongolian mushrooms flooded the street, knowing consumers sought the real thing: undyed, uncultivated products from the far north. While at first a court fashion, by the mid-eighteenth century nature was for sale throughout the streets of Beijing.

Something strange happened in Manchuria under Qing rule: its freshwater mussels disappeared. Stranger still, the Qing empire did everything in its power to preserve them: draft soldiers; fortify passes; patrol rivers; send boats and horses and silver and men. It streamlined the bureaucracy and revamped the local administration. "Nurture the mussels and let them grow," the emperor ordered; let Manchuria have mussels. Chapter explores what happened: the collapse of the pearl fishery the attempts, in the language of the Qing court, to "nurture the mussels." The court put its full weight behind efforts to create a long-term sustainability: it reorganized the administrative structure, empowered territorial governors, and created militarized off-limits areas. Poachers were arrested; the mussels allowed to rest. Through a detailed description of the tribute system, the ecological crisis, and the court's response, the chapter documents how a reinvented Manchuria came to be.

As the pearl crisis raged, a rush for wild steppe mushroom moved to the center of the imperial agenda in Mongolia. Unheralded and forgotten, steppe mushrooms were big business in the Qing; by the 1820s, thousands of undocumented workers crossed the internal boundary from China to Mongolia each year in search of mushrooms. The chapter opens with the case of a passport forger whose arrest triggered a court edict against mushroom picking in 1829; we have little else of the affair in Chinese. The archives in Ulaanbaatar, however, contain hundreds of documents that detail the long, violent conflict that culminated in his arrest. By analyzing the confessions of mushroom pickers and the depositions of local officials, the chapter reconstructs the history of the mushroom rush and explores how a recreating a "pure" and pristine environment in Mongolia became the top concern of the court.

4 The Nature in the Land of Fur
chapter abstract

In the borderland with Russia, a similar crisis emerged with furs: From the Altai Mountains to the Pacific Ocean, sables, then foxes, then squirrels vanished from the forest. In response, the Qing state again mobilized itself for another "purification" campaign: it repatriated trespassers, reinforced the boundary line around hunting zones, and attempted to ensure the long-term sustainability of fur-bearing animals. The chapter documents the interconnections between local, regional, and global fur trades in the late eighteenth and early nineteenth centuries and provides a case study of the environmental crisis in Tannu Uriankhai lands, in modern Tannu Tuva. There too, the archives show, the Qing court attempted to "purify" local nature and remake it as pristine.

The resulting analysis of these dynamics provides a framework for rethinking the global invention of nature. We cannot understand the invention of "pure" nature, both within and beyond the China, without a more nuanced and multifocal understanding of empires or the archives they produced. Putting peripheral places like Mongolia at the center of our histories, and learning to look both ways across frontiers, allows us to gain new vantages on how to transcend entrenched distinctions between foreign and frontier, coast and continent, East and West. Ultimately, modern "nature" and Qing "purity" belong to a broader, global matrix of historical inventions. Nature as we know today has deep, imperial roots.