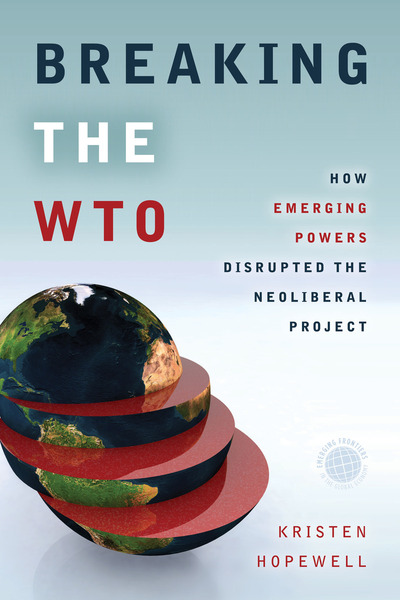 In the fall of 1999, fifty thousand protestors took to the streets of Seattle in opposition to a meeting of the World Trade Organization (WTO) and its effort to launch a new round of multilateral trade negotiations. The WTO had come into force only four years before—as a successor to the General Agreement on Tariffs and Trade (GATT) that had governed international trade since the end of World War II—but it had already generated an intense reaction from civil society groups. The creation of the WTO involved a significant expansion in supranational authority and the scope of trade rules. The WTO was at the heart of the neoliberal revolution sweeping the globe, and its officials saw themselves as writing a new constitution for the global economy. Civil society actors were gravely concerned about the implications of WTO trade rules for a wide range of issues including human rights, poverty, inequality, development, the environment, education, labor, and health. Moreover, this immensely powerful institution was seen as exclusionary and undemocratic in its decision-making and void of transparency or accountability. Organized by a broad network of social movements, nongovernmental organizations (NGOs) and trade unions, the Seattle protests united a diverse collection of actors seeking, as many of their banners read, to “Stop the WTO.” Environmentalists clad in turtle costumes marched alongside Teamsters, black-clad anarchists alongside the Raging Grannies. The protests closed the downtown core of the city for four days and disrupted the meetings of negotiators. The “Battle of Seattle,” as it came to be known, was a coming out party of sorts for the antiglobalization movement (also known as the global justice movement) and set off a wave of other mass protests at meetings of multilateral economic organizations—including the International Monetary Fund (IMF), the World Bank, the World Economic Forum, and the G20—at different sites around the world.

In the lead-up to the Seattle Ministerial, I was working in the Canadian embassy in Washington, DC, contributing to the formulation and development of Canada’s position in the upcoming negotiations. My job was essentially intelligence gathering—to act as a fly on the wall in Washington, collecting data on and analyzing the development of the US negotiating position and reporting back to Ottawa, so that Canada’s negotiating team could prepare its own position accordingly. In this, I was one of hundreds, or possibly even thousands, of people around the world preparing their governments for the new “Millennium Round” of negotiations to be launched at Seattle. This was to be a monumental undertaking, as the first trade round since the creation of the WTO in 1995.

Events in Seattle, however, turned out to be far more interesting than anyone anticipated. Entirely unprecedented and largely unexpected, the Seattle protests came as a shock to the trade community surrounding the WTO. Until then, the GATT/WTO had been virtually unknown to general public, a sleepy and arcane world of policy-making and diplomatic negotiations left to trade lawyers, economists, and bureaucrats. The Battle in Seattle had an explosive effect in thrusting the WTO into the media spotlight and rocking the very foundations of the institution. The Seattle protests also generated significant academic interest in global civil society and its potential to act as a transformative force in global economic governance. In 1999 and the early 2000s, this was one of most dynamic and exciting aspects of global politics—the emergence of a vibrant and colorful antiglobalization movement contesting the construction of neoliberal globalization through institutions like the WTO.

Almost a decade later, I arrived in Geneva in the late-2000s with plans to study the interaction between global civil society and the WTO during the Doha Round, which had been launched two years after the failed Seattle meetings. Several things, however, quickly became apparent. First, as I have written about elsewhere (Hopewell 2009; Hopewell 2015b), many civil society actors had become far less critical of the WTO and its neoliberal agenda. In contrast to the oppositional, anti-WTO stance that characterized the civil society protests at Seattle, over time many prominent civil society actors had adopted advocacy positions—such as on agricultural and fisheries subsidies—that fit within, rather than challenged, the dominant neoliberal trade paradigm. As a result, civil society contestation surrounding the WTO had diminished substantially. In fact, when the WTO held a key Ministerial Meeting in 2008, it went virtually without protest from global civil society.

Second, the most interesting and important conflict was no longer taking place between the WTO and civil society, but among states within the WTO, with the battle lines drawn in ways that were totally unanticipated a decade before. Observing and analyzing the development of the American negotiating position in Washington in advance of the Seattle Ministerial, it was clear that the US was preoccupied with a limited number of actors—chiefly, the EU, Japan, and, to a lesser degree, Canada. Other states barely registered on the radar screen: China was not even a member of the WTO yet, while Brazil and India were seen as struggling developing countries preoccupied with getting their domestic economies in order after decades of economic crisis and upheaval. There was certainly no concept of “the BRICs”—the Goldman Sachs report that would coin the term and give birth to the concept had yet to be written—and, if anything, in the wake of the 1997 Asian financial crisis, developing economies appeared vulnerable and insecure. In sharp contrast, in the late 1990s, the US economy was booming and, with the fall of the Soviet Union earlier in the decade, its global power had reached new heights. Just ten years later, however, as this book will show, the world looked radically different. When I began my field research in the late 2000s, the environment at the WTO was virtually unrecognizable from what it had been a decade before: the US and the other Western powers had lost their hold on the institution; Brazil, India, and China had emerged as central players; and a new fault line had become deeply entrenched between the developed and developing worlds.

Third, at the time of Seattle, neoliberal globalization was widely seen as akin to a steamroller, progressing inevitably through powerful institutions like the WTO. Yet, if we flash forward to the present, the Doha Round is now effectively dead and the WTO is consequently in crisis. The future of the institution is in doubt as debates swirl about whether it has become irrelevant. How do we explain such a remarkable change in such a short period of time?

That question lies at the heart of this book. As I show, what has disrupted the Doha Round and thus effectively “stopped” the forward march of the WTO is not contestation from global civil society but shifting power among states. The neoliberal project has in fact broken down at WTO. Contrary to expectations, however, this is not because of a counterhegemonic movement in opposition to neoliberalism. Rather, it has been caused by changes in the distribution of power among states and the rise of new powers—Brazil, India, and China—which are not contesting but seeking to work within the paradigm of global neoliberalism. By embracing the rules and principles of the multilateral trading system, rising powers brought its contradictions to the fore and precipitated a crisis at the WTO. The case of the WTO suggests that, surprisingly, one of the most serious threats to neoliberal globalization—as it has been pursued to date within the multilateral institutions—has come not from a direct ideological or political challenge, but the emergence of new powers from the developing world that have broadly accepted the neoliberal orthodoxy.

Preparation of this book has benefited from the generous assistance of a large number of individuals and institutions around the world. I would first like to thank the many WTO negotiators, trade policy-makers, and other actors who agreed to be interviewed for the study. Their firsthand knowledge of global trade politics is represented in the many quotations and references throughout the book, and their insightful comments were vital for analyzing specific events and informing my understanding of contemporary struggles over international trade regulation. The research for this book received support from several institutions, including a Fulbright Fellowship, the US National Science Foundation, the Chinese Academy of Social Sciences, and the Social Sciences and Humanities Research Council of Canada. I would also like to thank Tianbiao Zhu at Peking University, Joost Pauwelyn at the Graduate Institute of International and Development Studies, and Sigrid Quack then at the Max Planck Institute for the Study of Societies for generously hosting me at various stages during the research and writing of the book.

This endeavor began at the University of Michigan, where I was fortunate to work with and be challenged by a wonderful group of faculty members. I owe a tremendous debt of gratitude to Jeffery Paige, who spent hours discussing many of the themes and arguments that ultimately came to form this book, with an incredible knack for asking precisely the right questions to spur new and deeper analysis. Greta Krippner was extraordinarily generous of her time and intellectual energy, and her detailed and incisive feedback profoundly shaped the development of this book. Margaret Somers, Susan Waltz, and Mark Mizruchi offered highly valuable input at key points in the project and were all deeply involved in pushing my thinking forward.

I am grateful to the University of British Columbia, where I spent two and a half years as an assistant professor, for the resources, time, and encouragement to further develop the project. I completed work on this book in the School of Social and Political Sciences at the University of Edinburgh, where I have been fortunate to find a highly engaging intellectual environment and a group of wonderful colleagues. I would particularly like to thank Christina Boswell, Iain Hardie, Eve Hepburn, Julie Kaarbo, John Peterson, and Charlotte Rommerskirchen for their valuable advice and feedback. I owe special thanks to Margo Fleming, James Holt, and John Feneron at Stanford University Press, and J. P. Singh, editor of the Emerging Frontiers in the Global Economy series, for their enthusiastic support of the project and their incredible responsiveness and efficiency. I would also like to thank two reviewers for their very helpful comments and suggestions.

Finally, thank you to my family for their unfailing support and encouragement.