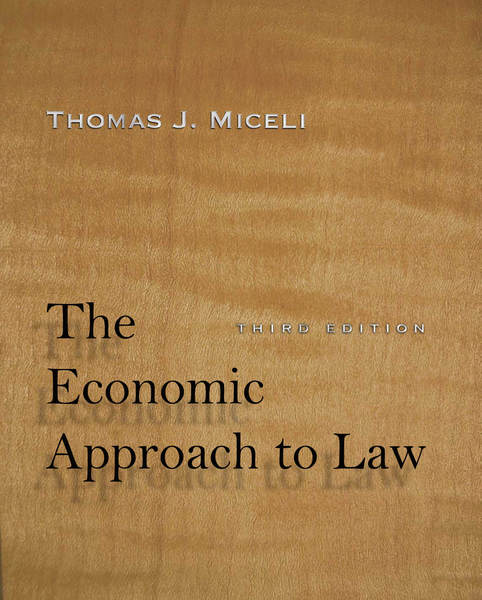 The field of law and economics, though still relatively new, is a rapidly growing area of specialization for both legal scholars and economists. Courses in law and economics are now offered in most law schools and economics departments, although a course directed at law students would be taught quite differently from one directed at undergraduate economics majors. This book is primarily aimed at the latter audience. Therefore, it presumes a basic familiarity with principles of microeconomics. The book does not, however, presume any knowledge of the law, nor is its objective to teach students about the law so they can decide whether to go to law school (though this may be a by-product). Rather, the objective is to show students how they can apply the tools of economic analysis to understand the basic structure and function of the law. This objective is reflected in my decision to title the book The Economic Approach to Law, rather than the customary Law and Economics, which might suggest more of a legal orientation.

Since the book is not, first and foremost, about the law, it does not attempt an exhaustive coverage of legal topics. Instead, it tries to tell a coherent “story” about the law. To this end, it focuses on the core areas of torts (accident law), contracts, property, and crime, along with a discussion of legal procedure and antitrust law. I have chosen these areas because (1) they best convey the ability of economic theory to provide a unifying framework for understanding law, and (2) they have received the most attention from economists and therefore reflect the highest level of development of the field. Two areas of law not covered in this book (with some exceptions) are laws written by legislatures (statutory law) and constitutional law. Economists have devoted considerable attention to the analysis of legislative law (principally under the heading of public choice theory), and an economic analysis of constitutional law has emerged in recent years. Although both of these areas fall broadly under the umbrella of law and economics, they raise a different set of conceptual issues that are best treated in separate courses.

The primary subject of this book is instead the common law, by which we mean that body of law arising from judicial decisions and the resulting legal precedents. Much of the economic analysis of law in recent decades has been spurred by the conjecture, due in large part to the work of Judge Richard Posner, that the common law has an underlying economic logic (a claim that is not generally made about statutory law). An important goal of this book is to illustrate and evaluate this claim.

The methodological approach in this book is primarily neoclassical, reflecting the perspective of the so-called Chicago School of law and economics. In my view, this represents the predominant approach to the field as reflected by current scholarship, but it is by no means the only approach. Other perspectives, such as public choice and neoinstitutionalism, have also provided important insights, as have the various schools of thought that are critical of law and economics. These competing fields receive scant attention in this book given the goal of providing an in-depth treatment of “mainstream” law and economics rather than a broad survey of the field. (For such a survey, see Mercuro and Medema 1997, who refer to the Chicago School as “mainstream law and economics” [51].)

Another emerging field that is gaining influence among legal scholars and economists is called behavioral law and economics. The objective of this area of research is, first, to recognize that people’s actual behavior often departs from the traditional assumptions of rationality, and second, to apply the resulting insights to law. Since these insights touch on many areas of the law, references to this research are scattered throughout the book. Students and instructors interested in a fuller treatment should consult Sunstein (2000).

The outline of the book, which has changed somewhat from the previous edition, is as follows. Chapter 1 provides an introduction to law and economics and defines the specific concept of efficiency that will be used throughout the book. It also introduces the Coase theorem, which is perhaps the most important result that has emerged from the economic analysis of law, and also serves as a unifying concept. Chapter 1 concludes with a brief overview of the court system in the United States.

Chapters 2 through 8 constitute the core of the book and present a coherent economic theory of the law as a social institution. There are two chapters each on torts, contracts, and property, and a single chapter on the economics of crime. Many readers will be skeptical about the ability of economics to say much about crime in particular, but some of the earliest work in law and economics was done in this area, and it continues to be a vigorous field of research that has produced many insights on optimal punishment strategies. Chapter 9 turns to the economic analysis of legal procedure and the resolution of legal disputes. This chapter illustrates the ability of economic theory to explain how the litigation process works to resolve disputes, in both civil and criminal contexts. Finally, Chapter 10 surveys the economics of antitrust law. Many scholars refer to antitrust as the “old” law and economics, as it was the first field to which economists made substantial contributions. Recent advances in the area of industrial organization, however, have produced fresh insights that reveal the continuing vitality of the field.

For reasons noted shortly, the order of the chapters (especially Chapters 2–7) reflects a conscious choice, but instructors can vary the sequence to suit their own preferences. Also, the topics within chapters were chosen and organized to reflect my view of what constitute the key issues in a given area. Sections that discuss more difficult or esoteric topics, however, can be skipped for a more streamlined treatment.

Finally, a word about economic models. Economists rely on mathematical models to simplify the world and to highlight certain relationships while holding all other factors constant. In this sense, they serve the same function as controlled experiments in a laboratory. But students often question what can be learned by simple models that rely on a multiplicity of assumptions. This skepticism is especially evident in fields like law where students may be suspicious of the value of economics to begin with. The test of models, however, is the reasonableness of their assumptions (are we ignoring only inessential aspects of the problem being examined?), and their ability to generate verifiable predictions that can be tested against data or experience. Students are challenged to evaluate the models in this book based on these criteria.

Distinguishing Features of the Book

This book incorporates several features that distinguish it from other law and economic texts. Most importantly, the book emphasizes the ability of economic analysis to provide a coherent theory of the law. To accomplish this, I have limited the number of areas covered to permit an in-depth treatment of each, and I have also organized them in a particular way. Specifically, I begin with tort law, and proceed to contracts and then property. I chose this order because the key organizing model that I will use—the “model of precaution”—is literally a model of accidents and hence is best developed in that context. In addition, examining property last allows me to bring together several recurrent themes by way of summarizing the analysis.

A second unique feature of the book is that it is primarily directed toward undergraduate economics students. Other books, in seeking to satisfy both law students and economics students, have not addressed either adequately (law students want more law, and economics students more economics). This book does not attempt this difficult balancing act—it is chiefly an economics book. The decision to emphasize economics, in addition to allowing a more focused argument, has freed me to present the latest in law and economics scholarship, which, following the general trend in economics, has become more mathematical in recent decades. (Extensive references to the literature are provided in the endnotes.) Nevertheless, the book should be accessible to quantitatively oriented law students with some minimal economics training. (Calculus is not a requirement, and although the reasoning is in places rigorous, it is not heavily mathematical.)

A final feature of the book is the inclusion in each chapter of exercises designed to illustrate key points and to encourage students to “do” some law and economics. Answers to these in-chapter problems are provided in the back of the book so students can check their progress. In addition, several discussion questions and further problems are included at the end of each chapter.

Changes to This Edition

The major changes to this edition are organizational. The chapter on crime now immediately follows property, reflecting an effort to transition seamlessly from civil to criminal law. However, I have moved the discussion of procedural aspects of criminal law (such as plea bargaining) to the chapter on legal procedure, which now consolidates the analysis of dispute resolution. This facilitates a comparison of the similarities and differences between civil and criminal procedure. Finally, I reorganized the material in the two chapters on property to better distinguish between consensual (Chapter 6) and nonconsensual (Chapter 7) transfers (or regulation) of property rights. This crucial distinction culminates in the discussion of the general transaction structure, the key organizing framework of the book, which is now placed at the end of Chapter 7 by way of summarizing various themes that have run throughout the preceding chapters. Beyond these organizational changes, I have revised all other chapters in the book to reflect recent scholarship, updated data and graphs where appropriate, clarified existing arguments, and corrected errors.

As a supplement to the text, students and instructors may wish to visit the book’s companion website at http://sup.org/economiclaw/. The site provides a rich suite of resources, including a review of microeconomics (included as an appendix to Chapter 1 in the first edition); text from some key cases cited in the book; links to additional cases that can be paired with the book; discussion points, which deepen or supplement the analysis in the book; notes for use in an advanced (graduate-level) law and economics course; and key points to help students review the highlights of each chapter. The site also offers additional discussion questions that are meant to stimulate classroom discussion and/or provide topics for short papers or written assignments. Instructors may also gain access to an instructor’s manual that provides suggested answers to all of the end-of-chapter discussion questions and problems.