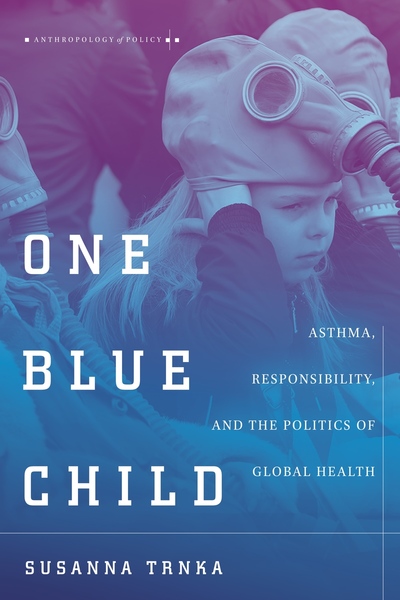 One Blue Child
Asthma, Responsibility, and the Politics of Global Health
Susanna Trnka

This chapter outlines what happens when health reforms designed to inculcate self-responsibility come up against older forms of relationality, obligation, and care. Drawing on the concept of "competing responsibilities," the chapter argues for the need to recognize the inherent interrelationality of care, outlining how even patients who embrace the ideals of acting like self-reliant, autonomous subjects are frequently forced to balance these alongside their obligations to others and others' efforts on their behalf. Moreover, in some instances, patients and their caregivers reject self-responsibility in an effort to recast obligation back onto the state or their physicians, demanding that the sick be taken care of, instead of being forced to become the facilitators of their own care. The result is a series of tensions as reformist agendas open up new opportunities and foreclose others, demanding a reframing of health and illness beyond the scope of neoliberal agendas.

This chapter examines how the adoption of self-managed care in New Zealand results in new forms of patienthood and medical authority. First, it outlines how revolutionizing the health-care system to promote policies of self-management has radically empowered some patients while severely disadvantaging those already marginalized. It then discusses a tension central in neoliberal discourses of self-responsibility: Although medical professionals encourage patients to take responsibility for their own care, they also feel a professional obligation to use their expertise to steer patients toward the behaviors they view as efficacious, resulting in frustration within the clinical encounter. Finally, it demonstrates how, in the drive to increase patient compliance, many of the same health professionals who embrace "patient choice" end up blaming patients for using medication "irresponsibly," thus creating the illusion that self-management is a foolproof system that fails only when individual patients lack the discipline to conform.

2 Domestic Experiments: When Parents Become "Half a Doctor"
chapter abstract

This chapter examines New Zealand parents' and children's perspectives of self-management, arguing that being forced to take on the role of the "patient expert" cuts both ways, overwhelming families unable or unwilling to manage their own care and granting greater control to families able to craft their own familial-based health-care routines. Aiming to achieve "normal childhoods" for their children, many New Zealand parents experiment with medication, revising dosages and guidelines based on their own experiential knowledge and, in the words of one mother, becoming "half a doctor" to cope with their child's condition. Although some of these parents view asthma as a chronic condition and encourage their children to adopt ongoing preventative regimes, others are strongly critical of the pharmaceutical industry and refute chronicity and, in some cases, reinterpret diagnoses in ways that radically recast "self-management" beyond what health authorities and policy makers have in mind.

Twenty-five years after the end of state socialism, the Czech health-care system is characterized by a constant weighing of market-based approaches against widespread public support for ensuring solidarity in health-care provision. This chapter looks at the place of personal responsibility in both new policies governing health care and associated ideologies of democratic citizenship. Focusing on clinical encounters and medical discourses about asthma, the chapter documents the tensions that emerge out of a health-care system that requires greater patient agency while denying patients a role in overtly shaping their own care to preserve the power of the medical elite. It concludes by demonstrating that, despite claims to the contrary, many Czech patients are agentive in medical encounters, using the tactics of gift exchange and personal networking to compel physicians to take responsibility for their care.

This chapter is about how Czech women navigate the tricky terrain of adhering to doctors' directives while crafting their own responsibility and authority over their children. Most mothers wish to carry out medical professionals' instructions but are also eager to exercise their own agency in determining home-based care. Many are also wary of overmedicalizing their children. Domestic space thus becomes a site where multiple kinds of knowledge come to a head: the expert knowledge of medical specialists, the experiential knowledge of mothers dealing with sick children, and widespread social understandings of medicines as both efficacious and dangerous. Out of the intimate tangle of interpersonal ties and obligations, modes of knowledge, and daily practicalities, there emerges a strikingly different sense of self, care, knowledge, and expertise than that of the neoliberal, autonomous, self-responsible subject.

This chapter focuses on the phenomenological aspects of breathlessness, examining the physical and mental aspects of living with asthma as well as the efforts of some New Zealanders to diminish or cure their asthma through the use of alternative therapeutic practices, most notably sports and Buteyko breathing retraining. Once lauded by family physicians as a route to coping with asthma, sports have largely fallen out of the register of the biomedical, acting today as an unsystematic "local" or "naïve" form of knowledge that nonetheless disrupts the hegemonic hold of pharmaceuticals. Buteyko, in contrast, is best described as a systematic "alternative" mode of respiratory therapeutics, invented under the auspices of (Russian) biomedicine and now existing on (Western) biomedicine's fringes. Both therapeutic approaches address the physical as well as the mental or emotional aspects of breathlessness and offer distinct counterpoints to the predominant biomedical focus on pharmaceuticals.

6 The Best Holiday Ever: The Pleasures and Pains of Spa Cures and Summer Camps
chapter abstract

In a March 2014 court decision, the Czech government asserted every Czech citizen's right to treatment in government-supported sanatorium-style health spas. Collectively administered and often authoritarian in nature, the therapeutic regimes enacted in these "total institutions" raise key questions about the roles of professional responsibility, pleasure, and discipline in promoting respiratory health. This chapter outlines the effects of both spa cures and summer asthma camps, documenting how removing children and their parents from their homes for four to six weeks at a time can set the stage for a comprehensive mind–body therapeutics, encouraging relaxation alongside discipline and compelling patients to reframe their understandings of what their bodies are capable of, despite their asthma. The disciplined pleasure of spa cures and summer camps, it is argued, is central to this experience, acting as a catalyst for new behaviors and new understandings of the body and health.

7 Redistributing Responsibility among States, Companies, and Citizens: Struggles in the Steel Heart of the Republic
chapter abstract

The city of Ostrava is famous for its residents' respiratory problems, with some scientists contending that it has the world's highest incidence of childhood asthma. Activists blame Ostrava's steelworks, owned by the multinational ArcelorMittal, which in turn suggests residents should do more to personally improve their living conditions. This chapter examines how respiratory illnesses get cast as a citizenship issue, inspiring national debate over whether the state, corporations, or individuals are the ultimate guarantor of citizens' rights. Drawing on prevalent tropes about working-class labor and vulnerable children, popular representations of Ostrava's woes portray a struggle between citizens who are suffering and a state not living up to its obligations. Harkening back to environmental protests that fueled the 1989 Velvet Revolution, such calls on the state suggest a "politics of last resort," positioning the state as the ultimate moral agent and source of responsibility for citizens' health and well-being.

This chapter delineates how health-care policies "problematize" asthma and the range of "solutions" such problems prompt, highlighting how seemingly inevitable facets of a phenomenon such as asthma care can, in fact, be constituted differently across different cultural contexts. The chapter outlines four key steps for improving asthma outcomes, ranging from enabling patients to coauthor their self-management programs to addressing the structural factors that determine respiratory health. It delineates how using open-ended, ethnographically grounded research enables us to move beyond the questions that occupy many public health professionals—how to improve the implementation of self-management—to gain a comprehensive understanding of the broader social dynamics and power structures that determine health. It concludes by suggesting how critiquing neoliberal visions of self-managing subjects necessitates not giving up the ideal of patient autonomy but recognizing how promoting patient autonomy requires taking seriously the inherent interrelationality of health.