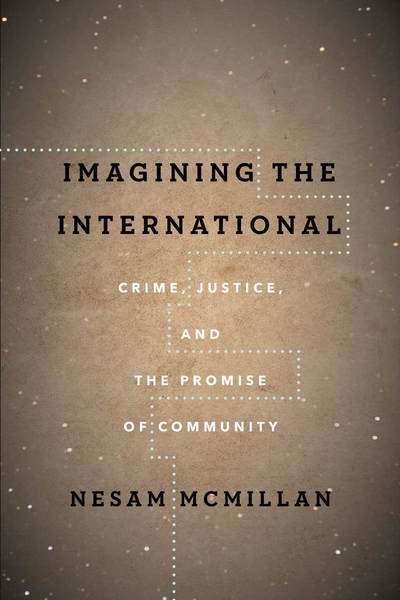 Imagining the International
Crime, Justice, and the Promise of Community
Nesam McMillan

2 "Rwanda": The Production of a Global Event
chapter abstract

Chapter 3 analyzes how the idea of international crime is given content. Focusing on the debates of the International Law Commission in its attempt to formulate a draft criminal code, I show how the commission linked internationality to a sense of (higher) scale—framing international crime as more important than other crime and as the most serious harm; as large-scale, mass harm; and as harm that affects generalized subjectivities and states (humanity and global peace and security). I argue that such a scalar approach distances external parties from the lived experiences of injury and perpetration, which are portrayed as exceptional and extreme. It also involves a "zooming out" in which the focus shifts from specific peoples and communities to more abstract notions of humanity as a whole.

Chapter 4 analyzes dominant understandings of international criminal justice. Through a focus on representations of the first permanent International Criminal Court, I demonstrate how the court is figured as culturally, politically, and geographically transcendent by contrasting it with images of a more politicized and contextualized national and local. Using the work of Peter Fitzpatrick, I argue that this ideal of international criminal justice is mythical, relying on an intentional disregard for the way in which the court is located, political, and connected to the national, as well as being a distinctive legal institution. Drawing on postcolonial theory, I then ground the court by highlighting its particularity and locatedness.

Based on the book's analysis, the conclusion argues that there are significant, perhaps insurmountable, problems with the ideas of international crime and justice. Although they are imbued with humanitarian promise, these ideas can create relational distance between people who have experienced international crime and those who have not. They spectacularize, hierarchize, and appropriate the suffering of others and promote an ideal of justice that is fundamentally disconnected from the everyday. I contend here that they also figure internationality and international interconnections in ways that resemble past colonial approaches. Given that these problematic tendencies relate to both the content and the contemporary valorization of ideas of international crime and justice, I offer a fundamental critique of both. The aim of this critique is to raise the possibility of alternative ontologies of international engagement that might be more respectful of specificity and grounded in the lived and the everyday.