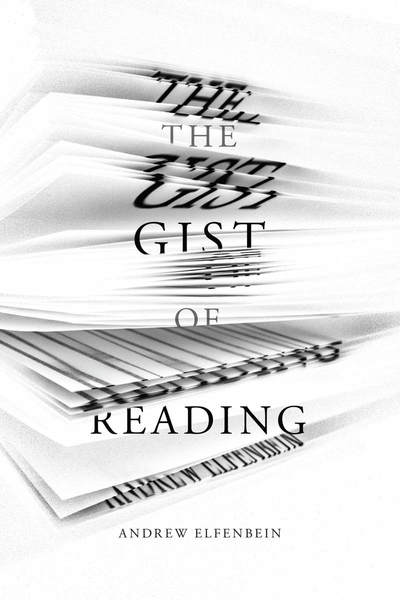 The Gist of Reading
Andrew Elfenbein

Chapter 1
Contents
Contents and Abstracts
Introduction: Interdisciplinarity: I, Too, Dislike It
chapter abstract

The introduction discusses challenges in adapting findings in empirical psychology to literary criticism. It outlines the disciplinary divisions between the two areas of study and describes the barriers they can pose to mutual understanding, such as the privileging of the general over the particular in psychology and the assumption by literary critics that psychological findings from the present cannot be relevant to earlier historical periods. The chapter responds to these objections and to the assumptions underlying them, and then provides an overview of the book.

The chapter describes the nuts and bolts of the processes that the mind coordinates to make comprehension occur. Although these processes have not traditionally been part of the scholarly understanding of literary reading, examining them helps us to analyze hitherto-neglected aspects of reader response even in long, complex literary texts. The vocabulary developed to describe bottom-up processing helps scholars pay closer attention to readers' actions during and after reading. Ambiguity resolution, alliteration, anomalous suspense, and learning false facts from fiction are discussed.

The second chapter looks at three exemplary readers, one fictional and two real. In each case, reading is analyzed moment-by-moment to demonstrate how the same conceptual framework allows the interpretation of three very different readers. The first is Mr. Knightley in Jane Austen's Emma as he reads and responds to a letter. Austen makes visible in this passage core aspects of top-down reading that have been often overlooked by critics. Next is most famous reader-response critic, Stanley Fish, and his interpretation of a sentence by Walter Pater. His reading manifests some of the difficulties of reader-response criticism; vocabulary from psychology helps disentangle reading and interpretation in Fish's passage. Finally, a reading protocol from a student reader struggling with a challenging short story, Leane Zugsmith's "The Three Veterans," demonstrates how readers work with difficult material. Limiting inferences in response to perceived difficulty increases problems with comprehension.

3 Reading On- and Offline
chapter abstract

The third chapter describes how bottom-up and top-down processes combine for four nineteenth-century readers confronted with particularly hard material, Robert Browning's Men and Women. Browning's difficulty encouraged readers to be explicit about their reading processes in ways that make later analysis possible. It also introduces standards of coherence as a concept enabling a crossing-point between psychology and history. Its second part moves from online to offline reading to examine reader memory and the concept of gist. A genre of poems designed to represent the state of a reader's mind after reading demonstrates the rise of the imagined author as a retrieval cue for long-term memory and as a standard form of gist memory. It traces the rise of the imagined author in nineteenth-century criticism and its problematic demise in twentieth-century New Criticism.

The fourth chapter examines the history of reading as an activity that was understood to be at its best when it was difficult. Using the vocabulary developed in earlier chapters, it offers a psychological re-description of "hard reading." The tradition of valuing hard reading stemmed from guides to reading the Bible; the chapter provides the first extensive overview of these highly influential works. It then examines how David Stow in Scotland and John Ruskin in England adapted the guides' approach to reading as hard labor. Finally, it turns to the effect of Ruskin on institutions of education by examining the test case of the American high school reception of George Eliot's Silas Marner.

The fifth chapter explores the history of the association of reading with ease. It examines an important strand for this concept coming from the history of rhetoric, which argued that good writing ought to anticipate a reader's needs so well as to require minimal reader effort. It contrasts this model with another model of easy reading, in which readers are understood to be so interested in what they are reading that they lose track of time and place while they read. It then moves to extensive archival records of nineteenth-century novel readers to understand how they understood easy reading. It demonstrates the centrality of evaluative responses to novels, of the encoding of time and place in reader memory, and of the tendency for certain short segments of novels to become exemplars for readers of world knowledge.

This chapter provides a detailed model of literature as entertainment. It argues that a combination of perceived competence, autonomy, and desire for relatedness drive readers to choose novels; that, while they are reading, readers look for interest, self-relevance, and transportation; and that, finally, readers evaluate their experience. To explore this model for nineteenth-century readers, the chapter examines reactions to two novels that reviewers agreed were the worst that they had ever read (Gustave Strauss's The Old Ledger and Eliza Humphreys' Like Dian's Kiss). These novels were so bad that readers' reactions are especially revealing about what they thought had gone wrong: in the process, they model what nineteenth-century readers believed made reading entertaining. Their reactions provide the background to an interpretation of a better-known novel, Charles Dickens's The Old Curiosity Shop, and its metamorphosis from one of Dickens's least successful works to one of his hits.

The final chapter uses literary influence to explore some of the shortcomings of the empirical study of reading and speculate about questions that are as yet not easily answered within its terms. The case study is Oscar Wilde's The Picture of Dorian Gray and its extensive engagement with prior literature at the level of both passing allusion and large-scale plot structure. It argues for the importance of recognizing that influence occurs on a sliding scale of depth, from shallow passing allusions to general cultural clichés to deep, sustained engagement with the work of a single predecessor. At the local level, the chapter looks at Wilde's engagement with cultural stereotypes about Jews and with the poetry of Keats and Tennyson. At the global level, it explores his revision of the plot structure of Mary Ward's blockbuster Robert Elsmere.

Although this book has an interdisciplinary focus, its goal is to bring to attention basic unanswered questions in literary scholarship. These concern the best way to understand links between elements in the communication chain: author, message, context, code, medium, message, and audience.