STANFORD
UNIVERSITY PRESS
The Costs of Connection
How Data Is Colonizing Human Life and Appropriating It for Capitalism
Nick Couldry and Ulises A. Mejias 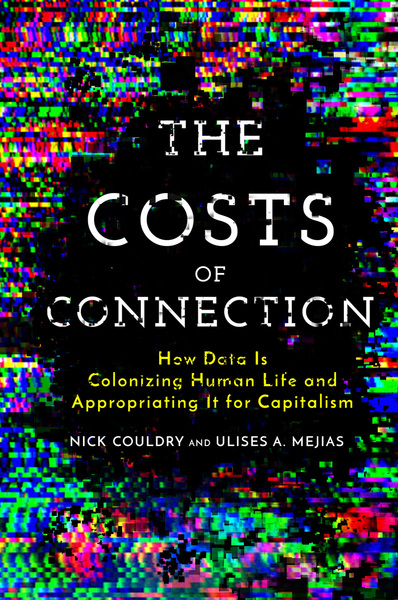 The Costs of Connection
How Data Is Colonizing Human Life and Appropriating It for Capitalism
Nick Couldry and Ulises A. Mejias

This chapter draws readers into the argument by asking: How can it be that there is something "colonial" about the everyday relations we have with apps and other devices that want our data? The basic feature of today's data colonialism is explained: the appropriation, not of physical territory but of human life itself, through data extraction. The double nature of the book's argument is laid out, an argument about a new and shocking colonialism, close to home, and the social and economic order that colonialism builds for capitalism. This double argument helps us see the true time scale of what is happening with data: less a new capitalism than a new phase in the five-hundred-year history of colonialism's intertwining with capitalism. Other key terms of the book's argument are introduced, including the dubbing of data corporations and platforms as the "social quantification sector."

1 The Capitalization of Life without Limit
chapter abstract

The key moves on which the book's argument centers are explained in this chapter. Historic colonialism meant four things: (1) appropriation of resources, (2) unequal social relations, (3) unequal distribution of economic benefits, and (4) "colonial" ideologies that attempted to justify all this. These four features persist in data colonialism through the ideology of connection. But the emerging order has a distinctive geography, both external and internal and led by both the West and the East. New data relations commit human beings to continuous extraction, but the origin of this new order goes far beyond social media and can be traced to a principle already found in logistics and the management of supply chains. The book's differences from other prominent critiques of capitalism are also explained.

The focus of this chapter is the way the social quantification sector has organized an extractive infrastructure, and the way this infrastructure is being naturalized and extended across all social domains in a totalizing model referred to as the Cloud Empire. A discussion of how the Cloud Empire came to be and how it works is presented: apps, platforms, and smart technologies capture and translate our life into data; artificial intelligence algorithms then pore over the data to extract information that can be used to sell us our lives back, albeit in commodified form. The major and minor players that comprise the social quantification sector are analyzed in the context of the dual poles of the new empire: the United States and China. Finally, the chapter considers the implications for how the Cloud Empire is shaping the economy and the workplace.

Interlude: On Colonialism and the Decolonial Turn
chapter abstract

For readers unfamiliar with the history of colonialism, this chapter provides a free-of-jargon overview of its political and economic development. The chapter begins by tracing the roots of colonialism to the arrival of Europeans in America, and it distinguishes between earlier forms of imperialism and European colonialism. Colonialism is described as a set of practices and ideologies that created violent systems for exploiting and oppressing colonized environments and peoples and that eventually made possible the emergence of industrial capitalism. These systems included modes of representing the colonizer and colonized and of organizing the production of knowledge. Postcolonialism and decoloniality are explained as the two key responses to that legacy. These responses, especially the more recent notion of decoloniality, not only question the "natural" colonial order but try to imagine alternative ways of life that reject capitalism and colonialism as universal and exclusive models for organizing humanity.

If data colonialism works by appropriating social resources, it can be fully understood only in a historical perspective that sees its parallel with earlier colonialism, a continuity that theorists call coloniality. By bringing historical research on colonialism into conversation with internet studies, this chapter explores the parallels between past and present in terms of the 4X's of colonialism throughout history: explore, expand, exploit, and exterminate. Specifically, this chapter argues that historical colonialism and data colonialism share some fundamental structures: the way the colonized subject is conceptualized and how colonialism shapes how the colonized think of themselves; the naturalization of certain ways of governing subjects and organizing life; and the legitimation of certain types of knowledge associated with powerful colonial centers. The result is a social and economic order in which subjects become estranged from their basic realities as living beings: truly, a new form of coloniality.

4 The Hollowing Out of the Social
chapter abstract

Drawing on parallels with how market societies emerged under industrial capitalism (for example, through new quantifications of social life), this chapter details how society is being rebuilt to generate continuous flows of data for profitable extraction. Older forms of social knowledge based on public investment that compensated for the horrors of industrial capitalism are overridden, replaced by new social "knowledge" that is entirely under corporate control and gathered much less transparently than previous knowledge. Our data is "cached" everywhere and aggregated to generate hidden social discriminations that, in turn, generate profit. Corporations' view of the social world is not accountable to citizens or governments, yet it reshapes the language of social description. In the emerging world, social governance gets delegated to proxies that pay little attention to human voices. Social science, in love with data and disenchanted with human rationality, is complicit in this hollowing out of the social world.

5 Data and the Threat to Human Autonomy
chapter abstract

This chapter examines the general threat to human subjects that data colonialism poses when the very bases of human autonomy are undermined by endless monitoring and tracking. Surveillance has always been incompatible with human freedom; even if the information gathered is not used against us, we know it might be. That chilling effect is exceeded by the realization that installing external systems of monitoring into everyday life, at ever deeper levels of penetration, violates one's idea that one is a self, a being securely marked off from external power. The "quantified self" movement turns a blind eye to this damage. European and Latin American philosophy can help us see the incompatibility between data colonialism's surveillance practices and human autonomy. Privacy law's challenges to this threat in Europe, the United States, and elsewhere are examined but are likely to be insufficient.

Today's vision of continuous data collection is just the latest attempt to impose a way of ordering the world to suit particular interests. Thus, data colonialism's social order must be resisted but not through tactical moves or policy tweaks. A whole social order must be challenged, since data colonialism is toxic for the ecology of human life. This chapter explores a different way of thinking about how human life can be ordered, a vision that respects diversity and the right of human beings to make their own decisions about what data is collected about them and why. Human beings must engage in a multifaceted project of common research and discovery, stretching far beyond the walls of the academy, to understand the impact of data colonialism at both the particular and the global levels, and to build tools for understanding data's new world and imagining a different one.

This short chapter recalls how inevitable the forward direction of data colonialism is regularly presented to be, and it invites readers to imagine another way, a space to the side of data colonialism's road where another future can be built. How? Through new forms of connection that preserve rather than undermine fundamental human values and that do not carry the heavy costs of today's colonialist infrastructure. We must no longer stay silent about the choice being forced on us.