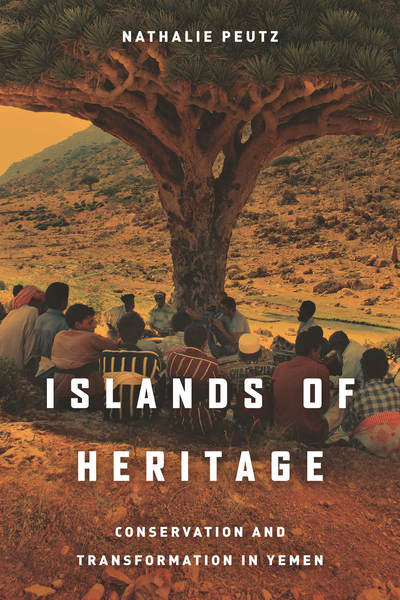 Islands of Heritage
Conservation and Transformation in Yemen
Nathalie Peutz

Beginning with an anecdote of a Soqotran teacher convening a political protest (during the Yemeni Revolution) and a poetry contest on the same day, the Introduction asks how heritage (a nominally conservative endeavor) and revolution (a nominally transformative endeavor) could be connected. It lays out the importance of studying heritage. It reviews the history and politicization of heritage in the Arab world. And it provides a geographic and historical overview of Yemen's Soqotra Archipelago, a UNESCO-inscribed natural World Heritage Site with a long genealogy of being deemed exceptional and "protected." It then describes the author's fieldwork and methodology. It concludes by arguing that, despite important arguments for working to transcend the nature-culture divide (in heritage making, as in other things), certain "islands" (boundaries) may be productive.

This chapter introduces readers to a transhumant pastoralist community living in a newly established protected area (Homhil). It shows how the unprecedented opening of Soqotra gave rise to a crisis of hospitality, a long-held cultural value. Soqotrans' discourse of hospitality (karam) in crisis reveals significant mutations in the island's political economy and social structures, precipitated by its 1990 absorption into the unified Yemeni state and its transformation from a militarized enclave to a national protected area. Karam (and the ostensible lack of it) has become the idiom through which the islanders have been processing these changes. In light of current debates in the West about the dangers of "hosting" (im)migrants, this chapter points out that, in Soqotra, the crisis was exacerbated not nearly as much by Soqotrans' fears of being too hospitable as by their concern that they were no longer being hospitable enough.

2 Hungering for the State
chapter abstract

Due to the archipelago's annual isolation during the southwest monsoon, in addition to its arid climate, Soqotrans are no strangers to food insecurity or famine. Accordingly, their interactions with each entering state—the Sultanate, the British Protectorate, South Yemen, and the Saleh regime—have been mediated by food. Yet, as this historical chapter demonstrates, it was not only the state's administration of food that governed Soqotrans' interactions with each regime. Soqotrans have a long history of feeding—and simultaneously "hungering" for—the state in return. Drawing on oral histories, archives, and interviews, this chapter surveys Soqotra's political history as one governed through food, famine, and fear. It argues that Soqotrans may have experienced physical hunger in the past, but in the 2000s they hungered for a state that would provide real and lasting sustenance.

3 When the Environment Arrived
chapter abstract

This chapter discusses the implementation of four major integrated conservation and development projects (ICDPs) between 1996 and 2013, which resulted in the archipelago's inscription as a UNESCO natural World Heritage Site. It begins by reviewing how these projects were preceded by the decades-long arrivals of foreign researchers and the continued dissemination of their ideas about Soqotra's environmental exceptionality. It then discusses the establishment of environmental legislation in unified Yemen (post-1990) and details the various ICDP projects that were implemented on Soqotra during this period. It ends by describing two "environmental awareness" meetings in the protected area (Homhil). Drawing on project documents and literature, observation of rural outreach and environmental awareness programs, and daily participation within a the protected-area community, this chapter reveals why "the Environment," as project and concept, failed to mobilize these pastoral communities so dependent on their natural surroundings.

This chapter presents an ethnographic narrative of the material, social, and political effects of several conservation-and-development initiatives in a pilot protected area inhabited by pastoralists (Bedouin). It focuses on the implementation of three development projects by the Socotra Conservation and Development Programme: a new tourist campground, a community home garden, and piped water. Although these projects were meant to improve the pastoralists' material well-being, they wound up pitting leaders, tribes, villages, and men and women within the community against one another. Through a close "mapping" of these tensions, this chapter underscores why, in these pastoralists' view, "the Environment" had little traction—despite its strong influence in the island. As a result, some Soqotrans sought to preserve their livelihoods by shifting their focus to cultural heritage instead.

This chapter focuses on the influence of the Soqotran diaspora in island politics in the decade preceding the 2011 revolution. Beginning with an overview of the three major phases of twentieth-century emigration from Soqotra to the Arab Gulf, it illustrates how pervasive these Soqotra-Gulf connections were and are. It explores the ways in which emigrants politicized Soqotran identity, culture, heritage, and history through their histories, their poetry, and the island's first museum. And it examines the ways in which the diaspora sought to denature and reorient Soqotran heritage by shifting the focus from nature to culture, from Soqotran autochthony to Arab descent, from Indian Ocean hybridity to genealogical purity, and from the Yemeni nation to the transnational Gulf. These heterogeneous, kaleidoscopic, and entangled processes of heritage making reveal a deep-seated anguish over past political events and an ongoing struggle to reorient Soqotra's future.

6 Heritage in the Time of Revolution
chapter abstract

This chapter discusses how the islanders mobilized cultural heritage in the years bracketing the Yemeni Revolution, when several positioned themselves as "para-experts" alongside foreigners working for the environmental projects. It explores three individuals' growing interest in heritage as a political and profitable resource. It examines debates over the contours of this heritage. And it traces the development of an islandwide poetry competition, its overt politicization in the wake of the Arab uprisings, and the eventual recognition of the Soqotri language in the draft constitution for the new Yemen. It argues that Soqotrans' preoccupation with their cultural heritage during this period bears a strong resemblance to nineteenth-century European nationalists' "cultivation of culture." Thus, it was not a provincial, insular, or even conservative concern. Rather, it reflects a distinctly twenty-first-century realization that vernacular languages and endemic species are on the verge of extinction.

The Conclusion provides an overview of the current humanitarian crisis in Yemen and Soqotra's renewed isolation since Yemen's civil war began in 2015. It underscores what a small group of Soqotran laymen (para-experts) were able to achieve through their mobilization of cultural heritage during a time of crisis, before the war. It then briefly discusses the two most recent, and potentially competing, visions for the archipelago: UAE-funded development and a new, Global Environment Facility (GEF)-funded conservation-and-development project. It offers suggestions for how ethnic and linguistic minorities like Soqotrans can be supported in their cultural work. And it concludes with some lessons learned from the author's interlocutors.