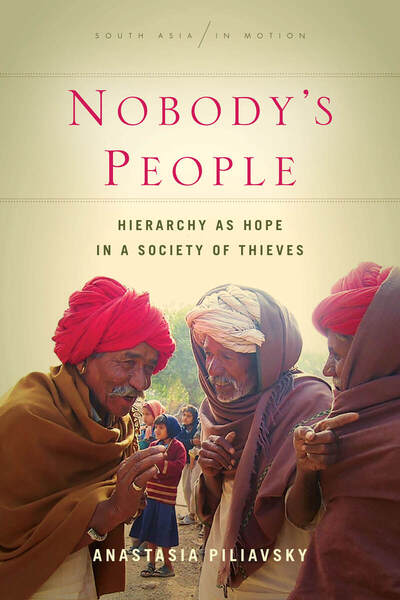 In 1991 a hamlet in southern Rajasthan, where the author conducted her research, was nearly razed by a pogrom. Decades later, its perpetrators felt no regret or remorse for the violence. Their victims were Kanjars, a caste of professional thieves and the most marginal local community. Parsing out the moral logic of the pogrom, Piliavsky argues that Kanjars are untouchable among the untouchables not because they are ritually most polluted, but because they are socially least attached. Asymmetrical ties with patrons are essential to the local calculus of people's worth, making hierarchical norms central to the logic of social ambitions. Challenging the egalo-normative commitments of writings on social mobility and aspiration in South Asia, and engaging critically the work of Louis Dumont, the prologue introduces the book's central argument: that hierarchy—as opposed to inequality—can drive social ambition, recognition, and hope.

Many in India look to hierarchy as a social good that helps them pursue better lives. Social scientists, conversely, tend to see in hierarchy a system of oppressive stasis. In a wide-ranging reflection on social theory, chapter 1 outlines how its egalo-normative bearings and the old Christian idea of hierarchy as a "pyramid" have produced a caricature of hierarchy as a motionless whole, making it impossible to see why people the world over value it. It argues that hierarchies of all kinds always involve a logic of mutual responsibility structured by difference. Expressed in the idiom of patronal or parent-child relations, these norms do not imply or produce stasis; rather, they are inherently asymmetric, unstable, and dynamic. Outlining how hierarchical norms play out in patronal relations in Rajasthan, Piliavsky challenges the hoary contrast between "holism" and individualism, and outlines a vision of hierarchical individuality.

2 The Lords of Begun
chapter abstract

Chapter 2 reveals Begun, a market town, whose layout and history reflect major hierarchical principles. The town is organized concentrically around a citadel—the home of the local hereditary lord, the Rao—according to degrees of intimacy to the royal family, not by degrees of ritual purity and pollution. The highest ranking castes, with homes in the town center, are the Rao's closest, most experienced servants, while those lower and farther out have been more loosely employed by others. Developing an old argument about "centrality" as the organizing principle of caste, this chapter shows that the town and its social hierarchy were traditionally organized like a family, where the Rao was styled as a "father" and his servants as "children." The respective obligations to care for one's servants and to serve one's master are framed in this familial moral idiom that is pivotal to the broader logic of hierarchy.

3 The People Who Were Not There
chapter abstract

While relations with Kanjars are denied in polite company, local aristocrats, farmers, and policemen engage them as watchmen, thieves for hire, and dispute negotiators. As such, Kanjars enter the innermost domains of life, while being denied public recognition. Both beneficiaries and victims of their invisibility, they profit from being employed as "secret agents," while ultimately losing out on the recognition that only openly recognized bonds with patrons afford. While running an often lucrative trade, Kanjars remain reputationally offstage—invisible, masterless, unattached—and so, in the eyes of others, lack a proper, cogent self, and thus any social value. For them, the moral significance of patronal attachments is really and truly a matter of life and death. The moral and social outsider can be disposed of casually, with no moral consequence or qualms.

The history of people who have come to be known as Kanjars is a story of a long and frustrated search for patrons, who would care for them and imparting on the community the existentially crucial belonging they long for. Tracing Kanjar history to the 16th century, when the name "Kanjar" first applied to itinerant entertainers at the Mughal court in Delhi, the chapter follows the story of North India's "vagrant" communities engaged as bards, spies, prostitutes and watchmen-cum-thieves for centuries and until this day. "Kanjar," a name of disrepute (today synonymous with "whore," "bastard," or "pimp"), stuck to communities that failed to attach themselves securely to reputable masters, while those succeeding in doing so had acquired more attractive monikers and position in life. While showing the enduring moral significance of asymmetrical bonds, this history also demonstrates the extraordinary historical lability of caste.

Once a year Kanjars, like other Hindus, stage the festival of Navaratri, the nine days during which they celebrate their patron goddesses. For Kanjars, however, the festival carries special significance. As a people who lack suitable ties with human patrons, Kanjars valorize their attachments to goddesses, seeing them as the chief source of their collective self. Through the microcosm of the ritual process, and the minutiae of the exchange that takes place in its course, the chapter demonstrates the existential significance of patron-servant ties and the mutual constitution that these involve. Here, while the goddesses are manufactured by their Kanjar servants, Kanjars quite literally eat the goddesses, and so take on their substance, or khandān. The same logic of mutual constitution guides relations with human patrons.

6 Who and Whose
chapter abstract

A masterless, unattached people in the eyes of others, Kanjars do have human patrons, who play a decisive role in ranking inside the community. The Kanjar caste is divided into those who work as bards, watchmen or thieves, and prostitutes. The segments of the caste are ranked, it is argued, not through moral judgments of their occupation, but on the basis of how tightly their work ties them to particular, precisely specified patrons. The more narrowly specified are these ties, the better the segment's standing. Kanjars involved in prostitution entertain an unrestricted array of patrons and so rank lowest of all, while the thieves with (actual or remembered) bonds to jajmāns among Rajputs, farmers, and the police rank the highest. What matters for social integrity is the integrity of social bonds. Here to be is to belong.

This chapter takes readers into the thick of the electoral politics of Begun. Following two Kanjars, the Rao of Begun, and other political players during the 2008 state election campaign, the chapter shows how the hierarchical principles described in Begun shape the democratic process: orienting political strategies, inflecting voters' judgment, and structuring the rise and fall of political fortunes. The expectation to care for one's people, which lies at the heart of hierarchy as a moral logic of responsibility, gives rise to pervasive disappointment and gives meaning to a distinctive local sense of "corruption," as a failure of relations, rather than a failure of public office. Hierarchy emerges as the chief normative frame of local democracy.

8 Every Man a King
chapter abstract

Understood as a moral logic of mutually beholden relations, hierarchy is not confined to provincial India. It is the basic idiom, it is argued here, of social ambition and hope, anywhere in the world where these are valued. While assertively egalitarian societies (mostly small-scale communities) curb personal ambitions, hierarchy—or difference that makes a difference—is fundamental to one's ability to improve one's life. In contemporary metropolitan imaginations, where equality is now (formally) the topmost sacrosanct value, hierarchical norms have not been supplanted, they have been transvalued. People have not been leveled, but have been leveled up through the hierarchical idioms of "respect" and "dignity," which have become the pivotal tropes of current global egalitarianism. Hierarchy is thus not only important in rural North India, but remains a powerful structuring force within stridently egalitarian moralities, the "egalitarian" social settings, which make, in Huey Long's words, "every man a king."