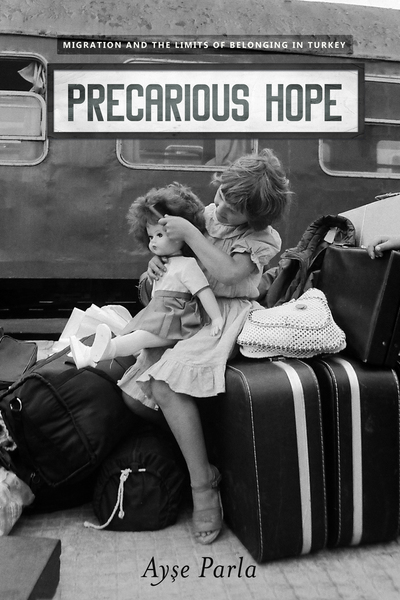 The introduction maps the contours of Turkey's migration regime, highlighting its peculiarities in terms of minimal regulation, its excessive reliance on circulars and exceptions, and its religious and racialized criteria for who qualifies as a migrant. It provides a historical overview of migrations from Bulgaria to Turkey since the twentieth century to situate the predicament of the post-1990 labor migrants. It thus presents the ways in which the deep-seated alliance between religious identity (Sunni-Islam) and ethnoracial identity (Turkishness) have defined the legal and affective structures of belonging in Turkey, which in turn, constitute the structural conditions of possibility on which the hope of contemporary Bulgaristanlı migrants rests. The chapter also outlines the theoretical approach taken to hope as a collective structure of feeling that is simultaneously conducive to perseverance and complicit in exclusionary acts.

This chapter probes the cultural significance and legal ramifications of the category of soydaş (racial kin) claimed by the Bulgaristanlı. It locates the status of being soydaş within the hierarchy of otherness produced by Turkey's citizenship regime. Presenting a historical account of migration policy toward soydaş since the founding of the Turkish nation-state, it explains the ebb and flow in the privileges granted to soydaş through a constellation of factors that include ethnonational appropriation, transpolitical instrumentalization, and labor market exploitation. The chapter demonstrates how the status of soydaş both enables legal and cultural access and also reinstates a distance from unmarked belonging. Such strategic but uneasy appropriations of identification as soydaş provide a window onto the hegemonic grammar of racialized citizenship in Turkey not from the point of view of those who are most marginalized but from the point of view of the relatively privileged.

This chapter explores the political and affective economy of hope. It demonstrates how the hope for legalization is differentially distributed and embodied across different migrant groups. This chapter develops the notion of "entitled hope" to characterize the hope cultivated by the Bulgaristanlı migrants. Rather than hoping against the odds, entitled hope veers closer to expectation and draws on a different lineage of thinking about hope that locates its kernel in rationality and attainability. In its emphasis on hope as "structured expectation," this chapter presents ethnographic accounts of the expressions and performances of hope that Bulgaristanlı migrants enact and take for granted in their encounters with the law. Finally, even as this chapter attends to the affective aspects of the differential distribution of hope, it argues against an ontological or epistemological gap between affect and emotion.

If the notion of entitled hope is intended to highlight expectation and likelihood, the notion of precarious hope that is elaborated in chapter 3 aims to capture the uncertainty, unpredictability, and insecurity that mark the experiences of Bulgaristanlı migrants. The chapter presents thick descriptions of precarity experienced by Bulgaristanlı women as they cross the border, interact with officials in the formal and informal spaces of the law, fend off gendered harassment, try to register their children in school, and work in the exploitative market of domestic labor. Heeding the ever-present tension between privilege and precarity in the experiences of Bulgaristanlı migrants who are neither entirely exposed nor entirely protected in their legal and economic status, this chapter also attempts to demarcate the concept of precarity from vulnerability.

Although ethnic affinity provides a certain protection from the marginalization and harassment routinely faced by other undocumented migrant women in Turkey, the Bulgaristanlı women's morality, too, can quickly become suspect if they are perceived as straying too far from expected gendered norms of dress, demeanor, or work habits. Bulgaristanlı women, in turn, counter the resentment of the class- and gender-based marginalization they suffer through recourse to post-communist nostalgia. Rather than reducing post-communist nostalgia to a melancholic attachment to an idealized past, chapter 4 explores the ways in which Bulgaristanlı migrants utilize post-communist nostalgia as a resource to manage their uneasy reception in Turkey. Considering the temporalities of hope in their full range, the chapter also suggests that any residual attachments to the communist past are manufactured into hopes for a more secure future.

The concluding chapter brings together the theoretical grounds and the ethnographic terrain covered in the book to posit hope as a criticizable category of analysis and experience. It challenges neat distinctions between goal-oriented hope and open-ended hope by foregrounding the struggles of migrants who hope for the reasonably expected rather than desire the wildly unexpected. It discusses the troubling implications for migrant activism of associating hope only with possibility at the expense of probability. The conclusion reiterates why it is not only crisis-laden hope that carries significance. Hope that is emboldened by a sense of entitlement but that nonetheless remains precarious speaks to a larger predicament in which increasing numbers of migrants and citizens grapple with a relentless anxiety that is barely held in balance by the production and collective cultivation of hope within structures of inequality.

A Note on Method, or Hopeful Waiting in Lines
chapter abstract

This short chapter describes the scope, duration, and sites of fieldwork as well as the different ethnographic methods deployed. It also discusses questions of categorization, positionality, and the relationship between ethnography and epistemology, especially as it pertains to research on emotions.