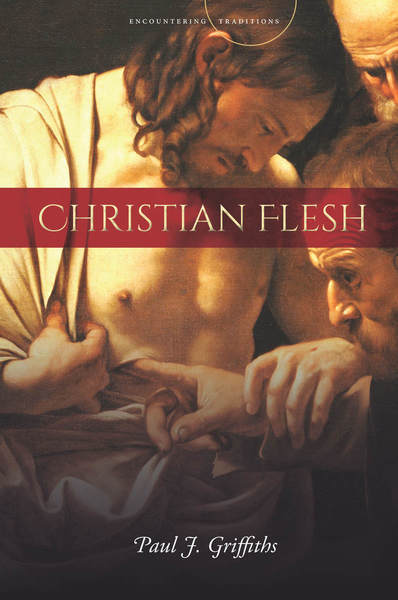 In this book I offer a speculative theological depiction of human flesh in general and Christian flesh in particular. I write as a Catholic theologian who has in mind the deliverances of the teaching Church on the matters I write about; sometimes those deliverances surface, more often they don’t, but they remain a constant informing presence. I intend, principally, clarification and speculative extension of the grammar of Christian thought and talk about human flesh. That purpose entails a deep unlikelihood that all the speculative positions I entertain and defend in this book are true. But since one of the theologian’s tasks is to sketch patterns of thought and argument that grow from orthodox Christianity but are not (yet) part of it, that isn’t a problem. Theology should be, first and last, about and responsive to the triune LORD who is its principal topic; it should then seek to be interesting; it is no part of the Catholic theologian’s remit to be right.

I build here upon positions taken in earlier works, specifically Intellectual Appetite (2009), my commentary on the Song of Songs (2011), and my eschatological treatise Decreation (2014). I’ve learned a good deal from criticisms of those works, and have modified some of the positions entertained in them and dropped others. But in many cases, the positions offered in this book have roots in and presuppose sketches and arguments given in more detail in those earlier works, and for this reason I refer readers to them.

The method adopted here is direct and simple. It’s grammatical: I attempt to write what can be written about human flesh using the lexicon and syntax provided by (a particular construal of) the Christian theological tradition. There are a few arguments in the book, but mostly it’s a depiction of what might reasonably, if speculatively, be taken as well-formed utterances of a Christian sort about human flesh—and, concomitantly, a depiction and rejection of ill-formed utterances about that topic. Apart from fairly detailed engagement with some passages of Scripture, I largely eschew explicit engagement with texts from the Christian archive in pursuing these purposes. That’s not because I despise such texts, or think there’s nothing to be learned from them. Quite the reverse. Much of what I’ve written here is stimulated by what I’ve read from the archive, and there are, as the knowledgeable reader will easily see, many echoes of, disagreements with, and affirmations of what’s to be found there. I choose not to quote or engage in exegesis mostly because the lines of a sketch are easily obscured by doing that, and what I hope for is a clear line. Proceeding principally by way of exegesis often, perhaps typically, derails theology by devolving theological argument and theological-grammatical sketch into recursive exegetical debate about how to read Thomas or Augustine or Barth or von Balthasar or . . . Those debates have their place; Christian theology can’t do without them. But there’s also a place for theology done in the mode offered here, and there is, it seems to me, in the anglophone Catholic world, a special reason for writing as I write here. That reason is that anglophone Catholic theologians aren’t very good at theology and aren’t very good at English. (Most Catholic theologians who think they are writing in English are hag-ridden by Latin and German and French, the Western languages of weight for the tradition, and so write something that isn’t quite English, a Catholic hybrid of a rebarbative sort.) I include myself in both these criticisms. Improvements are possible, but they won’t happen unless the task is faced directly, as I try and fail to do here. I had these points forcibly put to me by Tony Kelly in a bar in Melbourne in the (Australian) winter of 2014, and he’s right; he’s among the few anglophone Catholic theologians who do write theology in English.

Some conventions to note: LORD, uppercased, represents the divine name. When I use “god,” I lowercase it, initial and all, unless I’m quoting someone else who doesn’t. The reasons for this are provided in Decreation. I quote and elaborate upon Scripture always and only in the Latin of the Nova Vulgata. The justification for this is given, over-elaborately, in my “Which Are the Words of Scripture?” (Theological Studies, 2011). I provide no notes, whether foot- or end-. For readers who’d like to track down the texts I write about (there aren’t many of them), I provide enough information in my text to make that easily possible. The (few) translations from nonscriptural works not composed in English are my own. And for the grateful acknowledgment of intellectual debt, there’s the list of works consulted at the end of the book. More than that would detract from the book’s method and purpose, betray my own lack of erudition, and very likely hew to an intellectually bankrupt and un-Christian understanding of intellectual property. I do provide, in the text, parenthetical references to numbered sections of this book, in which a point made in one place is developed in more detail in another, or in which useful background for understanding a point made in one place is given in another.

Lastly, about pronouns. “We” means one of three things: you and me, reader, the two of us working together; or, we Christians—you may not be one, and if you’re not you can eavesdrop; or, we human beings. “You” picks out the one reading these words now. “I” indicates the one writing these words now. I don’t use pronouns for the LORD, but do for Jesus, gendered masculine. And for the rest I follow ordinary English conventions.