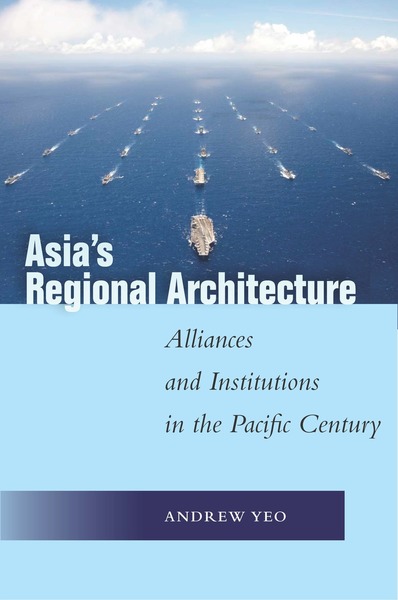 This chapter presents a new theoretical framework for understanding the development of Asia's regional architecture. Drawing on historical institutionalism, the chapter discusses how endogenous processes of change, as well as mechanisms of continuity, have produced a layering of bilateral, trilateral, mini-lateral, and multilateral institutions in Asia. The chapter also discusses the limitations of theories of rational institutional design, and the role ideas and institutions play in shaping actors' choices.

2 Bilateralism, Multilateralism, and the Making of an Alliance Consensus
chapter abstract

Chapter 2 recounts the origins of bilateralism in Asia and the legitimization of the US-led hub-and-spokes system among Asian elites during the Cold War. It also outlines the rise of ASEAN in the 1960s. Exploring postwar US alliances forged with the Philippines, Japan, South Korea, Australia, and Thailand, I demonstrate how material threats, institutions, and ideas interact to produce an alliance consensus among political elites in Asia. Despite periodic domestic opposition to US alliances, and the weakness of ASEAN, the hub-and-spokes system and ASEAN become entrenched over time.

This chapter demonstrates elements of change and continuity in Asia's regional architecture between the waning years of the Cold War and the Asian financial crisis. Despite the external shock of the Cold War, I argue that the path to change is best captured by endogenous processes of change where mechanisms of change and continuity intersect. The first part of the chapter chronicles the development of two multilateral institutions: the Asia-Pacific Economic Cooperation and the ASEAN Regional Forum. The second part demonstrates the continuity of bilateral alliances, focusing on the US-Japan and US-Philippines alliance.

Chapter 4 describes the rising phenomena of East Asian regionalism in the wake of the Asian financial crisis and demonstrates how debates between inclusive and exclusive variations of Asian regionalism played out in the development of the regional architecture. The chapter traces the establishment of the ASEAN Plus Three, the East Asia Summit, and the Six-Party Talks. Taken together, these three institutions signified greater political will behind regional multilateralism but also revealed the contentious nature of institution building. The discussion of multilateral developments is juxtaposed to an analysis of the US–South Korea and US-Thailand alliances, and their resilience in an era of greater multilateralism and expanding regionalism.

This chapter demonstrates how the complex patchwork of overlapping institutions in Asia is largely a product of historical institutional processes. Between bilateralism and multilateralism, a variety of mini-laterals, preferential trade agreements, and track II dialogues have grown to become an important part of the institutional landscape. Policy makers turned to these additional informal outlets to advance regional economic and security goals. The chapter describes US alliance relationships with Australia and the Philippines during the period of the US pivot to Asia, as well as the growth of new security partnerships with Singapore and Vietnam. It also explores trilateral relations and the rise of multilateral trade agreements, including the Trans-Pacific Partnership (TPP) and the Regional Comprehensive Economic Partnership (RCEP).

Chapter 6 explores developments in Asia's regional architecture under the Trump government and the rising influence of China under Xi Jinping. The chapter draws explicit connections between Asia's current regional architecture and the future of Asian order. It makes the case that institutions in Asia, particularly US bilateral alliances, are more resilient than presumed. It then draws on the historical institutionalism and regime complexity literatures to describe how the complex patchwork both complicates and advances institutional cooperation. The chapter concludes by offering a more optimistic outlook regarding the complex patchwork and its potential for improving regional governance.

7 Conclusion: Theory, Policy, and the Relevance of Historical Institutionalism and Asia
chapter abstract

Chapter 7 recaps the book's finding that processes of continuity and change have occurred simultaneously, transforming an under-institutionalized region into a complex patchwork of overlapping institutions. The chapter then draws lessons from historical institutionalism for international relations theory and its significance for Asia policy and strategy. The book concludes with recommendations for US policy makers given rising tensions in US-Sino relations and potential institutional competition between Beijing and Washington. In particular, it advocates policy makers to adopt a zero-sum framework and continue building and supporting the regional architecture in ways which reinforce, but also look beyond its bilateral alliances.