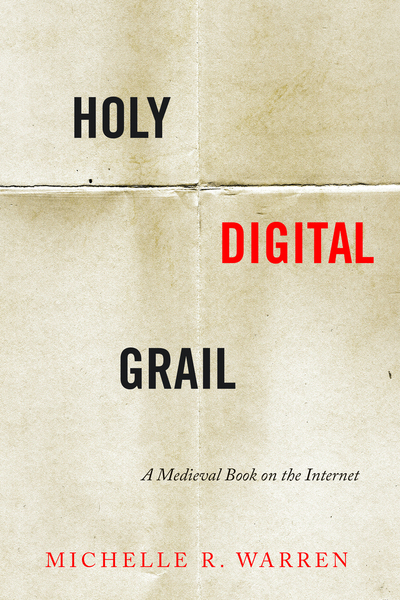 In the twenty-first century, technology platforms have become the coauthors of medieval literature. To explain how, this introductory chapter combines histories of computing, books, and libraries. The first section, "Computing with Medieval Metaphors," shows how popular ideas about the Holy Grail, King Arthur, and the Middle Ages contribute to a "tech medievalism" that distracts from the complexity of technology. Second, "Medieval Manuscripts with Digital Infrastructure" uses the famous Archimedes Palimpsest to illustrate how the internet has changed the nature of medieval books. Finally, "Six Arthurian Stories about One Book" explains how each chapter mobilizes digital infrastructure to reframe literary history. The catalyst is a unique copy of an English Arthurian romance—Cambridge, Corpus Christ College, MS 80. Three chapters begin with MS 80 in medieval England and end in the digital present; three begin with MS 80 in modern England and encompass global book collecting and publishing.

Translation is among the oldest preservation technologies and essential to modern access to medieval literature. MS 80's text is a translation that includes stories of translation and has itself been translated. It thus offers important lessons for the politics of preservation. Translated from French to English by Henry Lovelich in fifteenth-century London, MS 80 brought stories of Britain's Christian origins and King Arthur's reign to new audiences. The first section of this chapter, "French Books for England," shows how the deluxe paper manuscript translates the prestige of illustrated parchment. The second section, "English Style for Merchants," addresses Lovelich's craft as an author-translator. Finally, "Dutch Grail for Machines," turns to a twenty-first-century translation of Lovelich's text, published in a blog series about the Holy Grail. These born-digital documents bring Lovelich's translation into dialogue with tech medievalism, machine translation, and information security.

Social context can explain what books mean to people. Access to context, though, is mediated by data curation. MS 80 illustrates poignantly the relationship between research indexes and the histories they index. MS 80 is associated with a London community—the Skinners' Guild—that invested in public performances and textual patronage. The first section of this chapter, "Skinners' Guild and London Society," describes the guild's history, fur's social roles, and how Lovelich's text alludes to communal performance. The second section, "Corporate Religion and the Grail," relates MS 80's Christian themes to the guild's religious performances. Finally, "Civic Lessons and King Arthur" addresses chivalry as a model for good governance—a model followed into the seventeenth century, when Lovelich's patron, Henry Barton (d. 1435), was named in a public performance for a new mayor. This pageant became part of MS 80's context through the accidents of digital data curation.

Marks in and around books—from notes to annotations to smudges—produce their meaning. With MS 80, these marks span centuries, from papermaking to the internet. The first section of this chapter, "Making a Merchants' Book," uses a reader's annotation to assess the patronage relationship between Henry Lovelich and Henry Barton (d. 1435); scribal marks document other aspects of the book's production. Next, "Using Arthurian Narrative" shows how readers, including John Cok (d. 1468) and Archbishop Matthew Parker (d. 1575), drew attention to Christian history and Arthurian genealogies. Finally, in "Networking the Manuscript," annotations document how MS 80 was collected, catalogued, and edited—including its appearance on Parker Library on the Web. Digital codes extend the functions of handwriting on paper while also creating entirely new types of books.

Library catalogues define the nature of the books they describe; they also write literary history. As part of Parker Library, MS 80 has been catalogued multiple times, with a succession of shelf marks and variable interpretations of its genre. The first section of this chapter, "History under the Shelf," shows how Archbishop Matthew Parker (d. 1575) and subsequent Protestant cataloguers emphasized the book's historical value to the English nation. "Romance in the Index" addresses the text's reinterpretation in the eighteenth and nineteenth centuries in relation to romantic medievalism. Finally, "Library on the Internet" analyzes how Parker Library on the Web recycled older classifications while also opening new perspectives on literary history. Over time, catalogues reproduce books as projections that become as real as the books on the shelves.

Modern editions of medieval literature create literary history through both their texts (philology) and their formats (codicology). The first section of this chapter, "Romance in Literary History," unravels how MS 80 came into print in 1861 as a nationalist expression of romantic medievalism, only to be denigrated in the twentieth century as "bad poetry." The second section, "Text on Platforms," analyzes how the financial models initiated by MS 80's editor, Frederick J. Furnivall, have shaped Lovelich's text in both print and digital formats: the Roxburghe Club, the Early English Text Society, the Oxford English Dictionary, and Literature Online by ProQuest. Finally, "Codex on Demand" looks at this same history through formats: deluxe hardback, cheap paperback, PDF, web interface, and print-on-demand codex. With mass digitization, "platform philology" and "platform codicology" combine to bring old ideas about romance back into the marketplace.

Copies of manuscripts create new literary canons by shifting the conditions of access to texts and books. As part of Parker Library, MS 80 has been reproduced several times. The first section of this chapter, "Rebinding British Heritage," uncovers the geopolitical significance of the Pilgrim Trust, which paid for MS 80's new binding in 1956. Second, "Microfilming National Documents" traces similar dynamics around the mass microfilming of medieval manuscripts with support from American organizations: the Library of Congress, Modern Language Association, American Council of Learned Societies, and Rockefeller Foundation. Finally, "Digitizing Global Assets" shows how Parker Library on the Web extends these influences onto the internet through new patronage arrangements with the Andrew W. Mellon Foundation and Stanford University. Each reproduction has restructured the idea of the "book" within the legacies of colonial capitalism. These same legacies are sustaining digital infrastructure with implications far beyond medieval studies.

The conclusion revisits the Grail metaphor and the romance genre to reinforce the lessons that can be drawn from MS 80's passage from medieval London to the internet—lessons about books, literature, preservation, aesthetics, interfaces, and the politics of the knowledge economy.