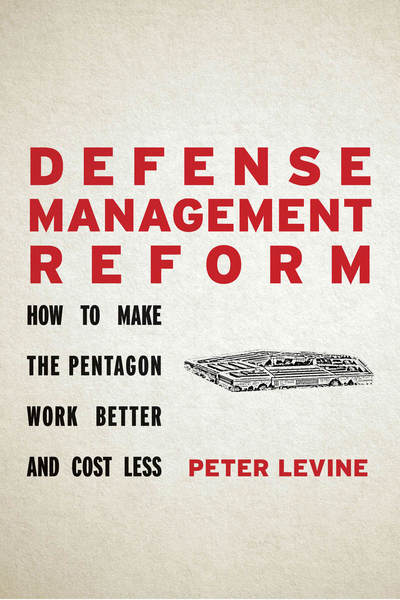 Rarely a month goes by without a stream of articles detailing waste and mismanagement in the Pentagon. On December 1, 2018, a New York Times editorial proclaimed that “The Pentagon Doesn’t Know Where Its Money Goes.” Later that month, an op-ed piece in the same newspaper stated that “These Toilet Seat Lids Aren’t Gold-Plated, but They Cost $14,000,” while a commentary published by the Heritage Foundation brashly asserted, “Pentagon Waste Shouldn’t Stop Congress from Fully Equipping the Military.”

Peter Levine’s book explains in clear detail why the Pentagon has failed a long-required audit and why its acquisition system continues to produce examples of overspending, along with other management failures. That much has been done before. Peter’s book, however, looks not just at Pentagon failures, but also at real-world examples of reforms that have worked. He builds on the DOD’s mixed history of failure and success to describe the path that needs to be followed to achieve lasting management reforms. By showing not only where and why Pentagon management has fallen short, but where it can succeed, Peter has delivered an optimistic and realistic way forward.

Throughout the book and its case studies, Peter combines careful detailed analysis with common sense and an awareness of human aspects of reform efforts in the legislative and executive branches. For instance, rather than beating up on a Pentagon bureaucracy stereotypically accused of defending its own turf, Peter sees a natural testing of ideas by people of good will who offer important institutional perspectives. A process that allows those views and experiences to be voiced, he concludes, provides greater legitimacy and, if it is well organized, can promote more successful and lasting reform.

Driving the story of this book is an appreciation of the Pentagon’s vital purpose of helping to defend our nation and the importance of sound management for the Pentagon’s $700 billion budget and trillions of dollars of assets. When that management falls short, the result is not only a waste of the taxpayers’ dollars, but a trail of negative stories that can undermine our nation’s security and our people’s belief in a democratic government.

Peter Levine’s years on the front lines of government management make him the ideal person to tell this story. Peter served on my staff for twenty-eight years—first at the Senate Governmental Affairs Committee and then at the Senate Armed Services Committee, where he became general counsel and then staff director. In this time, Peter saw reforms that successfully leapt legislative hurdles, and others that went nowhere. He saw that for legislated reform to be effective, it must be the product of a deliberative process and a collaborative development of solutions, and—equally importantly—it must be received, understood, and executed in the federal agencies. Peter’s knowledge and commitment to defense management issues was so deep and objective that his counsel was sought out by members and staff of both parties.

After leaving my staff, Peter was appointed as the Defense Department’s deputy chief management officer (DCMO)—the senior DOD official in charge of management reform. He did so well in that job that he was soon asked to step into the vacant position of under secretary of defense for personnel and readiness, with policy responsibility for a military and civilian workforce of more than 2.2 million. This experience served to deepen his understanding of the obstacles to reform and the paths to success.

The result is a book that is the product of a unique combination of legislative and executive branch background. Our country is the beneficiary of Peter Levine’s public service and will benefit from the practical wisdom he gained, as chronicled in this book. It will serve for years to come as a primer both for those who seek to understand how the Department of Defense works, and for those who accept management responsibility and strive to help the department to effectively fulfill its vital role.