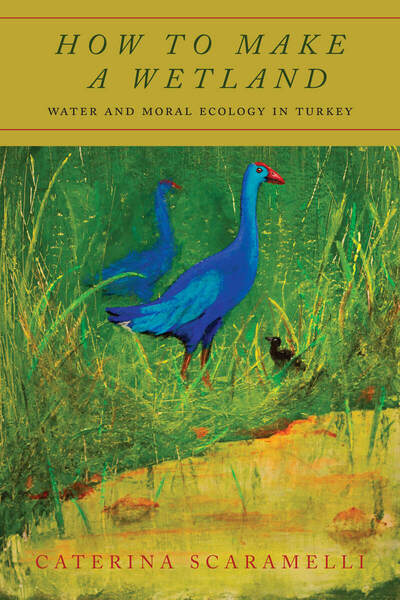 This chapter locates the processes that have produced Turkish wetlands (sulak alanlar) as contested sites of conservation, drainage, and subjects of moral claims. It foregrounds the theoretical contours of the book—connecting the situated moral stakes of Turkish environmental transformations to questionings of infrastructure, development, and expertise. In Turkey, wetlands are inseparable from the work and politics of infrastructure. Wetland conservation has reinvented and repurposed older tools of swamp drainage to legitimize new forms of technocratic environmental politics. Wetlands are environments requiring constant care, variedly directed at maintaining wetland ecologies, cultivating them, rewilding, rendering them productive, studying, transforming, or governing them. This chapter also introduces the main sites of the book, the Gediz and Kızılırmak Deltas, and the farmers, scientists, and fishermen that populate them.

1 The Wetlands of Turkey
chapter abstract

While Ottoman and Turkish officials recast marshes and swamps as unhealthy environments to be reclaimed for agricultural and urban development, since the early twentieth century birders and scientists have advanced an ethos of wetland conservation. These efforts produced new legal structures and scientific concepts of the wetland in a mushrooming international network of conservation and research institutions. In the mid-twentieth century, Turkish scientists became stewards of wetland protection in the country as the concept of the wetland came to encompass environmental conservation beyond the preservation of waterbird habitats. This convergence resulted in new categories of wetland governance and resources that never fully supplanted but existed alongside visions of swamp reclamation. It also generated new environmental forms, whereby wetland preserves would coexist with large-scale agricultural reclamation projects.

Following scientists at work in the Gediz Delta through muddy estuaries, at field stations, in university offices, at conferences, and in their homes, this chapter frames how competing ideas of wetland habitats and livelihood are produced, contested, and remodeled through social and political processes. Everyday contestations over wetland conservation are not simply about the ethical values of preservation, development, and livelihood but also implicate material remakings of land, water, and infrastructure. This chapter tracks three ways in which wetland experts manage materiality: building wildlife habitats for select endangered species of animals and plants, harnessing the ecosystem functions of the wetland, and inviting upper- and middle-class access to wetland ecologies as sites of leisure, recreation, and learning—at the exclusion of rural and working-class livelihoods. In the process, different communities of wetland experts have worked to naturalize particular material forms of the wetland.

This chapter probes articulations of the moral value on deltaic infrastructures and ecologies, ones that posit them as inseparable. The analytics of moral ecology illuminate the urgency through which Turkish residents have tackled questions of environmental and infrastructural change. Moral understandings of ecology in the delta are not necessarily emancipatory, inclusive, progressive, or sustainable. They are nested within capitalist processes, histories of land expropriation, class and gender hierarchies, and exclusionary ethnonationalism. From fishermen's assessment of new development at the edge of a conservation area, to struggles for access to fisheries, a symbolic funeral for the flamingoes' death by infrastructure, and mobilizations against a planned bridge, this chapter locates how different social groups in Izmir reimagine their own ecological entanglements. A moral ecology is both an impulse for action and the terms in which claims are made. Moral ecologies are also couched in perceived hierarchies of scientific knowledge.

4 Caring for the Delta
chapter abstract

This chapter analyzes the material and semiotic transformation of the Kızılırmak Delta's fields, marshes, swamps, meadows, canals, lakes, and reed beds into a valuable, yet endangered, ecology. Environmental conservationists have variously enrolled, romanticized, and excluded farmers in their visions of the wetland and in their everyday practices. While seeking to involve farmers as drivers of biodiversity and repositories of traditional knowledge, environmental conservationists have elided the history of settlement in the delta, as well as contemporary farmers' perspectives and their aspirations for work, class mobility, leisure, and sociality. The chapter attends closely to the care practices of wetland advocates. Focusing on the care of the wetland to emphasize the daily practices, ethics, and relationships that inform the work of scientists, the chapter foregrounds the affective commitment that undergirds an "expert" concern for degrading environments.

This chapter explores the extension of everyday environmental politics to communities of nonhuman animals. For farmers in the Kızılırmak Delta, wild and domestic animals are at once political subjects, agents of ecological change and place making, and companions of everyday life and work. Everyday encounters with animals reflect experiences of power dynamics and ecological uncertainty and also become proxies for environmental politics. Nonhuman animals are central to both acts of resistance and compliance with regimes of environmental governance in the delta's agricultural fields and wetlands. Animal practices—and the stories that farmers and scientists tell about them—disrupt dominant ideologies of wetlands. In their conversations about delta animals as well as through their embodied participation in material practices of animal livelihoods, delta farmers, scientists, and activists claim and debate desirable forms of wetland livelihoods and politics.

This chapter returns to the notion of moral ecology as an analytic for environmental precarity in the twenty-first century in Turkey and beyond. Wetlands are neither innate nor unchanging. The dynamic ecologies of the wetland's shallow water remain at the center of humans', plants', and animals' lived realities of climate change, toxic pollution, and industrial models of agricultural production. Wetlands provide places of hope as people learn to live with environmental uncertainty. Working through the contested moral ecologies of the Turkish wetland helps foreground the differential stakes wrought of broader changing theaters of life, environment, and livelihood. The predicaments of the contemporary Turkish wetlands remain inextricable from their contested politics of nature. Yet they have not merely reflected or absorbed broader political shifts. The chapter concludes with reflections on the political ecology of wetland materiality as emergent in environmental struggles, debates, and imaginations.