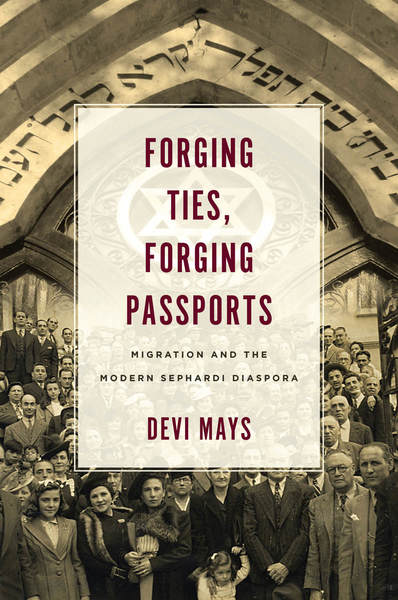 The introduction lays out the book's methodological focus on individuals as they moved through time and place, examining how they adapted to changing migratory regimes in the transition from empires to nation-states. It defines what the book means by key terms like hypermobility, diaspora, and Sephardi Jews. It argues for the importance of analyzing specific networks that Ladino-speaking migrants formed through marriage, commerce, patronage, kin, the press, and religious figures. These networks proved crucial for understanding experiences of migration as they relate to state-building practices. They were also crucial for forming a modern Sephardi diaspora, understood in this book as processual and formed through networks of communication and contact.

The first chapter argues that Ottoman Sephardi migrants in Mexico were caught up in a process of defining citizenship and national belonging. They resisted classification as either Ottoman expatriates or unequivocal Mexicans simply by maintaining a diasporic consciousness and connectedness with Sephardim in the Ottoman homeland, France, Cuba, and the United States. Drawing on these transnational financial and familial networks, Sephardi migrants were able to acquire and sell wares from the United States and Europe (specifically France). In doing so, they capitalized on Mexican Francophilia and their ambiguous national backgrounds to market themselves and their products as "desirable."

Chapter 2 explores the period of prolonged war that accompanied the end of the Ottoman Empire and the Mexican Revolution. This chapter argues that in spite of Ottoman and Jewish communal leaders' demands that Sephardi subjects actively manifest their loyalty to the Ottoman war effort by serving in the armed forces, many Sephardim migrated. Some desired to avoid military service altogether, while others were eager to serve in the armed forces of the new states in which they resided and with which they identified. Mexico-based émigrés subverted Ottoman and American attempts to regulate them by acquiring or performing alternative nationalities. This allowed them to bypass American restrictions against the entrance and commercial transactions of enemy nationals, facilitating their continued mobility in the face of the increasing surveillance of movement that accompanied World War I.

The exploration of how migrants and others made sense of the upheaval, chaos, and possibility that came in the wake of World War I and the Mexican Revolution undergirds the third chapter. Migrants and those who remained navigated transforming and unfamiliar layers of bureaucracy and authority as borders and powers changed around them. This required imagining and implementing new social and communal realities in light of divergent futures; it required fitting oneself, one's family, and one's community into what seemed the most plausible future at any given point in an era of many possible futures. In this period of chaos and possibility, borders were redrawn and new authorities imposed themselves; critically, too, meanings ascribed to nationality, class, race, and gender were in flux. Countless Sephardi individuals made calculated choices based on their reading of the present in light of what they believed the future likely to hold.

4 "They Are Entirely Equal to the Spanish"
chapter abstract

A world that had been set along new borders required nations to be built to fit. In the face of the United States' implementation of quotas on immigration, increasing numbers of Sephardim migrated to Mexico. Mexico was receptive to Sephardi Jewish migrants, who were perceived, as a result of their distant Iberian origins, to be "equally Spanish and Jewish" and assimilable. Sephardi migrants sustained active commercial, familial, and even transnational policing networks between the United States, Cuba, Mexico, and Turkey facilitating movement and acclimation in these states. Many migrated as a result of Turkish policies designed to encourage emigration and the religious and ethnic homogenization of the newly formed Turkish Republic. The same Iberian linguistic and cultural heritage that in Mexico forged a bond perceived by Mexican officials and Sephardi migrants to mark Sephardi Jews as potentially assimilable was held in Turkey to show proof of the lack of Sephardi integration.

As the 1920s moved into the 1930s, the deportation, denaturalization, and prohibition of certain types of migrants became increasingly common strategies states used to enforce their sovereignty and their national designs. Chapter 5 examines how Sephardi migrants adapted when the goods they dealt in, and they themselves, became undesirable and sometimes illegal. It explores Turkish policies of denaturalizing Sephardi and other émigrés and Mexican efforts to expel "pernicious" migrants as popular opinion and nationalist groups increasingly turned against migrants. It explores how Sephardi migrants mobilized extensive transnational networks of patronage, family, and commerce that traversed the Mediterranean and Atlantic to circumvent prohibitions on trade and migration.

6 Forge Your Own Passport
chapter abstract

The book's final chapter follows the life and career of Mauricio Fresco, the youngest son of the most prominent Constantinopolitan Ladino-language newspaper editor, as he transformed himself from a Turkish Jewish migrant in Mexico to a prominent Mexican diplomat stationed first in Shanghai in the 1930s and later in Bordeaux, Lisbon, and Nazi-occupied Paris. It traces the narrative of transnational Sephardi networks in the face of state control on mobility into a period in which those networks began to break down just as they were becoming most crucial. It explores how Fresco drew on his own falsified paperwork that showed he was Mexican, together with transnational Sephardi networks, to craft a career of diplomatic service to and advocacy of Mexico. He later used his expertise and experience to critique the ideas of citizenship, nationalities, passports, and races.

In order to highlight the precarity of migrant experiences and the vagaries of archival research, the conclusion focuses on the life history of one particular migrant who, employing the same strategies that many others used to great effect, nevertheless failed. It reiterates the book's larger arguments about the imbricated nature of state-building and migration control, and how migrants adapted to and challenged these controls by drawing on networks of communication that formed a modern Sephardi diaspora. It raises larger questions for future exploration of the nature and limits of citizenship and prompts a more capacious understanding of Judaism and Jewish ritual actions.