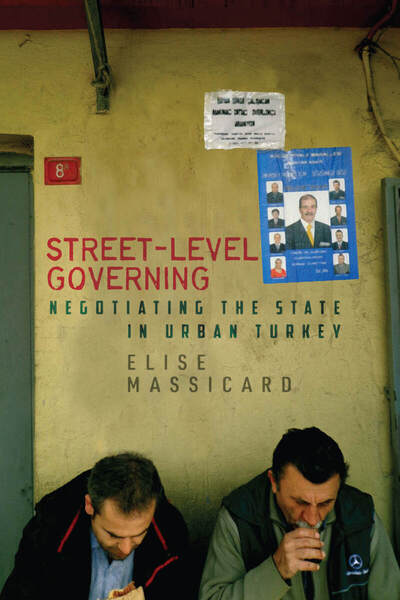 This chapter analyzes the formation of the muhtarlık institution in the 1830s, and its later developments. It shows that it is not a classic administration, but a hybrid institution that does not fit the dominant interpretation of Ottoman and Turkish history, viewed in terms of bureaucratization. Instead, the muhtarlık was framed in the Ottoman imperial fabric as an institutionalized intermediary among others. In the new politico-administrative order of the republic, the muhtarlık became a hybrid, halfway between local state administration and local government. This institution is poor and weak. It has no legal personality or budget. It is characterized by the voluntarily partial sway state institutions exert over it. It maintains its office holders in other spheres of activity and interest, be they social or professional. Therefore, most muhtars have other sources of income, and remain highly dependent on the residents they are supposed to administer.

2 How the Muhtarlık Fuels the Production of Notables
chapter abstract

The pronounced social anchoring of the muhtarlık has an impact on the social profiles of muhtars. This chapter provides a sociological overview of muhtars in terms of age, education, profession, and social trajectories. Muhtars often come from well-off families who have long lived in the area and who often have engaged in various forms of activities—social rather than political. For muhtars to have formal relationships with political parties has been prohibited. What determines their ability to be elected is their ability to arouse large localized coalitions. This embeds muhtars in their localities by various ties which, in turn, have consequences in the way they act once in office. The resilience of this figure of indirect government despite the institutional upheavals the country has been through means that intermediation needs to be considered an integral part of the Turkish state's functioning, to this day.

How have the recent standardizing reforms of Turkish administration, especially the arrival of impersonal IT administrative mechanisms, impacted the muhtars' role? From the perspective of rationalization and modernization, they ought to have led to their demise. They have indeed led to the muhtars' prerogatives being reduced. Yet, rather than disappearing, their role has been reconfigured. This chapter analyzes that process on the basis of the changing scheme of social welfare for the poor. Muhtars had for a long time assisted the state in selecting beneficiaries of assistance. Since the 2000s, new databases have connected citizens' personal data, and specific criteria are supposed to determine the citizen's rights to benefit from social assistance. These processes are only partially rationalized, however, and therefore remain uncertain. Muhtars act as intermediaries and channels of redress; thus, social assistance is governed in hybrid ways.

The coexistence of apparently opposed modes of government raises the question of what is specific to this institution in an otherwise bureaucratized context. The muhtar's spatial proximity to, and engagement in, neighborhood relationships generates proximity and familiarity. The muhtarlık is an accessible institution where everyday sociality is at play and one can easily ask for personalized advice. Consequently, residents present muhtars with all sorts of requests that exceed the official definition of their function. Muhtars find themselves caught between institutional injunctions and these demands, to which they are sensitive since they depend on their electorate. Muhtars mostly try to combine diverging role ascriptions by performing as mediators. But the public image they give is primarily one of being helpful and prompt to serve their inhabitants, thereby producing the image of a negotiable state.

What are the outcomes, in terms of government, of this institution with ambivalent ties to the state order? They are ambivalent and contrasting. The muhtars appear as amicable agents of the state who make the administrative practices more legible to the citizens by employing their cultural know-how. In many ways, they facilitate the citizens' relationship to administration. This is particularly the case for the social groups most distant from the administrative order: those who prefer oral to written communication, or who feel administratively incompetent (women, elderly people, internal migrants, or disadvantaged groups). On the other hand, the muhtars help in accommodating the institutional order. By offering the possibility of individualized treatment and accompanying arrangements, the muhtarlık embodies the possibility of accommodating or bypassing the official order, thus feeding incessant suspicions of favoritism. Their effect is to strip the state of its neutrality.

A further ambivalent dimension to the institution's political effects relates to the fact that muhtars, with their extensive autonomy, inhabit their role in widely differing ways. At times they act as institutional relays, at others as a channel for residents' demands. Their missions—some of which they don't have the means to fulfill—can sometimes put them at risk, and in some situations they have to deal with conflicts of allegiance. While some muhtars support residents' claims at times against official policy, others act mainly as the representative of state institutions. Contrary to the common assumption that gatekeepers try to distribute as many resources as possible, some muhtars prefer avoiding the distributive dimension of their role. The way in which they embody the role is also linked to the neighborhood context, as well as to their very different personal trajectories and resources.

The ways in which muhtars assume their role cannot be dissociated from their relationship with public institutions—mainly municipalities and subgovernorships. To be able to deliver, muhtars are increasingly dependent on external resources, and therefore on the institutions that provide resources and which in turn try to bind them more closely. Muhtars accommodate to their institutional environment, but also build up and modulate relationships therein. There is also an increasing partisan political dimension to their relationship with institutions. Because affiliation with parties is prohibited for muhtars, their party politics is unofficial. Despite the nonpartisanism they mostly display, they have long been inserted into political competition as electoral agents and presumed opinion leaders. However, the growing hegemony of the AKP at all levels of Turkish politics in the last decade or so has increased the partisan political dimension of muhtars' activity, and has changed their room for maneuvering.

The authorities have recently become more directly involved with the muhtarlık, thereby diminishing its autonomy. More voluntarist patterns of municipalism have reinvested local spaces, both marginalizing the muhtars and trying to integrate them in overarching hierarchies. More proactive urban planning policies have led to an increased number of conflicts involving muhtars. At times this reoliticization makes it unavoidable for muhtars to take sides. In some cases it has also led to an increase in more activist profiles and a decrease in more "notable" types of muhtars—indeed, to the realignment of these formerly semiautonomous local figures. Since 2014, the executive has sought to bind the muhtarlık ever more closely to it. The comparative autonomy from institutional and partisan political considerations that long characterized this micro level of government might well be coming to an end, suggesting a crucial transformation in patterns of government and state-society relations in Turkey.

The muhtarlık shows what an important role intermediation has played in the institutional functioning of the Turkish state. These intermediaries are not parasitical figures, nor are they signs of some "crisis" of state. This runs counter to dominant visions of Turkish history in terms of modernization. Intermediaries and rationalized administration work simultaneously; the muhtarlık is one component in an ever more bureaucratized landscape. What political effects does this produce? By making themselves available and framing their action in terms of doing favors, muhtars help sustain the idea of a state that is accessible through intercession. This leads to the fragmenting of partial spheres of regulation on social and geographical bases, but also—perhaps increasingly—on political bases. How does this fragmentation tie in with the question of domination? Power relations are played out following specific rationales that consist of more than straightforward state domination or social resistance.