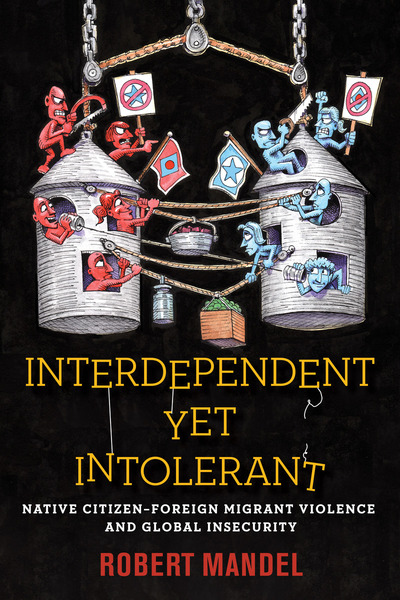 WE LIVE IN A WORLD breeding contradictory impulses endangering global peace and stability. On the one hand, international communication and transportation have led us to become more aware of and interdependent with each other than ever before, providing many with unprecedented opportunities to interact positively with diverse people, goods, services, and ideas. On the other hand, rapid unpredictable changes in way of life linked to the influx of foreign people and ideas have often negatively induced discomfort, fear, anger, and intolerance. Living within such highly interconnected but yet divided multicultural settings—where internal and external frictions have become increasingly intertwined—can be deeply unsettling, with established patterns of behavior continuously subject to significant challenge. In many ways, the central global paradox has been, as nationalism expert Andreas Wimmer points out, that “inclusion according to the universal ideals of the Enlightenment was bound up with new forms of exclusion based on the principle of ethnicity and nationhood.”1 Despite growing interconnectedness, “the need for separation, for distinguishing among ‘us,’ ‘we,’ and ‘the others,’” has seemed to intensify.2 The implications of such a volatile global setting include that no single party—individual, group, or state—can rest complacent and confident that it can totally successfully determine its own fate, and, when failure does occur, it may be more attractive to demonize outsiders as scapegoats than to take responsibility for disappointments encountered.

A fundamental expectation-reality gap characterizes this unstable global predicament, and it is perhaps surprising to some that the contradictory impulses have not yet been reconciled. Regarding this dysfunctional gap, insufficient attention has been devoted to broadly analyzing how native-foreigner tensions can be emerging within a world where so many espouse a liberal international order, with a particularly glaring omission being examination of when, how, and why the enlightened cooperative values vocalized by much of the global community encounter societal rejection so spirited that violence ensues.

From a security viewpoint, this book conceptually and empirically explores the circumstances when intolerance is most likely to escalate between native citizens and foreign migrants, and when such intolerance is likely to become sufficiently extreme as to lead to violence and global insecurity. Based on an analysis of twelve twenty-first-century global case studies of intrasocietal violence between native citizens and foreign migrants, this study concludes that—rather than breeding mutual tolerance through increased contact, homogenized tastes, and technology, and enlightened values—interdependence and globalization operating within today’s liberal international order counterintuitively can help to stimulate boomerang effects in the opposite direction. The multifaceted roots of ensuing violence include (1) foreign immigration pressures overwhelming host states’ willingness to take people in; (2) bottom-up cultural and economic frustrations; (3) a populist, nationalist, tribalist, and xenophobic backlash by those wanting to preserve the status quo in the face of external pressure to change; and (4) political leaders and media outlets amplifying existing discontents and divisive enemy images. In accordance with case study insights, this study suggests detailed policy recommendations about how to manage intrasocietal violence between natives and foreigners in an interdependent world. This volume addresses the responsibility and means for fixing these problems; debunks popular myths surrounding violence perpetrators, including that they are all far-right native citizens motivated by a single form of intolerance; and highlights the dangers of fortress mentalities, societal polarization, security outsourcing, and tolerance hypocrisy. Throughout, this study explicitly attempts to remain impartial in exploring native-foreigner relations, resisting the temptation to engage in emotional passionate support of one side or the other. Finally, this investigation concludes by urging societies to rethink predominant notions of national identity and control.

Fears of the unexpected, unfamiliar, and unknown have ancient roots, but many observers expected them to fade in the modern high-contact setting. Instead, such apprehensions have flourished in recent years, leading to more visible and more deadly cross-group intolerance within societies. Past optimistic hope has frequently given way to present pessimistic dread, reflecting a sometimes desperate desire to protect natives’ status quo or to protect foreigners’ basic rights. This distressing pattern associates with increasingly highly skewed asymmetrical interdependence relationships; growing internal and external economic inequality between haves and have-nots; loss in local distinctive identity and control; and growing misunderstandings between natives and foreigners. The outcome has encompassed escalating pressures to change border access to maintain homeland security.

Friction that may sometimes become violent frequently occurs between pressures of integration and fragmentation, unifying and dividing the fabric of the international community. The net effect can be profound insecurity:

Many people feel that everything familiar to them is being threatened, that they are being confronted with decisions, cultural artifacts and the presence among them of persons, all coming from outside their familiar and trusted sphere. They seek security by trying to exclude the forces and people that are doing this to them. Most affected are those whose own working lives give them little control in any case, and who are accustomed to the security that comes from the enforcement of rules that exclude troubling diversity.3

The pervasive sense of insecurity has led many people to question the value of mutual acceptance, often replaced by a desire for alien exclusion. Both national governments and international institutions have encountered difficulties in attempting to manage this kind of volatile predicament. When the insecure mass public recognizes national governments’ inability to restore among those living within their national borders a firm sense of societal safety, distrust of state political institutions may escalate, leading in many cases to citizens resorting to private security to provide their protection and even on occasion to using coercion to preserve local identities and to safeguard cherished belief systems.

This topic necessitates exploration of several fundamental security questions. Why do cross-country contact, interdependence, and globalization not foster consistently more global understanding and acceptance? What explains the widespread existence of cross-national fear and hatred given vast improvement in communication and transportation technologies? How can primordial populist, nativist, tribalist, and xenophobic sentiments thrive in a modern interconnected world? In what circumstances does the greatest international vulnerability to such fear and hatred and resulting coercive disruptions exist? When are an inward focus among native-born citizens on protecting their own lifestyle and among foreign migrant communities on protecting their own rights most dangerous to individual, state, and global security? When are related intra-state cultural and economic intolerance-oriented frictions most likely to translate into interstate tensions? Why would politicians and media outlets choose to amplify mass public intolerance? In a world full of diverse and distinctive firmly held beliefs, loyalties, and practices, finding better ways to answer and address these complex security questions seems vital for global peace and stability.

This book covers human, state, and global security causes, consequences, and cures of native-foreigner violence because intolerance tensions fundamentally affect people’s sense of safety from harm, given that both native citizens and foreign migrants perceive that such tensions directly affect their ability to survive and thrive. The focus here is on the security implications of intolerance—when it turns violent—for that is when cross-group prejudice seems most dangerous. This investigation’s geographical scope is explicitly global, encompassing native-foreigner interactions not confined to one country or one region, because native-foreigner intolerance has differing manifestations in differing parts of the world. Moreover, such frictions’ security impacts are not locationally insular—just confined to domestic society—for they tend to seep over national and regional borders because of cross-boundary ties among both perpetrators and victims. This study covers exclusively twenty-first-century incidents, for that is when native-foreigner intolerance under a liberal international order seems to have hit a critical boiling point. The emphasis here is only on intolerance between native citizens and foreign migrants—not on human rights violations, white nationalism/supremacy movements, racist bigotry, religious shunning, or homophobia—because pernicious native-foreigner confrontations appear to have the greatest potential to significantly heighten global rather than just local insecurity.

The issues addressed here associate with several wider global security concerns. These include (1) the emergence of domestic and transnational challenges to the global status quo, despite the presumed durability of the liberal international order, the state system, and national sovereignty; (2) the intensifying Western/non-Western and Global North/Global South value divides, despite assumptions that the growth and spread of international interaction stimulate global understanding; (3) the rising attractiveness of populist political leaders playing to a mass public audience frustrated by foreign influences and loss of local identity, despite the presumed internationalist thinking emanating from cross-state interdependence and globalization; (4) the increasing state tendency to restrict foreign immigration, despite the premise that openness to foreign goods and services should stimulate receptivity to foreign ideas and foreign labor; (5) the growing mass public cynicism about national governments’ ability to protect the safety of those living within a country’s borders and their way of life, despite the presumption that the spread of democracy should stimulate more effective ways to track and fulfill these citizens’ needs; and (6) the persistence of global anarchy incorporating a resurgence of “might makes right” behavior by nonstate groups, despite the assumption that the growth and spread of enlightened international norms should stimulate global civility.