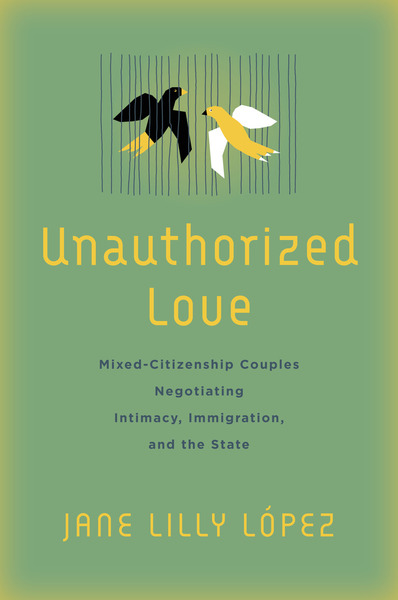 In 2009, Camille, Juliette, and I fell in love with non-US citizens. Camille and Giovanni, whose parents brought him to the United States from Guatemala when he was just six years old, felt a spark as soon as they met. Although Giovanni’s parents and siblings had been able to obtain a legal immigration status, he was too old to receive permanent residency automatically with his parents and still had no authorization to live in the US when he and Camille fell in love. Camille was not too worried about it; she figured that once they married, he would automatically qualify for citizenship through her. Tenoch, Juliette’s partner, came into the US without authorization in his early twenties, shortly after his mother died. In Mexico, he had been studying at university to be a chemist. In the US, he began working in construction to help support his father and eleven siblings back at home. My boyfriend, Ramón, still lived in his Mexican hometown conveniently situated on the border with California. He had a tourist visa and could travel back and forth regularly to the US as needed, although Mexico remained his country of residence.

The first, and only, time all six of us were together was at Juliette and Tenoch’s wedding in July 2010. Camille and Giovanni, newlyweds themselves, danced the night away. As Camille swayed and turned across the dance floor, I could see hints of her twenty-week “baby bump” through her long, flowing dress. Juliette and Tenoch glowed, with huge smiles beaming from their faces all night long. The warm evening was filled with laughter, song, and possibility. We all felt like our lives were just beginning as fate beckoned us toward a future full of promise.

By the time I began my doctoral program in 2011, Camille and Juliette were both married with babies, and I was newly engaged. In some ways, we all felt like we were heading down the same, happy path. But our partners’ different legal statuses were already pushing our lives in divergent directions. Police had arrested Giovanni in late 2010 on a warrant after pulling him over for speeding. (He had missed a mandated court appearance, which triggered the warrant for his arrest.) He spent a year in jail and was slated for deportation as a result. Camille gave birth to their baby boy alone, and now she was fighting off depression and caring for her newborn while exhausting every possible lead that could help cancel or delay Giovanni’s deportation.

Juliette experienced stress and anxiety as she adjusted to her new life “in the shadows” as part of an unauthorized immigrant family living in the US. She had nightmares that police were pounding on their door, calling out Tenoch’s name, waiting to arrest and deport him. Most days felt “normal”—as normal as life with a newborn can feel—but Juliette also carried with her a new, never-ending worry that quietly gnawed at her peace of mind. Every day she wondered, Will today be the last day our family can be together?

And yet everything for Ramón and me seemed straightforward. We could marry when we wanted and live where we wanted (which, for the time being, would be in Mexico). We both traveled freely between the US and Mexico, building ties as a couple with family and friends in both countries. The world was as wide open as we wanted it to be, our opportunities seemed endless, and we felt uninhibited in charting our future together.

As I began my graduate studies, I sought answers to explain how Camille, Juliette, and I—all US citizens, all in love, all equally “deserving” of family success—could already be traveling along such varied trajectories because of our partners’ (non)immigrant statuses in the US. Our three stories, and our very different experiences within the US immigration and family reunification system, have grounded this research from the beginning, setting me on my path to understand why US immigration laws have made it relatively easy for some families, like mine, to succeed while making it nearly impossible for other families, like Camille’s and Juliette’s, to survive.1 This book is my attempt both to answer these questions and to bear witness to the consequences of US immigration policies on families, a record of our (un)authorized love.

1. Though admittedly infinitely less “easy” under the Trump administration.