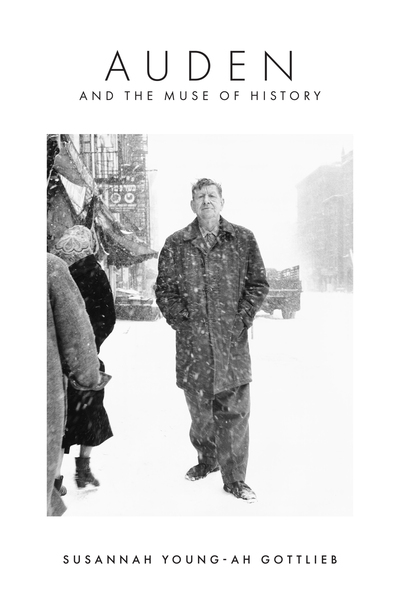 Auden and the Muse of History
Susannah Young-ah Gottlieb

The introduction locates the centrality of the problem of history in Auden's work and especially in his understanding of what poetry is for. After describing the range and structure of the study, which concentrates first on Auden's work around the time of the Second World War and then on the poems collected in the 1960 volume Homage to Clio, it presents the overall argument of each chapter and shows how Auden's capacious conception of history can be brought into a productive dialogue with the ideas of several prominent thinkers and scholars in the late twentieth and early twenty-first centuries. It closes with an analysis of Walcott's conception of the muse of history, which he developed through an intense dialogue with Auden's work.

The chapter begins with an analysis of a series of appropriations of Auden's poetry in 1990s popular culture, where it becomes a key element of pre-marital counseling. While examining the most consequential of these appropriations, Four Weddings and a Funeral, the chapter shows how the poem "Funeral Blues" played a small yet important role in the argument for marriage equality. The source of the attraction to Auden in the context of marital deliberations, as argued here, derives from his own complex relation to marriage, including his purely legal one (to Erika Mann), and his real, though unsanctioned one (to Chester Kallman). Through analyses of his epithalamia in the late 1930s and early 1940s, especially "In Sickness and in Health," the chapter shows how, for Auden, marriage is a paradigm of an affirmative history event, which is disentangled from natural cycles and socially imposed conventions.

Taking its point of departure from the fact that Auden and also Adorno and Horkheimer produced portraits of Voltaire around the same time, this chapter argues that Auden developed a version of critical theory that was in a certain sense more exacting than the one produced by the co-authors of Dialectic of Enlightenment. The figure of Voltaire that Adorno and Horkheimer construct can be seen as a narcissistic self-portrait in which the unity of "hard thinking" is presented as the only genuine good in an unjust world. While praising Voltaire in prose as a "great democrat," Auden's portrait of Voltaire emphasizes a social practice (his utopian community in Ferney), while at the same time, Auden's poem "Voltaire at Ferney" shows how his literary engagement is predicated on a radical split in the institution of poetry.

3 "Civilization Must Be Saved"
chapter abstract

Chapter 3 begins with an analysis of Auden's scathing review of Harold Laski's liberalism. Auden sought to develop an understanding of fascism that would not be grounded in a self-satisfied form of liberalism that fascism itself, he argues, takes to its limit. The chapter then examines three prose monologues from Auden's verse dramas, each of which was originally assigned to a figure playing a role opposite to that of the figure for whom the monologue was eventually completed. The first monologue is the sermon of a counter-revolutionary Vicar; the second is the soliloquy of Herod, who, as a rational bureaucrat in a colonial outpost, deliberates on mass murder to "save" civilization; the third is Caliban's address to the audience, which shows how the "gulf" between stage and performer is entangled in the division between the colonial subject and imperial agents.

This interlude is a concentrated analysis of "The Fall of Rome," in which the collapse of the Western Roman Empire is superimposed on the collapse of the British Empire. Comparing the structure, form, and themes of Auden's poem with the work of a broad spectrum of nineteenth- and twentieth-century European poets, from Baudelaire to T. S. Eliot, the analysis distinguishes Auden from his modernist predecessors in that he does none of following: lament the decline of the West, engage in fantasies of finding an escape from history, or demand that discipline be restored to save imperial civilization. As argued here, with particular emphasis on the various images of animals in the poem, the empire is always falling because of its lack of love.

Beginning with an analysis of Auden's interest in two historians (de Rougemont and Rosenstock-Huessy), this chapter shows how Auden developed a conception of history that eschewed grand narratives without dismissing historiography that seeks long-range phenomena. Auden criticizes de Rougemont and contrasts him with Freud, whose analysis of love is a major element of Auden's 1939 elegy. The chapter then examines a series of reviews Auden wrote in the early 1950s that present Freud as a paradigmatic historian concerned with unique historical facts rather than natural-scientific lawfulness. The chapter concludes by showing how "Homage to Clio" adopts and transforms Auden's insight into the origin of psychoanalysis, such that the poet attunes himself to a historical sense that questions the very kind of poetry he is writing—poetry that honors (rather than monumentalizes, disregards, or trivializes) history.

5 From Poem to Volume
chapter abstract

This chapter expands its inquiry into Auden's understanding of the muse of history by reflecting on the poems in Homage to Clio where she is mentioned. The tacit conflict among the three versions of Clio becomes the starting point for reflection on the entire volume, beginning with an apparently non-historical poem, "Reflections in a Forest," where the silence of nature becomes the setting for reflection on social conformity. The chapter then examines a series of poems centered on Roman poets, first Virgil, who "betrays" his muse by presenting the empire as the ossification of historical change, then poets of the late Roman Empire, who withdraw into pure formalism. The chapter concludes with an analysis of Auden's Wittgenstein-like account of his attempt to write a poem absolutely true to a unique event. Auden's "unwritten poem" shows the limits of poetic language.

Beginning with a discussion of a "nature" poem Auden substitutes for the central "unwritten poem" of Homage to Clio, this chapter shows how Auden undertakes an anthropological turn that begins with "Limbo Culture." Auden adopts the voice of an anthropologist reporting on the distant culture of his contemporaries and then proceeds deeper into hell: "There Will Be No Peace" is a chilling exposition of "hate for hate's sake" and is followed by a poem about the murder of a Christian theologian in a Nazi concentration camp. Auden's notebooks suggest he began but abandoned a poem about the Shoah. Thus does a second "unwritten poem" punctuate the volume. The chapter concludes with an analysis of that poem's replacement, "Good-bye to the Mezzogiorno," where the poet, ambivalently identifying with the Goethean "stamp," returns to a "guilt culture." Still, he leaves the last word to the reader, and that word is "happy."

The Coda concludes the volume by bringing together Auden's "Bathtub Thoughts" (from Homage to Clio) with Grace Nichols' "Thoughts drifting through the fat black woman's head while having a full bubble bath" (from her collection The Fat Black Woman's Poems). Nichols' poem adopts the word with which Auden begins "Dame Kind," steatopygous, and utterly transforms it through emphatic repetition. As is shown here, the word was constructed as a colonial instrument—a way to pretend that a literal truth is being spoken when in fact a colonial delusion is being performed. Cognizant of this, Auden begins "Dame Kind" with an image of nature that solicits catastrophe. Nichols' bathtub thoughts lightly re-appropriate all of the principal concerns of Homage to Clio—anthropology, history, theology,—and add a line that includes an implicitly prophetic moment in which the falsehood embodied in the construction of "steatopygous" collapses.