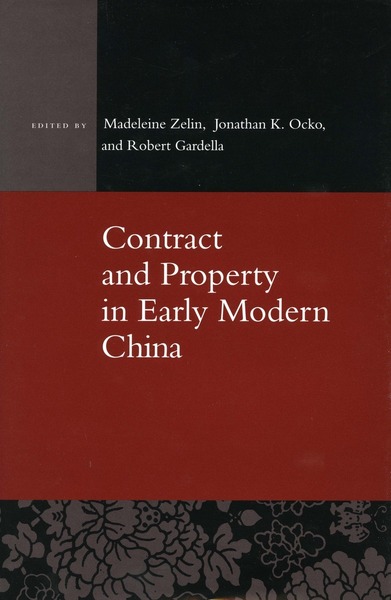 Contributors for Contract and Property in Early Modern China

Mark A. Alle is an associate professor in the Department of History, Loyola University, Chicago. He is the author of Law and Local Society in Late Imperial China: Northern Taiwan in the Nineteenth Century and "Code, Culture, and Custom: Foundations of Civil Case Verdicts in a Nineteenth-Century County Court." His current work focuses on the nineteenth-century Sichuan magistrate Liu Heng.

Thomas Buoye is associate professor of history at the University of Tulsa. He is the author of Manslaughter, Markets, and Moral Economy: Violent Disputes over Property Rights in Eighteenth-Century China and A Study Guide to the Chinese: Adapting the Past, Facing the Future. He is currently working on a large-scale study of capital punishment and Confucian justice in eighteenth-century China.

Myron L. Cohen is Professor of Anthropology and a member of the East Asian Institute at Columbia University. He has published widely on his fieldwork in southern Taiwan, Hebei, Sichuan, and Shanghai. His current research focuses on social and cultural change in China and Taiwan; Chinese family organization, religion, and economic culture; and the historical anthropology of late imperial China.

Feng Shaoting has been working at the Shanghai Municipal Archives since receiving his BA degree in history from East China Normal University. His current positions at the archives are several: researcher, director of the editing and research department, and director of the materials research center. He also supervises doctoral dissertations in the Department of History at Fudan University, where he is an adjunct professor.

Robert Gardella is a professor in the Humanities Department at the U.S. Merchant Marine Academy. He is one of the founders of the Chinese Business History Association and editor of its newsletter, as well as the author of Harvesting Mountains: Fujian and the China Tea Trade, 1757-1937 and numerous articles on Chinese economic history.

Man Bun Kwan teaches in the Department of History, University of Cincinnati, where he is an associate professor. His previous work includes The Salt Merchants of Tianjin: State-Making and Civil Society in Late Imperial China. He is now editing a series of archival materials from the Tianjin Municipal Archives and writing a business history of the Yongli Chemical Industries during the Republican period.

Jonathan Ocko is a Professor of History and Head of the Department of History at North Carolina State University, as well as an adjunct professor at Duke Law School. He is the author of Bureaucratic Reform in Provincial China as well as articles on law and society in the nineteenth and twentieth century. He is currently completing a manuscript on concepts of justice in late imperial China and is working with Madeleine Zelin on research based on the documents collected for the Luce Project.

Anne Osborne teaches at Rider University, where she is an associate professor of history. She is the author of Barren Mountains, Raging Rivers: The Ecological Effects of Social and Economic Change in Late Imperial China.

Tomoko Shiroyama received her Ph.D in history from Harvard University and is an associate professor of economics at Hitotsubashi University, Tokyo, Japan. She is currently revising her dissertation, "China Under the Depression: The Regional Economy of the Lower Yangzi Delta, 1931-37," into a broader study of the Chinese economy during the 1930s.

Madeleine Zelin is Professor of Modern Chinese History at Columbia University. She is the author of The Magistrate’s Tael: Rationalizing Fiscal Reform in Early Ch’ing China and numerous articles on Chinese legal and economic history, as well as the translator of Mao Dun’s Rainbow. She is currently completing her study of the salt industry in Zigong and collaborating with Jonathan Ocko on research based on the documents collected for the Luce Project.