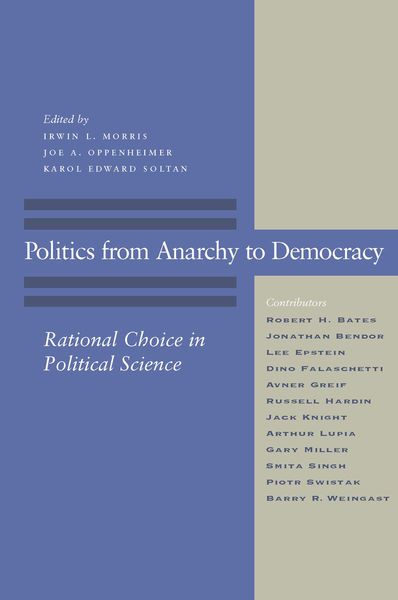 Contributors
Table of Contents
Contributors for Politics from Anarchy to Democracy

Contributors for Politics from Anarchy to Democracy

Robert H. Bates is Eaton Professor of the Science of Government at Harvard University and a Faculty Associate of the Center for International Development.  His most recent book is Prosperity and Violence, and his most recent articles focus on political violence.

Jonathan Bendor is Professor of Political Economy at the Graduate School of Business, Stanford University.  His research largely focuses on models of bounded rationality, evolutionary analyses of political institutions, and theories of bureaucracy.

Lee Epstein is the Edward Malinckrodt Distinguished Professor of Political Science and Professor of Law at Washington University in St. Louis.  Her publications include Constitutional Law for a Changing America and The Choices Justices Make.

Dino Falaschetti writes on political economy and corporate governance as an Assistant Professor of Economics at Montana State University and a Robert Wood Johnson Foundation Scholar in Health Policy Research at the University of California at Berkeley.

Avner Greif is the Bowman Family Endowed Professor of Humanities and Sciences, Professor of Economics, and Faculty Fellow at CREDPR, Stanford University.  His research concentrates on the theoretical and empirical relationships between institutions and economic, political, and social outcomes.

Russell Hardin is Professor of Politics at New York University and of Political Science at Stanford University.  He is the author of Collective Action, Morality Within the Limits of Reason, One for All, Liberalism, Constitutionalism, and Democracy, Trust and Trustworthiness, and Indeterminacy and Society.  He has long been a member of the Board of Trustees of the Carnegie Council on Ethics and International Affairs.

Jack Knight is the Sidney W. Souers Professor of Government at Washington University in St. Louis.  His publications include Institutions and Social Conflict, Explaining Social Institutions, and The Choices Justices Make.

Arthur Lupia is Professor in the Department of Political Science and Senior Research Scientist at the Institute for Social Research at the University of Michigan.  He uses surveys, models, and experiments to study relations between information and competence in voters, legislators, and the media.

Gary Miller is a professor of political science at Washington University in St. Louis.  He is the author of Managerial Dilemmas and several experimental papers that attempt to explore the power and limitations of rational choice models in explaining behavior in hierarchies and other institutions.

Irwin L. Morris is associate professor and director of graduate studies in the Department of Government and Politics at the University of Maryland.  His most recent book, Votes, Money, and the Clinton Impeachment deals with the political economy of legislative policy making and elections.  His other research interests include monetary policy making, public opinion and voting, and Southern politics.

Joe Oppenheimer is Professor of Government and Politics at Maryland and director of its Collective Choice Center.  His research focuses on the micro assumptions underlying rational choice modeling.  Specifically, he is modeling non-self-interested behavior and developing its implications for the attainment of justice and legitimacy in liberal democracies.  His publications include such volumes as Choosing Justice.  He is working on the implications of such models for the design of democratic institutions so as to ensure better outcomes.

Smita Singh is a Research Scholar at the Institute for International Studies at Stanford University.

Karol Edward Soltan teaches in the Department of Government and Politics at the University of Maryland in College Park.  His recent publications include Institutions and Social Order and Citizen Competence and Democratic Institutions.

Piotr Swistak is an associate professor in the Department of Government and Politics in the Applied Mathematics and Computation Program of the Department of Mathematics at the University of Maryland at College Park.  A large part of his current research focuses on understanding how social and political institutions can be derived as necessary elements of robust equilibria.

Barry R. Weingast is a Senior Fellow, Hoover Institution, and the Ward C. Krebs Family Professor, Department of Political Science, Stanford University.  He was elected to the American Academy of Arts and Sciences in 1996.  His research focuses on the political foundations of markets, economic reforms, and regulation in American, comparative, and historical perspectives.