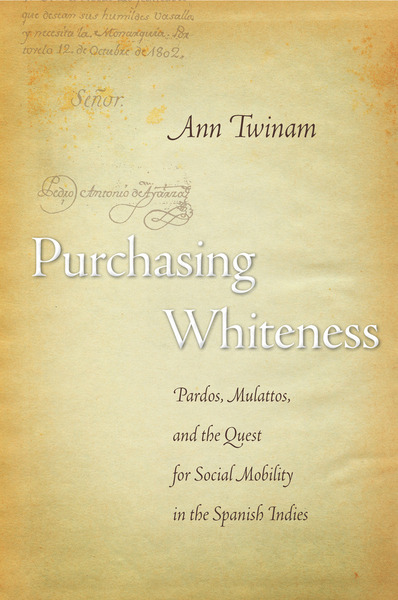 Purchasing Whiteness
Pardos, Mulattos, and the Quest for Social Mobility in the Spanish Indies
Ann Twinam

It is confession time. I seemed fated and privileged for the locale of my books to begin in Antioquia, Colombia. As a graduate student, I wondered why Medellín, the modern capital of the department of Antioquia, was one of those few places in Latin America where, at the beginning of the twentieth century, locals carried textile machinery on their backs over the Andes to begin one of the rare indigenous industrializations in Latin America. Researching the origins of this Antioqueño entrepreneurship in Miners, Merchants and Farmers in Colonial Colombia sent me back to an earlier era and a society where the presence and absence of natural resources demanded multiple investments and flexible notions of wealth.1 This promoted an entrepreneurial ethos that led some in the nineteenth century to label Antiqueños as the Jews of Colombia. Capital accumulation resulting from coffee exports would fuel that later industrialization and prove to be but another legacy of that earlier way of being, or modo de ser.

Knowledge of the world of eighteenth-century Antioquia also led me to Gabriel Muñoz, who, even though a wealthy merchant, found himself excluded from prestigious service on the Medellín city council, or cabildo. Publicly denied the honorific title of Don on the street, he sued the royal official who spurned him. Although he won his lawsuit, he realized that his illegitimacy made him vulnerable to further insult, and so he purchased a gracias al sacar, a royal decree that erased the defect of his birth.2 It also led to his acceptance by local elites—he eventually assumed that coveted position on the cabildo.

Wondering if there were others who experienced similar discrimination and sought redress led me to the Archive of the Indies in Seville and to archives throughout Spanish America. In Public Lives, Private Secrets, I traced the lives of 244 who applied for a gracias al sacar to erase their illegitimacy.3 Their histories not only provided insight into their private and public worlds but illuminated those of their families, friends, local elites, and imperial officials as they negotiated issues surrounding gender, honor, sexuality, and illegitimacy in eighteenth-century Spanish America.

A final confession. One of the most commonly asked questions by colleagues as I sent Public Lives, Private Secrets to press was: “What about the mulattos and pardos (brown-skinned) who purchased whiteness through gracias al sacar? Aren’t you going to write about them?”4 They inquired because the same process that allowed Gabriel Muñoz to pay to eliminate his illegitimacy also permitted pardos and mulattos to buy whiteness. In 1795, the Spanish crown had issued an official price list (arancel) for the Americas that included both legitimation and whitening among seventy-one purchasable options. My answer at the time was that I had just finished a huge manuscript, and although I mentioned the whiteness option that there was neither space nor time to do justice to that theme. I agreed that it was a compelling topic and I promised that I would.

This monograph fulfills that pledge. Yet, I could not know, as I explored what I originally conceived as a topic focused solely on the purchase of whiteness, where it would eventually evolve. I began to wonder why those pardos and mulattos who petitioned the crown in the mid-eighteenth century for the whitening gracias al sacar felt they could do so—and why would the monarch take their requests seriously? It became imperative to understand the accomplishments of their ancestors, to understand the historic processes that facilitated those quests by earlier generations that had opened even wider paths for their descendants.

I began to realize that the history of the whitening gracias al sacar could only be told as inextricably linked to centuries of struggles as Africans and their mixed-blood descendants (castas) moved from slavery to freedom, to status as vassals, and finally to citizenship.5 Many who appear in the following pages proved to be unheralded civil rights pioneers. While they seldom directly challenged the legitimacy of the overarching hierarchy, they nonetheless engaged Spanish officials and local elites and contested imperial norms as they fought to eliminate discrimination. Even at the twilight of empire, as the monarchy threatened to tear apart, peninsular and American delegates in the Cortes of Cádiz would continue to debate equal status for the castas.

What follows suggests that the whitening gracias al sacar emerged as but one variant, an official reflection of widespread practices that had facilitated pardo and mulatto mobilities for centuries. Even those refused whitening by the Council of the Indies were able to follow alternative paths and sometimes achieve their goals. More significantly, unknown thousands would also informally enjoy the benefits of partial or full whitening. The gracias al sacar proved liminal, but not because of the few who applied for it or the even fewer who received it. Rather, its history coincides with the larger and mostly untold story of casta mobility in Spanish America. The extent to which such struggles failed and succeeded provides striking insight into those processes of exclusion and inclusion that shaped the texture of discrimination within the Spanish empire.

It seems appropriate that at least one part of this story begins again in Antioquia, for the Valenzuela brothers, rich merchants from that colonial capital, were the first pardos in the Indies to receive a decree from the crown that made them white. However, there is much to explore before they appear. The best way to start would be with some first “Conclusions,” revisiting more than a century of scholarly fascination with the concept that pardos and mulattos could purchase whiteness.

2. Testimony customarily contained terms such as “defect” or “stain” to describe African ancestry or illegitimacy. This created a dilemma how to remain faithful to eighteenth-century usage and understanding while cognizant that contemporary conceptualizations reject these as defects or stains. The resolution was to provide quotes when such terms derive from documents but also to use them as descriptors throughout the text in an emic fashion (see Chapter 2), with the understanding that these terms reflected the vocabulary and constructions of that (but certainly not of this) time.

4. See Chapter 2 for discussion of the similarities and differences between the terms “pardo” and “mulatto.”

5. For varying usage of the term “casta,” see the discussion in Chapter 2.