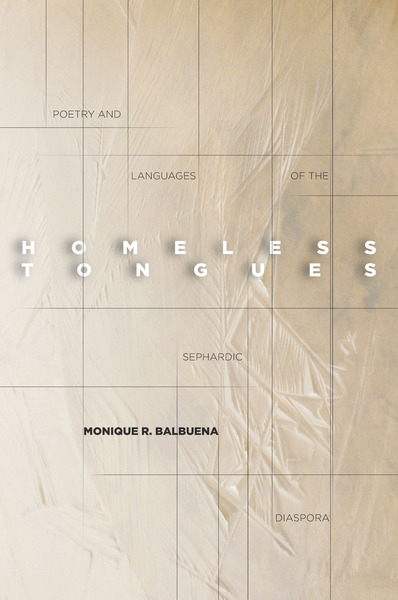 This introduction first introduces poet Clarisse Nicoïdski as a Sephardic poet who shifts languages and genres when she moves from French to Ladino, and prose to poetry, when confronting the death of her mother, her people and her culture. Then the introduction briefly presents Deleuze and Guattari's formula for "minor literatures" and the counter-arguments this book presents to it. The text then proceeds discussing basic concepts that are central to the book and to the poets here discussed: genres of Sephardic poetry, the Judeo-Spanish language, its development and its many names, multilingualism and Jewish langauges, and Diaspora.

This chapter presents Sadia Lévy, an Algerian poet who attempted to inscribe himself in the gallery of French Symbolists while writing in a French enriched by infusions of Hebrew and Judeo-Spanish, activating biblical and Kabbalistic genres in his poems. Lévy allows us to look at the development of modernism from a different angle, and serves as an example that will prompt changes in Jewish historical narrative, destabilizing certain views of Jewish culture, more specifically about Sephardi and North African Jews. Writing in French in colonial Algeria, Lévy makes us rethink the boundaries that define a French and a Francophone author. Having written one of the first Maghrebi novels in French, his precedence has gone unrecognized because as a Jew, he is considered French—an ideological exclusionary act that misses his ambivalent position and does not recognize that the privilege of his French citizenship is more artificial than ever.

Chapter 2, on Israeli contemporary poet Margalit Matitiahu, focuses on her bilingual Hebrew-Ladino books—especially her first volumes, Kurtijio Kemado and Alegrika. It discusses the critical reception of her work within Hebrew and Ladino literatures and, observing that her readers and critics are for the most part still divided across linguistic borders, offers a reading of two poems in both their Hebrew and Ladino versions, with attention to the specificities of the languages and their respective audiences, and observing the poet's strategies of self-translation. This chapter also brings to the foreground the politics of Jewish languages and questions the concepts of diasporic and nationalist identities, pointing to a critique of the nation and the attempted creation of a homogenizing national subject. It also touches upon the place of the Shoah in Sephardic memory and identity.

Chapter 3, about Argentine Ashkenazi poet Juan Gelman, destabilizes notions of fixed identity and breaks down dichotomic divisions of ethnic origins as it traces Gelman's gradual rewriting of himself as a Sephardic Jew at the very moment when he most identifies as a Jew. It reads Gelman's bilingual Ladino-Spanish collection Dibaxu as the culmination of his rewritings of Spanish canonical authors. It focuses on the "process of self-Sephardization," initially triggered by Gelman's historical condition as a political exile, and then fed by his translation and rewriting of canonical medieval Spanish Hebrew poets. He proceeds in a linguistic "excavation" of the many layers in the Spanish language, and writes himself as a Sephardic Jew. In opposition to an oppressive regime with which his language is associated, Gelman makes a deterritorializing move and radically assumes a new language: the Jewish, exilic and minor Ladino.

The conclusion revisits the main arguments of the book and discusses new developments and possibilities for the creative production in Ladino. It seeks to turn the focus from the atmosphere of death that surrounds the language to an acknowledgement, or even celebration, of Sephardim as present-day, creative, living Jews.