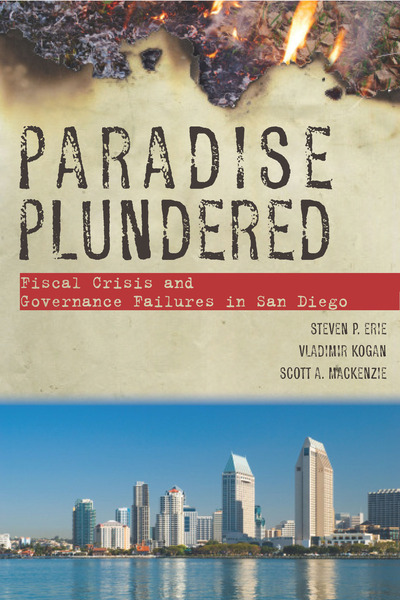 Winner of the 2012 Best Book Award, sponsored by the APSA Urban Politics Section.

The early 21st century has not been kind to California's reputation for good government. But the Golden State's governance flaws reflect worrisome national trends with origins in the 1970s and 1980s. Growing voter distrust with government, a demand for services but not taxes to pay for them, a sharp decline in enlightened leadership and effective civic watchdogs, and dysfunctional political institutions have all contributed to the current governance malaise.

Until recently, San Diego, California—America's 8th largest city—seemed immune to such systematic governance disorders. This sunny beach town entered the 1990s proclaiming to be "America's Finest City," but in a few short years its reputation went from "Futureville" to "Enron-by-the-Sea." In this eye-opening and telling narrative, Steven P. Erie, Vladimir Kogan, and Scott A. MacKenzie mix policy analysis, political theory, and history to explore and explain the unintended but largely predictable failures of governance in San Diego.

Far from a sunny story of paradise and prosperity, this account takes stock of an important but understudied city, its failed civic leadership, and poorly performing institutions, policymaking, and planning. Though the extent of these failures may place San Diego in a league of its own, other cities are experiencing similar challenges and political changes. As such, this tale of civic woe offers valuable lessons for urban scholars, practitioners, and general readers concerned about the future of their own cities.

Steven P. Erie is a Professor of Political Science and Director of the Urban Studies and Planning Program, University of California, San Diego. He is the author of Rainbow's End: Irish Americans and the Dilemmas of Urban Machine Politics (1998), Globalizing L.A.: Trade, Infrastructure, and Regional Development (Stanford, 2004), and Beyond 'Chinatown': The Metropolitan Water District, Growth, and the Environment in Southern California (Stanford, 2006).

Vladimir Kogan is a Ph.D. candidate in the Department of Political Science at the University of California, San Diego.

Scott A. MacKenzie is Assistant Professor of Political Science at the University of California, Davis.

"Paradise Plundered is a must-read for urban scholars and an invaluable resource for political science and public affairs courses, as it enriches an urban governance literature that has a place in naive, simple-opposition, pluralist, and elite explanations of urban policy. It convincingly demonstrates how pluralist forces expressed through district election and restrictive fiscal institutions interact with elite development interests in the absence of a responsible civic sector or public officials committed to broader public interests. . . The study makes an undeniable contribution to both political science scholarship and policy practice by compellingly elaborating the forces that constrain effective urban governance."

"San Diego may have been the only major city in the United States (8th largest in population) lacking a significant academic book analyzing its urban politics and governance. No more. With Paradise Plundered we now have a well researched and reasoned volume that fills that gap . . . Paradise Plundered's organization, clarity, and writing style makes it well suited not only for academics and graduate and undergraduate students, but also for practitioners and citizens interested in understanding how political power is exercised in American metropolitan areas."

"While making some comparisons with other California cities, the book is at its best when focusing on the politics and collusions used to wring private gain out of transaction alleged to be of public benefit. This is a cautionary tale that should be read by anyone concerned with governance, economic development, and business-government relationships in American cities. . . Highly recommended."

"It takes more than scenery to make a successful city—or a solvent state, for that matter. Chronicling the near-deliberate dismantlement of San Diego, Paradise Plundered relates how a favored city squandered its heritage and thereby set forth a warning to the rest of the nation."

"Paradise Plundered provides a trenchant analysis of governance and public policy in San Diego over the past two decades. The authors show how weak public institutions and persistent anti-tax sentiment created a grossly underfunded pension system, massive structural deficits, and a balkanized city. San Diego's fall from grace offers a cautionary tale that is a must read for anyone who cares about effective urban government."

"A landmark expose of how fiscal populism provides camouflage for private greed in America's most badly governed big city. San Diego's celebrated 'public-private partnerships' are unmasked as Ponzi schemes on the road to municipal ruin."

"Paradise Plundered chronicles San Diego's decline from one of the nation's best governed cities to its current position as poster child for inept city management. Meticulously researched and convincingly argued, [it] is a cautionary tale for any community that demands good government but is unwilling to pay for it." 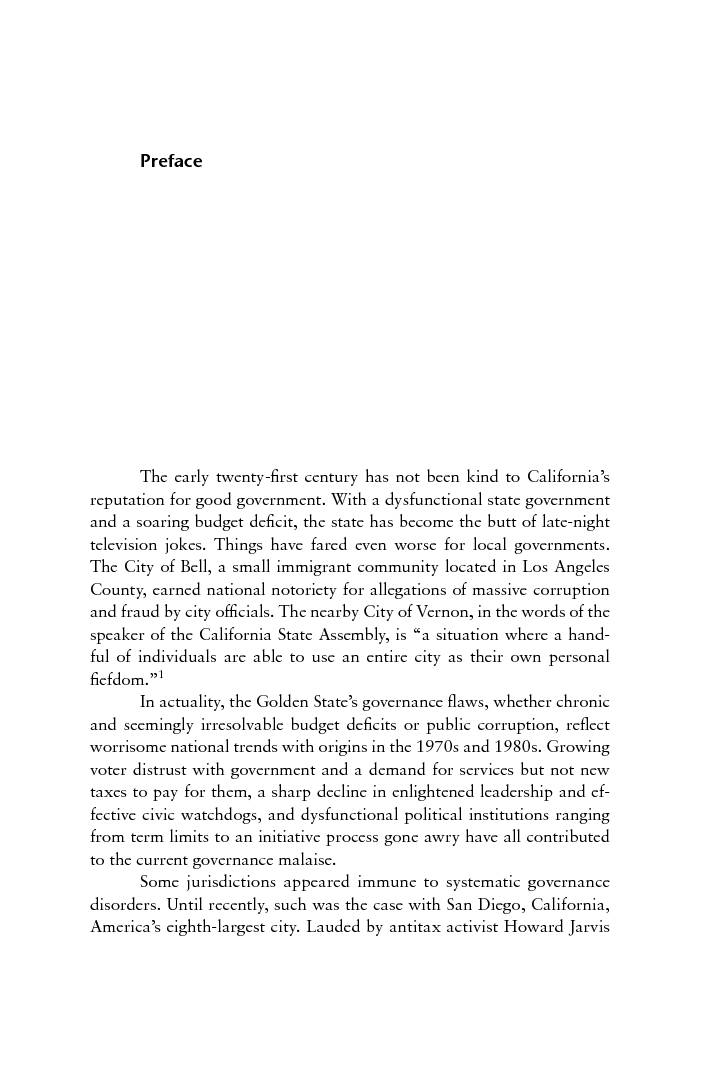 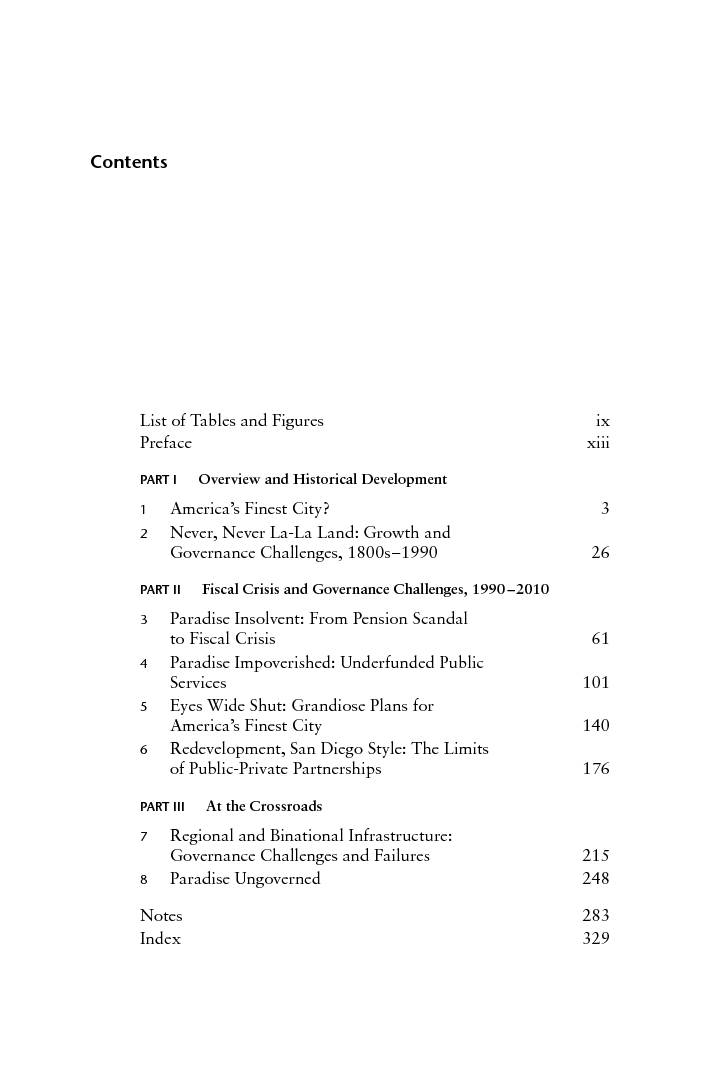 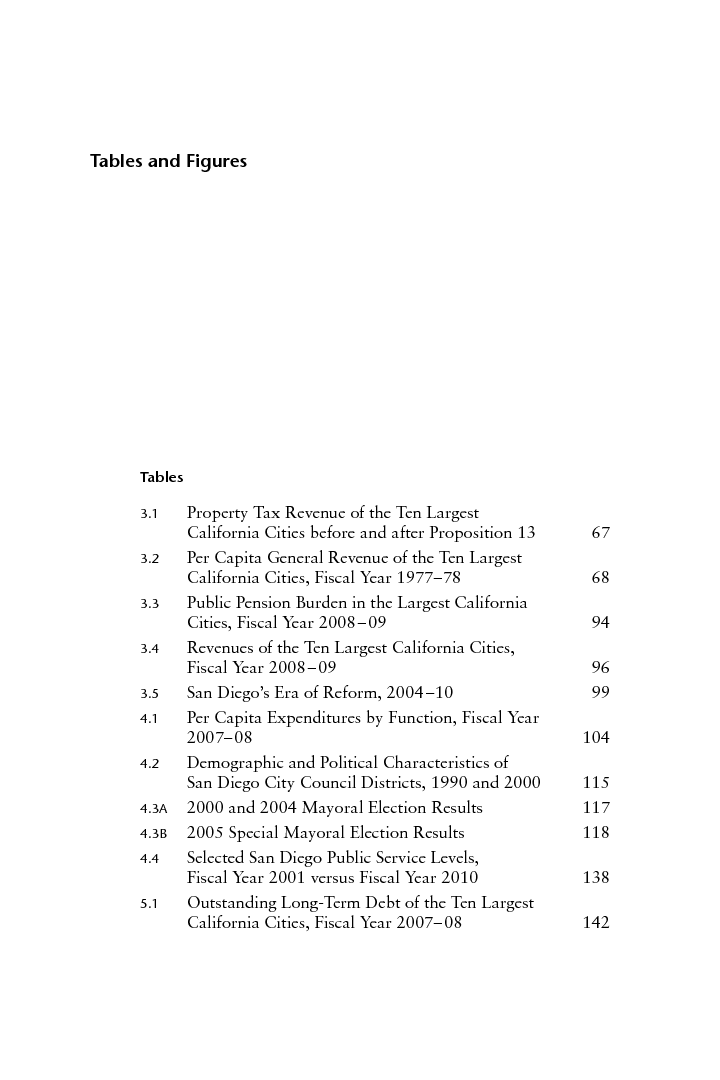 California is falling apart; here's why