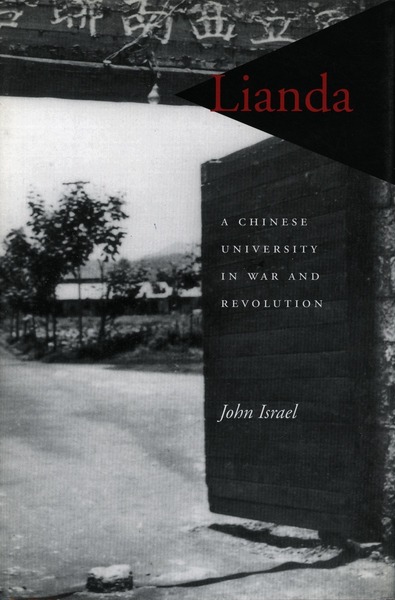 Lianda
A Chinese University in War and Revolution
John Israel

In the summer of 1937, Japanese troops occupied the campuses of Beijing’s two leading universities, Beida and Qinghua, and reduced Nankai, in Tianjin, to rubble. These were China's leading institutions of higher learning, run by men educated in the West and committed to modern liberal education. The three universities first moved to Changsha, 900 miles southwest of Beijing, where they joined forces. But with the fall of Nanjing in mid-December, many students left to fight the Japanese, who soon began bombing Changsha.

In February 1938, the 800 remaining students and faculty made the thousand-mile trek to Kunming, in China’s remote, mountainous southwest, where they formed the National Southwest Associated University (Lianda). In makeshift quarters, subject to sporadic bombing by the Japanese and shortages of food, books, and clothing, students and professors did their best to conduct a modern university. In the next eight years, many of China’s most prominent intellectuals taught or studied at Lianda. This book is the story of their lives and work under extraordinary conditions.

Lianda’s wartime saga crystallized the experience of a generation of Chinese intellectuals, beginning with epic journeys, followed by years of privation and endurance, and concluding with politicization, polarization, and radicalization, as China moved from a war of resistance against a foreign foe to a civil war pitting brother against brother. The Lianda community, which had entered the war fiercely loyal to the government of Chiang Kai-shek, emerged in 1946 as a bastion of criticism of China’s ruling Guomindang party. Within three years, the majority of the Lianda community, now returned to its north China campuses in Beijing and Tianjin, was prepared to accept Communist rule.

In addition to struggling for physical survival, Lianda’s faculty and students spent the war years striving to uphold a model of higher education in which modern universities, based in large part on the American model, sought to preserve liberal education, political autonomy, and academic freedom. Successful in the face of wartime privations, enemy air raids, and Guomindang pressure, Lianda’s constituent universities eventually succumbed to Communist control. By 1952, the Lianda ideal had been replaced with a politicized and technocratic model borrowed from the Soviet Union.

John Israel is Professor of History at the University of Virginia. He is the author of Student Nationalism in China, 1927-1937 (Stanford, 1966).