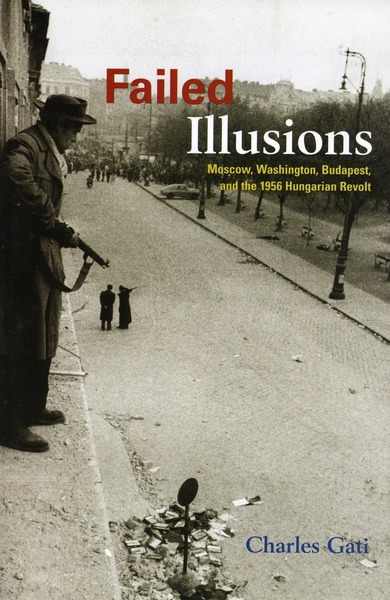 Winner of the 2007 Marshall Shulman Book Prize, sponsored by the American Association for the Advancement of Slavic Studies.

Winner of the 2007 Marshall Shulman Prize

The 1956 Hungarian revolution, and its suppression by the U.S.S.R., was a key event in the cold war, demonstrating deep dissatisfaction with both the communist system and old-fashioned Soviet imperialism. But now, fifty years later, the simplicity of this David and Goliath story should be revisited, according to Charles Gati's new history of the revolt.

Denying neither Hungarian heroism nor Soviet brutality, Failed Illusions nevertheless modifies our picture of what happened. Imre Nagy, a reform communist who headed the revolutionary government and turned into a genuine patriot, could not rise to the occasion by steering a realistic course between his people's demands and Soviet geopolitical and ideological interests. The United States was all talk, no action, while Radio Free Europe simultaneously backed the insurgents' unrealizable demands and opposed Nagy. In the end, the Soviet Union followed its imperial impulse instead of seeking a political solution to the crisis in the spirit of de-Stalinization.

Failed Illusions is based on extensive archival research, including the CIA's operational files, and hundreds of interviews with participants in Budapest, Moscow, and Washington. Personal observations by the author, a young reporter in Budapest in 1956, bring the tragic story vividly to life.

Charles Gati is a political scientist who fled his native Hungary during the 1956 revolt, and is now Senior Adjunct Professor of European Studies at Johns Hopkins University. His previous positions have included teaching Central and Eastern European as well as Russian politics and foreign policy at Union College and Columbia University. He served as a Senior Adviser on the Department of State's Policy Planning Staff in the early 1990's. His publications include The Bloc That Failed: Soviet-East Relations in Transition (1990), and Hungary and the Soviet Bloc (1986).

"Gati's book towers high above the rest as by far the best book published on 1956... his work aims to examine what happened and to point to what could have happened given the other complex factors that were in play in 1956. The fruit of Gati's effort is an engaging, fascinating, and well-written narrative coupled wit masterful historical and political analysis."

"Gati draws on reams of new research and documentary evidence from Hungary, while ferreting out scores of fascinating documents from the U.S. archives. Specialists on this subject will benefit immensely from this work, but the book is written in such an engaging manner that it will also appeal to a more general audience."

"Failed Illusions casts incisively a new perspective on three key dimensions of the historic drama that was the Hungarian Revolution: the unsavory background and the heroic epiphany of Imre Nagy, the revolution's tragic leader; the confused, disruptive, and ultimately devious Soviet efforts to manipulate the Hungarian communists; and the impotent futility of US posturing which masqueraded as 'the policy of liberation.' Riveting as a story, significant as a history."

"Born and raised in Hungary, Gati...was a young journalist in Budapest at the time. Using hundreds of documents in the archives in Budapest, Moscow, and Washington, he has written a thorough and scholarly analysis of the revolution."

"Reading Failed Illusions is like reading a John le Carre novel with documentation. Charles Gati provides a suspenseful inside look into the types of issues and characters le Carre has portrayed in his novels yet Gati's story is all too real and tragic."

"...Failed Illusions is a brilliant exercise in the counterfactual, a catalog of the "what ifs" that should be considered when thinking about the creation and perpetuation of the Soviet bloc."

"Failed Illusions sheds new light on American policy, especially the controversial role of Radio Free Europe as it encouraged the rebels....[and] Mr. Gati's excellent footnotes, several quite personal and poignant, give added depth to the story."

"Charles Gati's Failed Illusions is a searching, scholarly account of the political calculations of the Kremlin, the White House, and the Hungarian Communist leadership."

"The product of more than 15 years of extraordinary research and interviewing, much of it in Hungarian, his book highlights just how much we have to learn about key Cold War events and, more important, how we should go about learning it."

"The '56-anniversary book that's gotten the most press is Charles Gati's Failed Illusions, which, in meticulous scholarly detail, fortifies the new, more depressing argument for why America didn't ride to the rescue with either military might or aggressive diplomacy."

"Gati has undertaken an important, brilliant reappraisal of the 1956 Hungarian uprising and its subsequent violent suppression. Scholars of the Cold War, Hungarian history, and anyone interested in the popular revolution will be spellbound by this book."

"Charles Gatis Failed Illusions gives a comprehensive account of the Revolution in succinct and elegant prose along with his own analysis and some speculation."

"Riveting as a story, significant as a history."

"Gati proposes a more realistic and critical analysis of the uprising than has been presented before...Gati has written an imminently readable book. I would recommend this as one of the best histories of the Hungarian uprising of 1956, which combines the best of personal recollection with archival research."

"This important work deepens our knowledge of events through scores of new documentary findings, filling in fascinating details about events, decisions, and key players' personal philosophies and points of view. It's the only book of its kind."—Malcolm Byrne, Deputy Director and Director of Research, National Security Archive"Gati draws on a wealth of archival evidence and personal interviews to produce a remarkably readable and provocative essay, rich in astute observations and illuminating anecdotes, and leavened by fragments of his personal and intellectual history."

"Gati's book is eminently worth reading. Whether or not one agrees with his views and conclusions, it is a most valuable contribution to the scholarly literature on the subject."

"This book is a multilayered treatement of complex quetions in the history of the United State, the USSR, Hungary, the Cold War, and international realtions in general, and it will set the direction of discussion for a long time to come."