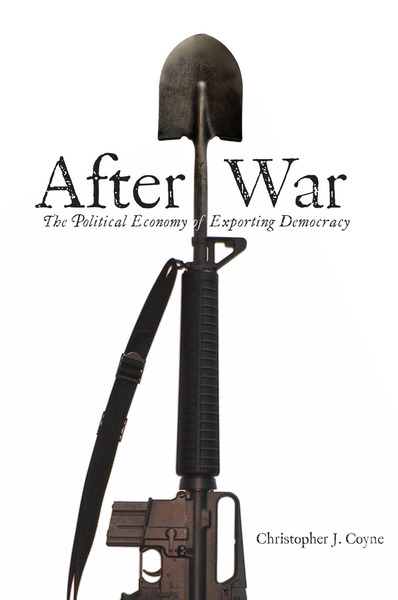 Why does liberal democracy take hold in some countries but not in others? Why do we observe such different outcomes in military interventions, from Germany and Japan to Afghanistan and Iraq? Do efforts to export democracy help as much as they hurt? These are some of the most enduring questions of our time.

Historically, the United States has attempted to generate change in foreign countries by exporting liberal democratic institutions through military occupation and reconstruction. Despite these efforts, the record of U.S.-led reconstructions has been mixed, at best. For every West Germany or Japan, there is a Cuba, Haiti, Somalia, or Vietnam.

After War seeks to answer these critical foreign policy questions by bringing an economic mindset to a topic that has been traditionally tackled by historians, policymakers, and political scientists. Economics focuses on how incentives influence human action. Therefore, within an economic context, a successful reconstruction entails finding and establishing a set of incentives that makes citizens prefer a liberal democratic order. Coyne examines the mechanisms and institutions that contribute to the success of reconstruction programs by creating incentives for sustained cooperation.

Coyne emphasizes that the main threat to Western nations in the post-Cold War period will not come from a superpower, but rather from weak, failed, and conflict-torn states—and rogue groups within them. It is also critical to recognize that the dynamics at work—cultural, historical, and social—in these modern states are fundamentally different from those that the United States faced in the reconstructions of West Germany and Japan. As such, these historical cases of successful reconstruction are poor models for todays challenges. In Coynes view, policymakers and occupiers face an array of internal and external constraints in dealing with rogue states. These constraints are often greatest in the countries most in need of the political, economic, and social change. The irony is that these projects are least likely to succeed precisely where they are most needed.

Coyne offers two bold alternatives to reconstruction programs that could serve as catalysts for social change: principled non-intervention and unilateral free trade. Coyne points to major differences in these preferred approaches; whereas reconstruction projects involve a period of coerced military occupation, free trade-led reforms are voluntary. The book goes on to highlight the economic and cultural benefits of free trade.

While Coyne contends that a commitment to non-intervention and free trade may not lead to Western-style liberal democracies in conflict-torn countries, such a strategy could lay the groundwork for global peace.

Christopher J. Coyne is Assistant Professor, Department of Economics, West Virginia University, a Research Fellow at the Mercatus Center, and an Associate Editor for the Review of Austrian Economics. He has published articles in numerous scholarly journals, including Cato Journal, Constitutional Political Economy, Economic Journal, Journal of Economic Behavior and Organization, Kyklos, and Review of Political Economy.

"Professor Coyne is obviously a dove rather than a hawk. But he accepts the case for occasional intervention for humanitarian reasons or to protect US citizens. His main suggestions are to avoid nation-building types of intervention and adopt free trade, if necessary unilaterally by the US. It is perhaps déformation professionelle for economists to overrate the spillover benefits of the latter. But peace and welfare may depend on how far the next US president accepts the main lines of his analysis—a subject even more important than the current credit crunch."

"Having recently had an opportunity to read After War . . . I've found myself trying out his application of economic principles to the analysis of armed conflicts, particularly in the case of America's current occupation of Iraq. This has proven especially useful."

"I view the key analytical point as focusing on the power of on-the-ground expectations to make the reconstruction 'game' either a cooperative or combative one. This is a difficult variable to control, but Chris offers a very good look at the best and worst attempts that the United States has made to manipulate these variables and thus export democracy. If you want to know why the Solow model doesn't seem to hold for Bosnia, or a deeper more analytic sense of why Iraq has been a mess, this is the place to go."

"A brilliant and timely contribution that should shift the debate on U.S. foreign policy and state-building. In providing new insights from economic theory on what can be expected in post-conflict situations, Coyne guides us toward attainable goals and interventions that have a better chance of success."

"[Coyne] believes forceful attacks against dictatorial regimes generally damage democracy. The recent invasion of Iraq is a prime example, he says in his new book After War . . . Most of this engaging new volume from Stanford University Press examines the economics and politics of present-day foreign policy . . . Liberal democracy cannot be exported in a consistent manner at gunpoint' is Coyne's central conclusion."

"After War adds a unique perspective on the United States's ability to impose liberal democratic institutions abroad. In clear prose, Christopher Coyne combines the economic way of thinking with an appreciation of politics, history, culture, and social factors to expose why past efforts to export liberal democracy have failed and why we should be skeptical of future efforts."

"After War supplies valuable historical context and offers new and vital perspectives on what is perhaps the major foreign policy and security challenge facing the United States and Europe at the start of the 21st century. It explains why the United States should never have intervened militarily in Afghanistan or Iraq and why it has no viable exit strategy other than unilateral withdrawal, leaving, as the Soviet Union did in 1989, a region awash in weaponry to be taken up by the next generation of insurgents, warlords, terrorists and other enemies of liberal democracy."

"Coyne demonstrates convincingly that national reconstruction seldom succeeds, and he presents the essential economic concepts and principles that allow us to understand why it usually fails . . . Economists will gain enlightenment from Coyne's compact, well-documented presentation of a great variety of relevant facts from some of the leading cases of national reconstruction in which the US government has engaged during the past century."

—The Review of Austrian Economics 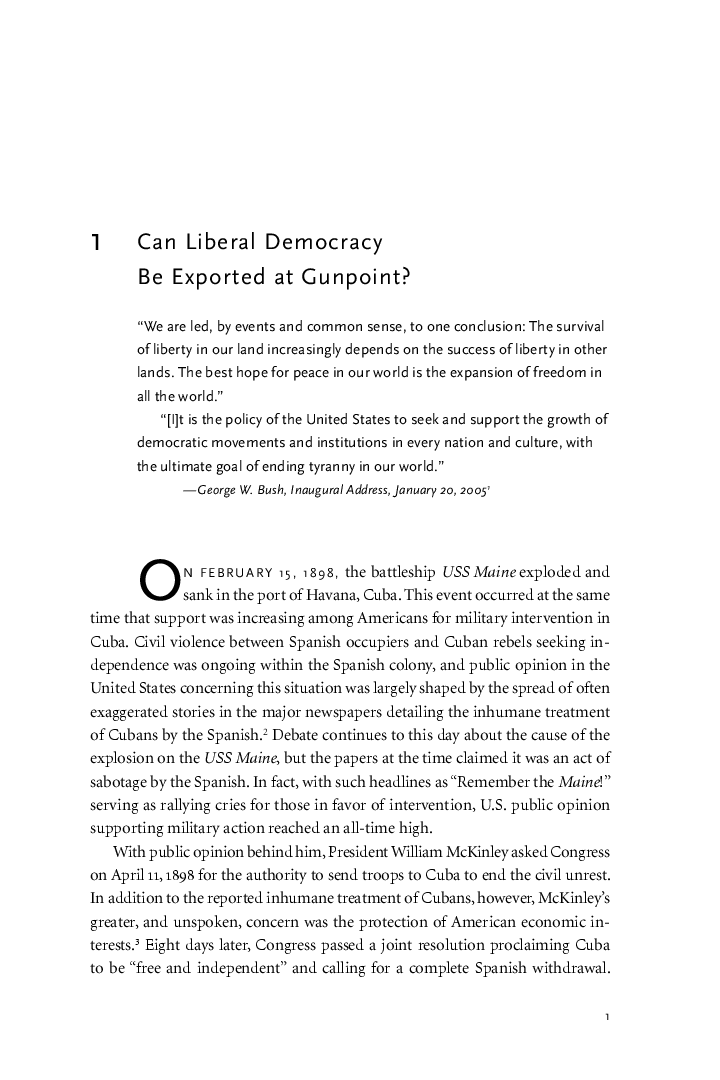 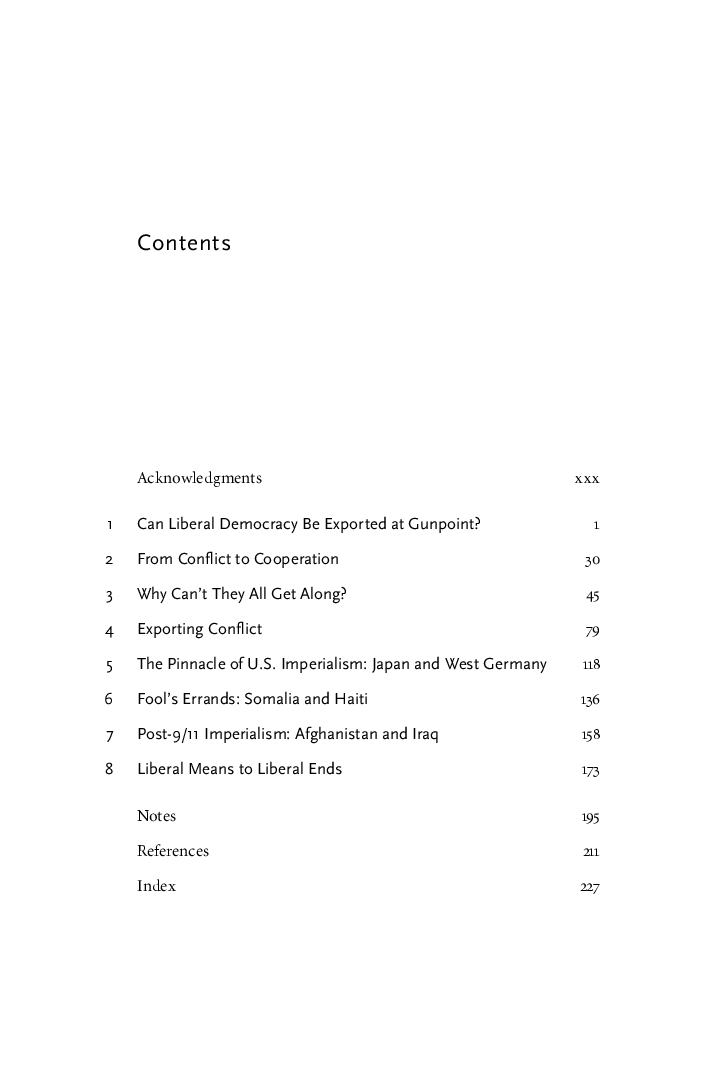