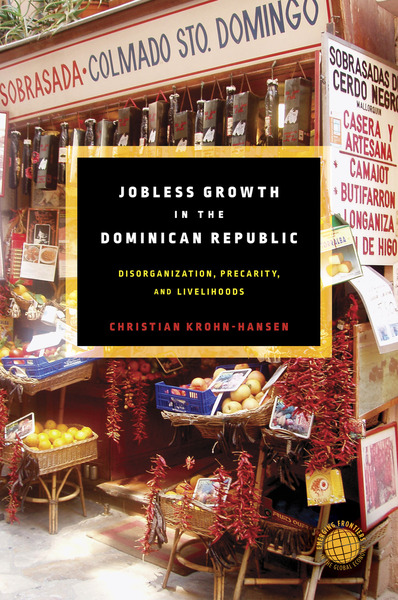 The Dominican Republic has posted impressive economic growth rates over the past thirty years. Despite this, the generation of new, good jobs has been remarkably weak. How have ordinary and poor Dominicans worked and lived in the shadow of the country's conspicuous growth rates? This book considers this question through an ethnographic exploration of the popular economy in the Dominican capital. Focusing on the city's precarious small businesses, including furniture manufacturers, food stalls, street-corner stores, and savings and credit cooperatives, Krohn-Hansen shows how people make a living, tackle market shifts, and the factors that characterize their relationship to the state and pervasive corruption.

Empirically grounded, this book examines the condition of the urban masses in Santo Domingo, offering an original and captivating contribution to the scholarship on popular economic practices, urban changes, and today's Latin America and the Caribbean. This will be essential reading for scholars and policy makers.

Christian Krohn-Hansen is Professor of Social Anthropology at the University of Oslo.

"This book offers a fine-grained ethnography of everyday life and labor, and relations of debt and trust, among informal sector workers in the Dominican Republic, and powerfully illuminates how precarious entrepreneurs have struggled to get by in the context of declining wages notwithstanding the high official national growth rates of the past decades. It offers deeply compassionate portrayals of small business people such as food sellers, furniture makers and corner grocers, their negotiations with creditors and state actors, and how they have valiantly resisted state violence and corruption. The book makes a signal contribution to our understanding of the state of the Dominican urban poor today."

"Krohn-Hansen's innovative study of the diverse forms of work that Dominicans pursue in a country in which GDP growth has been accompanied by falling employment offers an inspiring model for the anthropological study of jobless growth that has challenged both neoliberal narratives of economic development and Marxist narratives of proletarianization. Through a fine-grained ethnographic analysis of people's mundane participation in various niches of the Dominican economy, including small furniture workshops, food stalls, petty trade, retail and cooperatives, this book traces the generative relations of family, household, gender and state through which a capitalist economy is produced at the intersection of heterogeneous rhythms of time and labor."

"Krohn-Hansen provides one of the best treatments available of the contemporary Dominican economy, which for decades has been characterized by a type of rapid growth producing relatively few wage-earning jobs and no wage increases. Through powerful interviews and life histories, Jobless Growth in the Dominican Republic shows how the population has turned to more independent means of livelihood with some success – as, for example, shopkeepers, street vendors, food-stall operators, and furniture makers. This important ethnographic work highlights how family, community, and cultural norms have shaped and sustained the country's independent merchant class."

"Jobless Growth in the Dominican Republic is an outstanding contribution to the anthropological understanding of capitalism. Based on an ethnography of Dominican Republic urban dwellers, Krohn-Hansen persuasively exposes the plural forms of labor that reproduce capitalist worlds and precarious livelihoods through connections and dislocations in space and time. A powerful account of people's concrete experiences of "growth" that sheds light beyond the Global South."