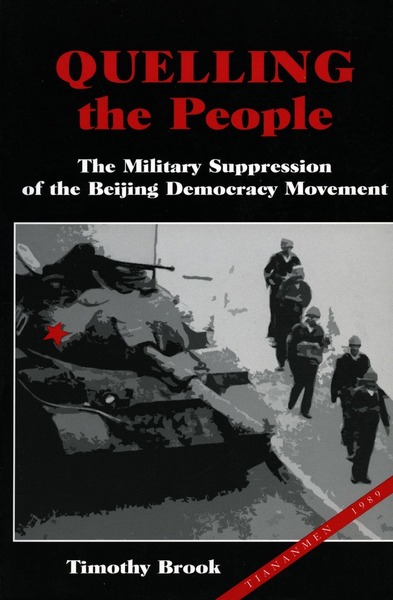 This is a riveting, day-by-day, hour-by-hour reconstruction of the massacre in Tiananmen Square on June 3-4, 1989, as well as of the crucial events in Beijing during the previous weeks that largely precipitated the massacre. The author focuses on the army—the People's Liberation Army—which, with its motto "Serve the People," had always prided itself on its close ties to the civilian population. What were the intentions of the Chinese government in mobilizing the army against civilians? Why did the troops act as they did, and what does this say about how the army would act on the next such occasion? How does the military suppression of the democracy movement help us to understand China's current predicament over democratization and human rights?

"The author has done a magnificent job of reconstructing the military mobilization in Beijing and the role of the People's Liberation Army in the bloody suppression of the Chinese people's movement. . . . A moving book that vividly displays the extraordinary bravery of the residents of Beijing."

"The author skillfully weaves eyewitness accounts into a smoothly flowing narrative. Two maps of Beijing assist the reader in following the actions described, and there is a seful chronology of events. The work should interest both generalists and specialists, and spans the disciplines of history, political science, and sociology."

"It took three and a half years for Brook to collect the pieces of this tragic puzzle. The result: a unique and vigorous study that does not try to find out 'who was wrong and who was right,' but concentrates on simple facts."