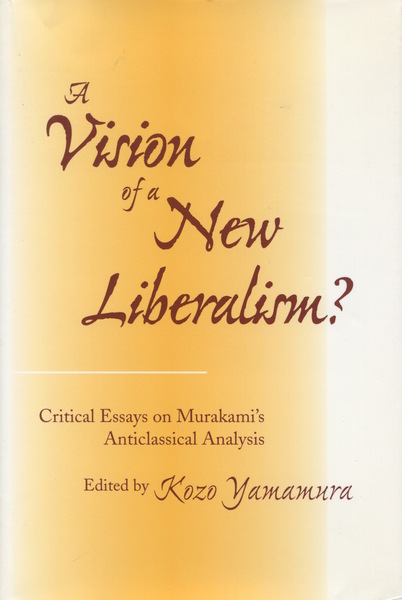 A Vision of a New Liberalism?
Critical Essays on Murakami’s Anticlassical Analysis
Edited by Kozo Yamamura

In 1992, a year before his death, Yasusuke Murakami published in Japanese An Anti-Classical Political-Economic Analysis: A Vision for the Next Century (English translation, Stanford, 1996). A work that distilled decades of research and thought by a distinguished economic theorist turned social scientist and philosopher, it sold more than 25,000 copies in Japan despite its highly scholarly nature. The book enjoyed such immediate recognition because it offered a sanguine vision for the community of nations and because Murakami's vision was supported by acute insights on, and seminal analyses of the crucial issues relating to economic growth, equality, peace, and cultural diversity we face at the end of the twentieth century.

This volume presents nine essays—by five political scientists, three economists, and a historian—that critically evaluate the vision and analyses in Murakami's book by focusing on his two key contributions. The first is "polymorphic liberalism," a new type of liberalism that reflects the needs of both developed and developing economies and the realities of the diversity of cultures; the second is "developmentalism," a long-term, multifaceted policy intervention in catch-up economic growth. The volume also contains, as appendixes, two essays that further a more complete understanding of Murakami's book: a brief summary of Murakami's "new economics," his replacement for neoclassical economics, and a discussion of England as the first developmentalist success.

All the essays deal, in one way or another, with Murakami's answers to such questions as: What new world order must be created to best provide peace and security to nations? What shared beliefs or principles can help evolve this new world order that is menaced by regional wars and serious international confrontations caused by political, economic, and ethnic-cultural conflicts? How will the character of industrialization change, and what must we do to best respond to changes that are likely to increase political and economic interdependence among nations? And what roles must the United States, the European Union, and Japan play to secure world peace, to maintain an orderly international trade regime, and to reduce disparity in nations' income and wealth?

Kozo Yamamura is the Job and Gertrud Tamaki Professor of Japanese Studies at the University of Washington. He is the translator of the English edition of An Anticlassical Political-Economic Analysis.