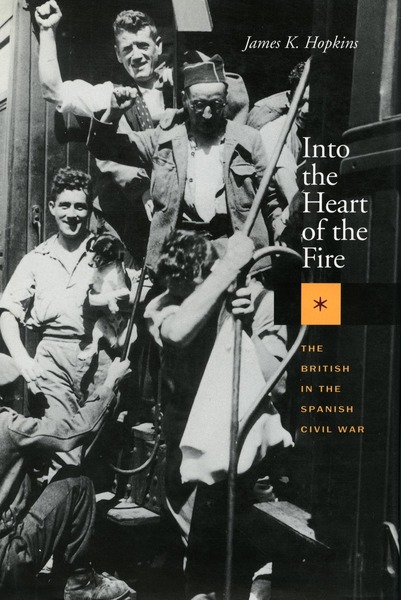 Into the Heart of the Fire
The British in the Spanish Civil War
James K. Hopkins

This book provides a compelling and vivid account of British involvement in the Spanish Civil War, examining the experience of the British volunteers in the International Brigades, and placing them in a broad intellectual, political, social, and cultural framework. Incorporating some familiar and many new voices of a turbulent decade, it analyzes the manner in which British men and women conceptualized their engagement with the political issues of their time—whether they were Oxbridge aesthetes or militants from the factories, the mines, and the ranks of the unemployed.

The event that galvanized the volunteers and the many thousands who supported them in Great Britain was the rising of General Franco and his allies against the democratically elected Second Spanish Republic on July 17, 1936. As a counterpart to German and Italian intervention on behalf of the insurgents, the Soviet Union instructed the Comintern to recruit and organize an international volunteer army to come to the aid of the Republic.

Above all, Into the Heart of the Fire establishes the fact that the British volunteers were not social or neurotic misfits. Rather, they reflected in a distinctive way the political concerns of many of their generation.

"Hopkins has demonstrated a profound intimacy with his subject. This is an outstanding work, rich in

depth and detail, and it deserves to be recognized as a major contribution to the field."American Historical Review

"Chapters of remarkable richness describe and analyse how going to Spain gave many working class autodidacts a sense of their own worth and, despite the defeat of the Spanish Republic, a belief that they were endowed with potential to change things."

"Hopkins's triumph is successfully to document both [the idealism of the British volunteers and the Communist exploitation of it]...to tremendous effect. The idealism, the disillusion, the courage, the ruthlessness, the self-sacrifice, and the self-seeking are put into perspective....He is relentlessly honest. Without a doubt, he has written the best book on British participation in the International Brigades and it is difficult, at this point in time, to see how it will be surpassed."

"In this impressive book James K. Hopkins offers both an innovative new study of the British

volunteers in the Spanish Civil War and a penetrating analysis of British radical politics in the 1930s....As a study of the British volunteers, their motivations, and their values, it is unlikely to be bettered. It will be required reading for those who study British involvment in the Civil War and it will surely make a forceful contribution to the wider re-evaluation of the role of the Communist Party in the British left of the 1930s."