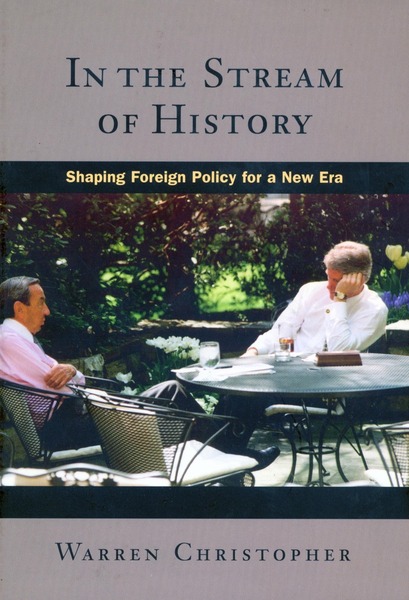 Giving the reader a unique window into the inner workings of U.S. diplomacy in President Bill Clinton’s first term, this book highlights the major foreign policy challenges faced and decisions made in a turbulent era. The book is organized around thirty seven key speeches by the Secretary of State, each introduced by an extensive essay that describes its policy context and purpose, and includes anecdotes, local color, and brief sketches of some of the leading figures on the world stage. These introductions, which constitute more than half the book, not only give the who, what, when, and where behind the speeches, but most important, explain the why and how.

For example, the group of speeches on Bosnia is preceded by an incisive account of the twists and turns of U.S. policy leading up to the Dayton Conference and the intense negotiations, involving several volatile personalities, that led to the historic Dayton agreement. Among the other subjects covered by the essays are our relations with China, Russia, Japan, Vietnam, Korea, Haiti, the Middle East, Africa, and South America; international organizations such as NATO and the United Nations; and the global issues of human rights, terrorism, nuclear threat, and the environment.

The book begins with a Prologue that emphasizes Secretary Christopher’s long-standing interest in speeches as an instrument of public policy and the decision making behind this often overlooked aspect of statecraft. It also describes how the Secretary was offered the position by President-elect Clinton, the state of affairs as he found them when he took office, and his strategy and plans for U.S. foreign policy in the post-Cold War period. An epilogue recounts the Secretary’s decision to return to private life, offers his insights on the challenges facing the United States in the international arena in the years ahead, and sets forth some suggestions for future policy makers.

Above all, this book provides ample evidence that the author took seriously the advice that United States Supreme Court Justice William O. Douglas gave him when he served as the justice’s law clerk in the 1949 term: “Get out in the stream of history, and swim as fast as you can.”

Warren Christopher served as Secretary of State from 1993 to 1997. At present, he is Senior Partner at O'Melveny & Myers, an international law firm headquartered in Los Angeles.

"For all Secretary Christopher's skill at diffusing crises, I believe his lasting legacy was built behind the headlines, laying the foundations for our future. Under his leadership we've taken on new threats like terrorism, the spread of weapons of mass destruction, and environmental degradation."

"Christopher presents a through, insightful, often eloquent examination of . . . foreign policy goals and policies. This book is testimony to the power of words and speeches in the making and selling of a nation's foreign policy and is essential reading for anyone trying to make sense out of a confused and confusing world."

"The Secretary of State who was present at the creation of the post–Cold War world allows us to begin to understand how it was done. With his legendary thoughtfulness, modesty, deep reading, acute use of language and diplomatic mastery, Warren Christopher has brought us a major contribution—a crucial source on our country's history in the 1990s."

"Gentlemanly, discreet, and utterly focused on substance rather than style—in short, an important book. . . . A first-rate historical document. . . . Anybody who wants to understand American foreign policy from 1993 to 1997 needs to consult In the Stream of History; the speechmaking process was critical to Christopher's management of policy debates in the State Department, and the introductory essays prefacing the text of each speech often provide information crucial for understanding the evolution of American foreign policy in the first Clinton term."

"A first-rate historical document....Anybody who wants to understand American foreign policy from 1993 to 1997 needs to consult In the Stream of History."