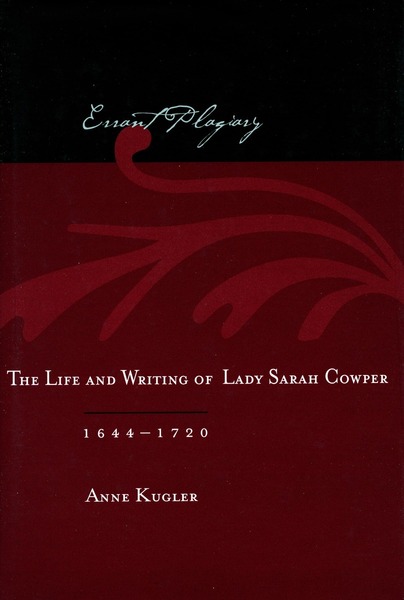 Over the course of sixteen years—from 1700 to 1716—Lady Sarah Cowper kept a truly remarkable diary, comprising over 2,300 pages of intimate commentary, not only on her personal life but also on religion, politics, and society in early modern England. Throughout this revealing text, she interweaves her own words with unattributed quotations from other writings—conduct manuals, sermons, periodicals, and other forms of prescriptive literature—in order to valorize her own identity and her claims to authority, both within her family and within a wider public sphere.

Not only did Lady Sarah borrow the words of others, this “errant plagiarist” reordered and reshaped texts in ways that often subverted their original meaning. Her diary stands as a remarkably explicit record of how an eighteenth-century woman might read and actively interpret the gender and social ideologies of her era in ways that did not always fit the original intentions of the authors of prescriptive literature.

Self-righteous, unhappy in her marriage, socially insecure, and under the stress of the murder trial of her youngest son, Lady Sarah began her diary at the age of fifty-six. Using extensive extracts from the diary, the author recounts Lady Sarah’s conflicts with her husband and sons, her uneasy social rounds, her widowhood, and, most notably, her intellectual and spiritual life.

The story of Lady Sarah, with the vivid descriptions of her emotional and intellectual outpourings in her diary, allows a close examination of the relationship between the large corpus of prescriptive literature of the period (particularly as it related to women and their roles) and actual practice. Through its exploration of the life and work of an articulate, thoughtful woman, the book also casts light on the interworkings of the period’s hierarchies of gender, rank, and age—hierarchies ordinarily viewed in isolation from each other.

"In a year with notable contributions to "women's studies," this book stands out for its haunting portrait of an eloquent woman, with complex desires and concomitant disappointments, living out a life intent on remaining relevant against indifferent social presures."