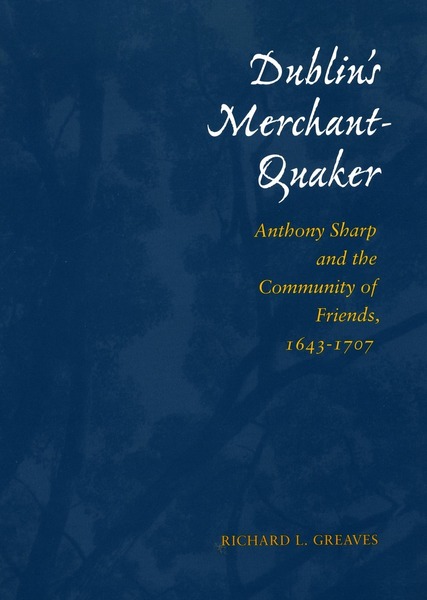 A towering figure in the history of Irish Quakerism, and friend of William Penn and William Edmundson, Anthony Sharp left England in 1669 to settle in Dublin and carve a place for himself in the woolen trade. As a businessman he succeeded brilliantly, employing some 500 workers and amassing a fortune that included lands in Ireland, England, and New Jersey. His economic success helped him gain entree to prominent political and ecclesiastical officials, from whom he sought relief for persecuted Quakers.

Without peer among Irish Friends as an organizer, Sharp played a key role in assisting fellow Quakers to survive repression and to evolve from a small sect into a denomination. With his second wife, Ann, he helped shape the rigorous style of dress and home furnishings that set the Irish Friends apart from their coreligionists in England. Tireless in his work as a secretary, treasurer, and fund-raiser, he served on the committee that monitored the proceedings of the Irish Parliament and helped pioneer the Friends' home and shop visitations. Sharp took up his pen to defend Quakers in "the Lamb's war" against critics on all sides—Catholics, Anglicans, nonconformists, and sectarian extremists.

When James II extended toleration to nonconformists, Sharp seized the opportunity to become a Dublin alderman and sit on committees whose purview ranged from cleaning the city streets to overseeing the workhouse for the indigent. He attained prominence in the weavers' guild, serving as master in 1688-89 and sitting on its council for years. Notwithstanding his distinctive dress, his refusal to take oaths or pay tithes, and his plain speech, he enjoyed the respect of the rich and powerful.

Dublin's Merchant-Quaker is not only a biography of Sharp but a portrait of Dublin's community of Friends. The author explains in detail the functioning of national, provincial, and local meetings; the Friends' work in educating and disciplining their members; their provision of charity to the needy; and their efforts to ransom captives in Muslim lands. In undertaking these activities, Sharp and his fellow Quakers expressed the driving force of their faith and built a society that sustained the Friends for centuries to come as a minority within another minority, the Protestants of Ireland.

Richard L. Greaves is the Robert O. Lawton Distinguished Professor of History at Florida State University. He is the author, most recently, of God's Other Children: Protestant Nonconformists and the Emergence of Denominational Churches in Ireland, 1660-1700 (Stanford, 1997).