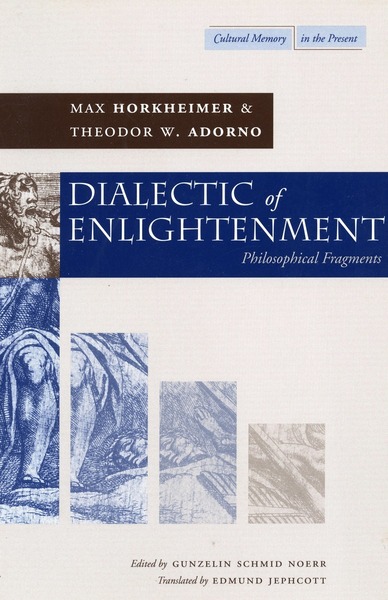 Dialectic of Enlightenment is undoubtedly the most influential publication of the Frankfurt School of Critical Theory. Written during the Second World War and circulated privately, it appeared in a printed edition in Amsterdam in 1947. "What we had set out to do," the authors write in the Preface, "was nothing less than to explain why humanity, instead of entering a truly human state, is sinking into a new kind of barbarism."

Yet the work goes far beyond a mere critique of contemporary events. Historically remote developments, indeed, the birth of Western history and of subjectivity itself out of the struggle against natural forces, as represented in myths, are connected in a wide arch to the most threatening experiences of the present.

The book consists in five chapters, at first glance unconnected, together with a number of shorter notes. The various analyses concern such phenomena as the detachment of science from practical life, formalized morality, the manipulative nature of entertainment culture, and a paranoid behavioral structure, expressed in aggressive anti-Semitism, that marks the limits of enlightenment. The authors perceive a common element in these phenomena, the tendency toward self-destruction of the guiding criteria inherent in enlightenment thought from the beginning. Using historical analyses to elucidate the present, they show, against the background of a prehistory of subjectivity, why the National Socialist terror was not an aberration of modern history but was rooted deeply in the fundamental characteristics of Western civilization.

Adorno and Horkheimer see the self-destruction of Western reason as grounded in a historical and fateful dialectic between the domination of external nature and society. They trace enlightenment, which split these spheres apart, back to its mythical roots. Enlightenment and myth, therefore, are not irreconcilable opposites, but dialectically mediated qualities of both real and intellectual life. "Myth is already enlightenment, and enlightenment reverts to mythology." This paradox is the fundamental thesis of the book.

This new translation, based on the text in the complete edition of the works of Max Horkheimer, contains textual variants, commentary upon them, and an editorial discussion of the position of this work in the development of Critical Theory.