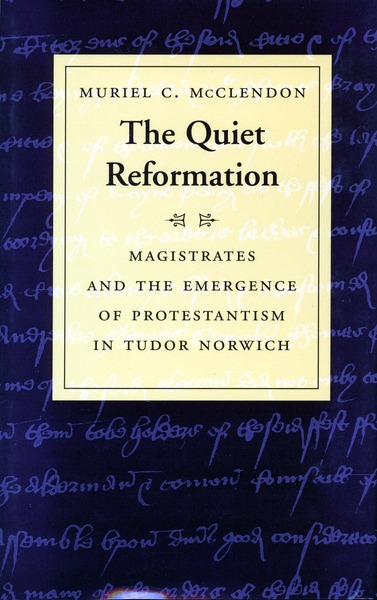 The Quiet Reformation
Magistrates and the Emergence of Protestantism in Tudor Norwich
Muriel C. McClendon

By examining the unusual course of religious change in Tudor Norwich, this book significantly revises the study of both the Reformation and the history of religious toleration in England. It shows that though Norwich experienced a genuine and far-reaching reformation in the sixteenth century, even becoming a hub of Puritan activity in the Elizabethan era, it did so without the breakdown of community, habitual intolerance, and widespread persecution that has been the focus of recent scholarly studies of the period.

Drawing on extensive and largely unexploited municipal archives, the author argues that the course and outcome of the Reformation in Norwich were shaped in important ways by the city's magistrates. She demonstrates that the magistrates, who were religiously divided themselves, practiced a de facto religious toleration throughout the sixteenth century. Although they endorsed each change in Tudor religious policy in a formal sense, they neglected to enforce conformity and to discipline religious dissidents in their jurisdiction. Instead, they acted to defuse local religious disputes without notifying Church or central government officials. They did not extend this de facto toleration out of respect for the beliefs of dissenters or any idea of religious diversity. Rather, they executed a political strategy to deflect outside attention from religious affairs in the city and thus keep civic authority in their own hands.

In showing that conflict and persecution were not inescapable consequences of religious change in the sixteenth century, this book challenges the received assumption of historians about the implacability of religious conflict in Reformation England. It conclusively shows that religious coexistence was possible, and in Norwich, exercised for most of the Tudor period, over a full century before most historians have commonly traced its emergence.

Muriel C. McClendon is Assistant Professor of History at the University of California, Los Angeles.

“The scholarship is first rate, the analysis thoughtful and penetrating, and the writing clear and crisp. McClendon nicely places her story about whether the English reformation gained its major impetus from ‘below’ or ‘above.’. . . It is a book which will be one of the models in its field of early modern urban history.”—J. sears McGee, University of California, Santa Barbara