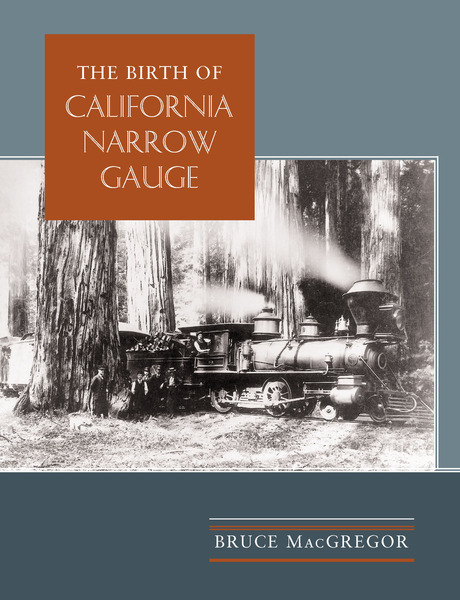 This long-awaited study, the magnum opus of a leading railroad historian, describes the conception, construction, and early operation of the first narrow gauge railroads in northern California. It is lavishly illustrated by some 600 photographs and drawings, almost three-quarters of which have never before been published.

The topic is approached through an unusual lens: the history of the relatively small but extraordinarily inventive contracting and engineering firm of the brothers Thomas and Martin Carter. The Carters were able to reduce the cost and complexity of light railroad construction to the point where local narrow gauge lines could initially compete with the state’s notorious railroad monopolies.

Pioneering a mobile manufacturing operation that could supply locally funded short lines with rolling stock (which traditionally came from East Coast manufacturers), the Carter Brothers began with a line to serve Salinas Valley wheat farmers, desperate to achieve an independent means for conveying their crops to the wharf in Monterey. The narrow gauge railroad that resulted was an act of political and economic defiance, but ultimately a hopeless assault on the "Octopus"—the Central Pacific and Southern Pacific Railroads.

Rallying around the example set in Monterey, a narrow gauge movement in California flourished in the mid-1870s, with the rapid launching of five more companies—the North Pacific Coast, the Santa Cruz Railroad, the Santa Cruz & Felton, the Nevada County Narrow Gauge, and the South Pacific Coast—all of which drew on the Carter Brothers for manufacturing and engineering. Soon, Thomas and Martin Carter were not only selling railroad supplies and engineering to all six short lines, but had won management positions with the strongest, the South Pacific Coast. Until personal and financial disaster overtook them in 1880, the Carters were at the forefront of not just a new business, but a new technology.

Bruce MacGregor holds a senior post in knowledge management at Hewlett Packard. He is the author of South Pacific Coast and the co-author of Portrait of a Silver Lady: The Train They Called the California Zephyr and South Pacific Coast: A Centennial.

"...I love this book. It is well written, extensively researched, and pulled the early history of California narrow gauge railroads together for me."

"Like a superior documentary film or a compelling historical novel, "The Birth of California Narrow Gauge: A Regional Study of the Technology of Thomas and Martin Carter," sheds waterfalls of insight on the history of Northern California during a relatively unexplored era before the urbanization of the Golden State. "

"The Birth of California Narrow Gauge will become an important part of the library of anyone interested in the railroad history of Northern California."

"Filled with hundreds of black and white photographs, copious bibliographical notes, even architectural drawings..., this long-awaited book will be of vital interest to all Californian historians and ought to pique, as well, the interests of many local residents."

"MacGregor's book is an indispensible resource for anyone interested in the background of narrow gauge in California. It will also make a handsome coffee table book—provided you have a coffee table substantial enough to support it."

A grand story, a technological delight, and a gifted historical perspective make The Birth of the Narrow Gauge a delight."

"The story of the scrappy narrow gauge lines made possible by the Carter brothers' new technology will be fascinating reading for any narrow gauge buff."

"This imposing book is a combination of biography, economic and political history, and nuts-and-bolts railroad history, all folded together to provide a fascinating view of early California economic development."

" . . . [I]t is truly a book as beautiful as it is comprehensive, and the author and publisher deserve praise for the impressive result of their collaboration."