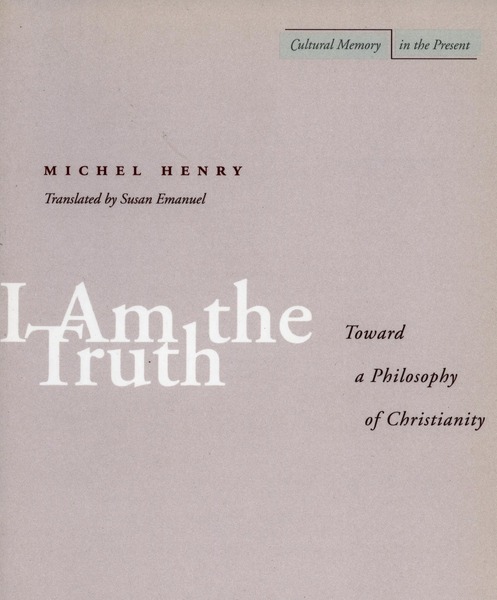 I Am the Truth
Toward a Philosophy of Christianity
Michel Henry
SERIES: Cultural Memory in the Present

A part of the “return to religion” now evident in European philosophy, this book represents the culmination of the career of a leading phenomenological thinker whose earlier works trace a trajectory from Marx through a genealogy of psychoanalysis that interprets Descartes’s “I think, I am” as “I feel myself thinking, I am.”

In this book, Henry does not ask whether Christianity is “true” or “false.” Rather, what is in question here is what Christianity considers as truth, what kind of truth it offers to people, what it endeavors to communicate to them, not as a theoretical and indifferent truth, but as the essential truth that by some mysterious affinity is suitable for them, to the point that it alone is capable of ensuring them salvation. In the process, Henry inevitably argues against the concept of truth that dominates modern thought and determines, in its multiple implications, the world in which we live.

Henry argues that Christ undoes “the truth of the world,” that He is an access to the infinity of self-love, to a radical subjectivity that admits no outside, to the immanence of affective life found beyond the despair fatally attached to all objectifying thought. The Kingdom of God accomplishes itself in the here and now through the love of Christ in what Henry calls “the auto-affection of Life.” In this condition, he argues, all problems of lack, ambivalence, and false projection are resolved.

Michel Henry is Emeritus Professor of Philosophy at the Université Paul Valéry, Montpelier. Among his books translated into English is A Genealogy of Psychoanalysis (Stanford, 1993)

"Henry's philosophy of Christianity at some moments resonates with identifiable Christian claims and at others is radically revisionist if not subversive of Christian thought, all the while joining, if not propelling, the phenomenological turn toward theology."

"Defiant, moving, and vastly challenging, this book contains intellectual drama of the highest order. . . The magnificence and great strangeness of the book, a sweeping blast at the modern history of Western civilization leveled from the perspective of the lost world of a Christian critique of representation, will jolt English-language readers."