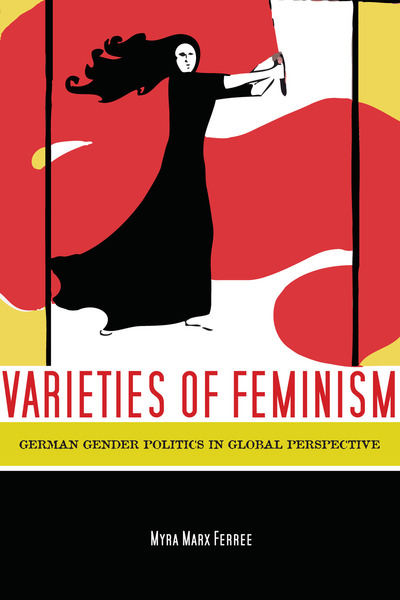 Varieties of Feminism investigates the development of German feminism by contrasting it with women's movements that arise in countries, like the United States, committed to liberalism. With both conservative Christian and social democratic principles framing the feminist discourses and movement goals, which in turn shape public policy gains, Germany provides a tantalizing case study of gender politics done differently.

The German feminist trajectory reflects new political opportunities created first by national reunification and later, by European Union integration, as well as by historically established assumptions about social justice, family values, and state responsibility for the common good. Tracing the opportunities, constraints, and conflicts generated by using class struggle as the framework for gender mobilization—juxtaposing this with the liberal tradition where gender and race are more typically framed as similar—Ferree reveals how German feminists developed strategies and movement priorities quite different from those in the United States.

Myra Marx Ferree is the Alice H. Cook Professor of Sociology at the University of Wisconsin-Madison. Her most recent books include Global Feminism: Transnational Women's Activism, Organizing, and Human Rights (2006) and Shaping Abortion Discourse: Democracy and the Public Sphere in Germany and the United States (2003).

"Myra Marx Ferree's innovative study presents a critical key to understanding the structural and historical differences that have informed debates about and within German feminisms and that continue to do so. Organized into eight thorough and meticulously researched chapters, the book successfully tackles the specificity of German feminism . . . By making comprehensible and concrete the understanding of autonomy and autonomous women's projects Ferree depicts the heart of West German feminism . . . In sum, Ferree's intriguing and incisive examination will remain a unique and extremely valuable account of German feminism and gender politics. The author's analytic depth extends and differentiates previous theoretical work on German gender politics. The very strength of the book—its descriptive and investigative thrust, as well as its breadth—makes it exciting for a specialized audience of scholars, though this monograph is very clearly written and fully accessible even to nonspecialists in German societal movements. Varieties of Feminism: German Gender Politics in Global Perspective is quite possibly the best existing inquiry into the significant differences between German and American feminisms."

"Marx Ferree's sophisticated study shows, in sum, that German feminism was shaped by its own history and that of its nation-state. It has also adapted to new political conditions and incorporated ideas and policies gleaned from intellectual exchange and international institutions."

"[A] rare book that introduces a subject to uninitiated readers even as it lays out new avenues for scholarly research."

"One of the achievements of Myra Marx Ferree's brilliant tour d'horizon of German gender politics is that she dispels all monolithic notions of German feminism. Instead, she carefully dissects the push and pull factors that move German women and their practices since 1848, putting special emphasis on the postwar period since the 1950s . . . [Varieties of Feminism] is a convincingly argued, densely documented, and beautifully written analysis that explores the varieties of feminism within Germany and contrasts them to others, particularly to liberal feminist approaches in the United States."

"In Varieties of Feminism Myra Marx Ferree provides a compelling history of contemporary German feminism, which she contrasts with the history of the American women's movement. . . Ferree's comparative strategy is successful. . . In demonstrating the importance of opportunity structures, Ferree contributes to feminist theory regarding intersectionality as discourse and practice, showing the importance of national political and historical context. . . This is an impressive book that will appeal to practitioners as well as scholars of the women's movement and social movements more generally."

"Breaking new ground in the study of comparative feminisms, this beautifully written and engaging book situates feminist activism in relation to changing gender regimes and gender orders within Germany, the US, the EU, and the UN system itself. Ferree's astute analyses of grassroots mobilizations, cultural production, NGOization, state feminism, gender mainstreaming, and supranational negotiation guarantee that this book will become a feminist classic."

"Too often, American feminism is assumed to be a global norm, but in this excellent comparative work, Ferree reveals that this is not the case. The book explores a variety of women's movements across national settings and provides true insights into the promotion of women's rights in other countries. A tour de force!"

"In light of her unmatched body of work on the comparative development of feminism in Germany and the U.S., I assumed that Ferree had exhausted her insights on the topic. I was wrong. In this extraordinary book, she pulls together, integrates, and provides historical context for her prior work. The result is not only the definitive book on the topic, but one of the very best books ever written on the comparative development of a movement."

"Varieties of Feminism is both a magisterial history of the German women's movement and a provocative rethinking of feminism in its different national and global incarnations. Challenging the theoretical dominance of the U.S. model of feminism, Ferree brilliantly argues that developments in Germany provide a better guide to the future trajectory of women's struggles around the world."

—Leila J. Rupp, University of California, Santa Barbara, author of Worlds of Women: The Making of an International Women's Movement

"In telling the story of the institutionalization of gender politics in Germany over the past half century, Ferree provides rich theoretical insights for understanding the specific ways in which gender intersects with other inequalities in the United States and in numerous other countries as well."

"The history of the German women's movement is compelling in itself, but it is also an important demonstration of the errors of imagining feminism everywhere on the model of a dominant U.S. liberalism. National trajectories are varied, and gender issues woven in different ways into political, cultural, and personal histories. Ferree's story is one in which power relations slow progress, but also one in which incremental changes produce large results. And though focused on the past, it helps us see the openness of the future."

"Varieties of Feminism is a breathtakingly accomplished amalgam of feminist history, theory, and politics. With astute comparisons of German feminisms past and present and feminism in the United States and other European countries, Ferree interweaves theoretical and political analysis of liberal and socialist politics of gender to illuminate how feminist theory turns into practical action. This book is a major contribution to feminist scholarship."

—Judith Lorber, author of Paradoxes of Gender and Breaking the Bowls: Degendering and Feminist Change

"Ferree's work is a brilliant comparative and historical analysis of modern German feminisms. Her empirically rich and theoretically sophisticated account illuminates the diverse dilemmas and opportunities facing proponents of different varieties of feminism, in Germany and across the West, and in productive contrast to the US. The book offers an innovative approach to gender and politics that other scholars are sure to find compelling."

"Myra Ferree's important study of German feminism emphasizes complexity, intersectionality, inconsistencies, and strategic concerns. One overarching message for readers is that feminism is various, set in institutional, transnational, discursive, and local specificities where the state is one of many actors. Because of the many vantage points from which she views the German feminist project, Ferree serves the study of feminism across the globe by offering a model for understanding its differences."

"Varieties of Feminism is a tour-de-force of social science and feminist theory. It is a masterful synthesis of Feree's long-standing engagement with German feminist politics. The book does a brilliant job drawing out the larger lessons of the German case-tracing the evolution of German feminist concerns and the ways they combined commitments to collective representation, self-determination, and personal autonomy. In the process, Feree provides the theoretical tools for analyzing the 'relational realism' of systems of gender as well as a vision of what feminist political struggle might look like in the future."

"Varieties of Feminism is a brilliant analysis of feminist politics, with a special focus on Germany and powerful implications for the United States and other advanced industrial democracies. Myra Marx Ferree is at the forefront of the new political turn in gender scholarship." 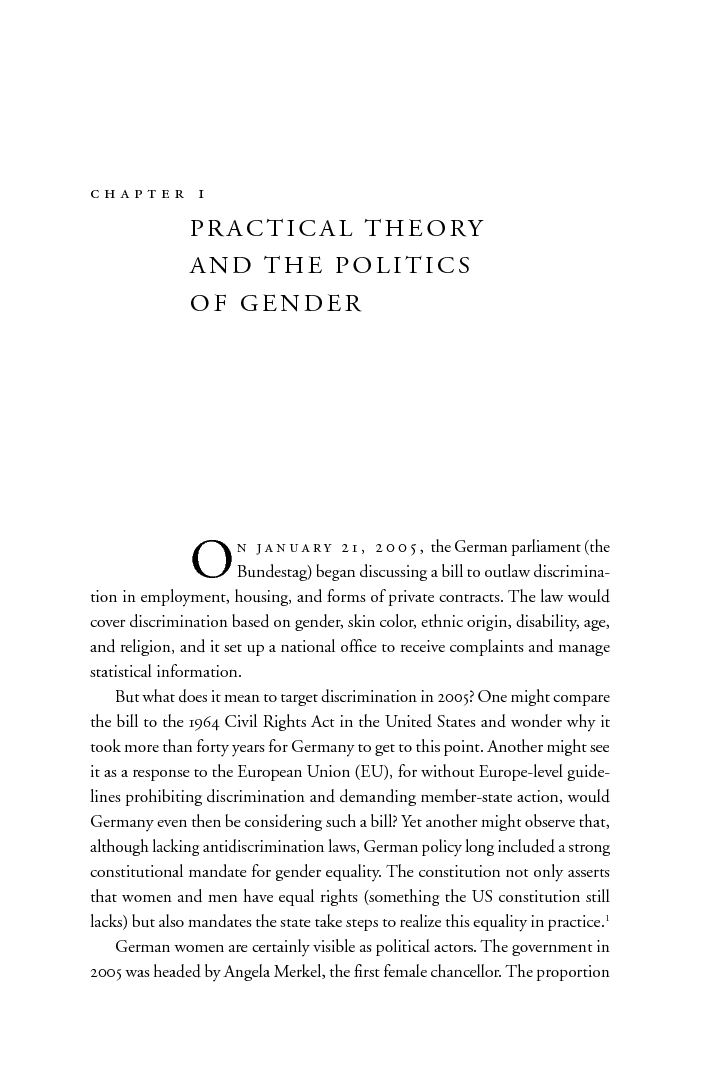 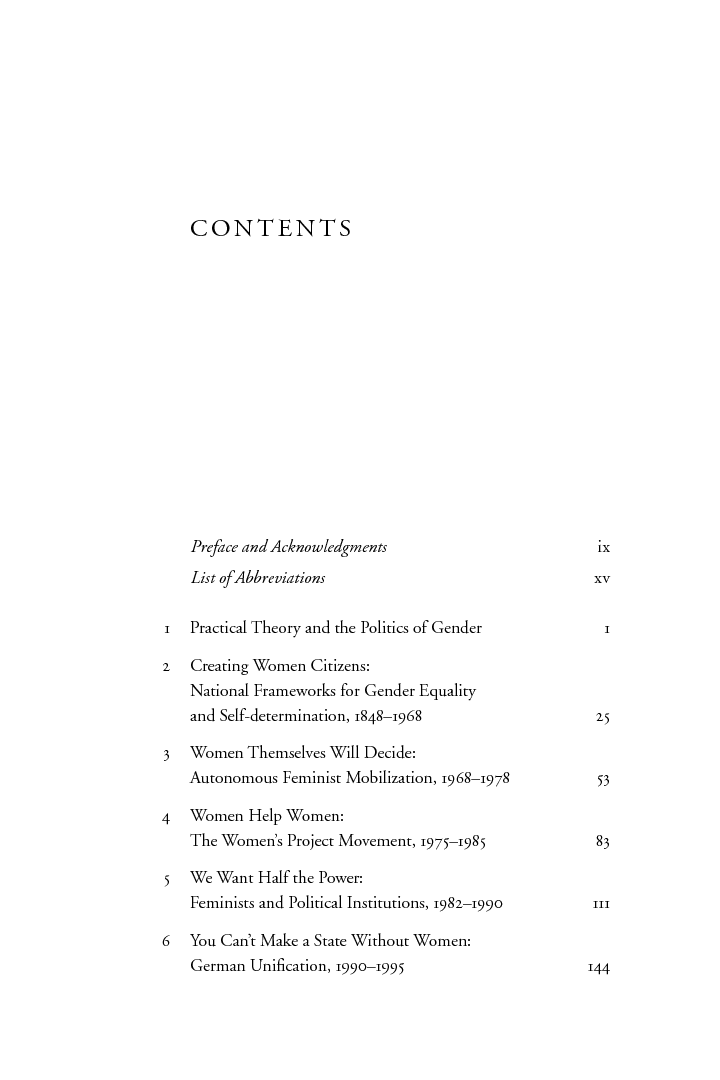