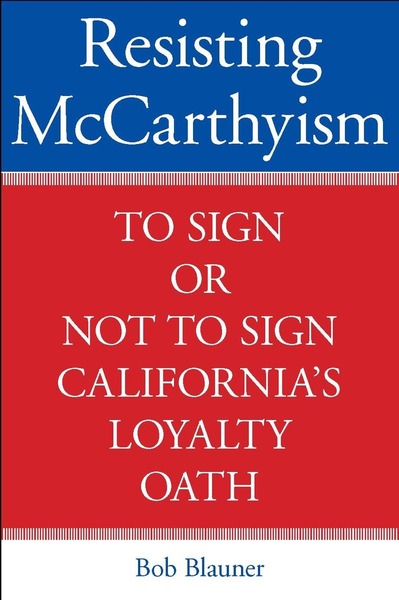 Of the sixty-nine professors fired nationwide for political reasons during the McCarthy Era, nearly half were from the University of California. A small band of men and women at California's Berkeley and Los Angeles campuses defied the stranglehold of McCarthyism in a refusal to sign the non-communist loyalty oath required by the institution. While college professors across the nation meekly acquiesced to non-communist oaths in order to keep their jobs, this group of "nonsigners" resisted in defense of free speech.

Revisiting a controversy considered one of the most important crises ever faced by an American university, Bob Blauner brings to life the stories of those who exhibited such civic courage. His account draws on new, previously untapped primary sources and interviews with surviving participants and their children.

In a narrative that unfolds like a suspense thriller and with tragically flawed as well as heroic characters on both sides of the conflict, this incredible look at the beginnings of resistance within the California system reminds us of the importance of free speech and academic freedom in American culture. The legacy of these resisters and the fears of those engaged in the global fight against communism continue to resonate in contemporary society as we debate the meanings and obligations of freedom, patriotism, and civic duty.

Bob Blauner is Professor Emeritus of Sociology at the University of California, Berkeley. He is the author of Black Lives, White Lives: Three Decades of Race Relations in America (1989), Racial Oppression in America (1972, reissued in 2001), and Our Mothers' Spirits: Great Writers on the Death of Mothers and the Grief of Men (1997).

"In Resisting McCarthyism Bob Blauner ... has created a compelling history of one of the thorniest challenges ever to confront the University of California. His book is neither dry, nor is it parochial, for it builds from strong account of national as well as regional attitudes and fears of the era, while conveying much of the drama, urgency and distress that afflicted the university participants."

"I commend Resisting McCarthyism to anyone who is interested in the psychology of witch-hunts, university governance, and California. Blauner has taken great care to present the oath controversy against the context of the larger events of the Cold War."

"Especially relevant with respect to today's corruptions of the national dialogue on everything from health care reform to dealing with international terrorism, the lessons learned in Resisting McCarthyism'make this an urgently recommended addition to academic and community library collections in general, and the personal reading lists for ordinary men and women concerned about preserving civil liberties in times of national distress."

"Resisting McCarthyism adds considerably, and in a highly engaging way, to our understanding of the Red Scare and the events surrounding the University of California's adoption of a controversial loyalty oath. This is an important political story that effectively relates to past and contemporary debates regarding the proper role and scope of academic freedom, most notably the recent influence of the Patriot Act and similar efforts to restrict civil liberties in light of perceived threats to national security."

—John Aubrey Douglass, University of California, Berkeley, author of The Conditions for Admission: Access, Equity, and the Social Contract of Public Universities

"Resisting McCarthyism brings the California loyalty oath controversy to life in all its complexity and offers the best case study yet of campus political repression and dissent in Cold War America. Blauner makes extensive use of oral history to offer three dimensional portraits of those who created and supported the loyalty oath as well as the faculty and students who resisted. Resisting McCarthyism offers us a dramatic and gripping story of the struggle to preserve academic freedom at a time when it was under assault by California's political and university leadership. His is the first account to place the loyalty oath controversy in a larger political context, exploring how it served as the backdrop to the massive explosion of dissent in Berkeley's Free Speech Movement. Blauner's deeply researched study of the loyalty oath is a must read for anyone interested in the history of academic freedom, the university, political dissent, and McCarthyism."

"Bob Blauner offers a clear look into the McCarthy era's most notorious assault on academic freedom. An eloquent and perceptive rendering of the California Loyalty Oath controversy, this book shows how so many ostensibly liberal administrators and faculty members could have collaborated with a measure that violated the academic community's most cherished freedoms. It's a sobering story and, alas, one that remains all too relevant."

—Ellen Schrecker, Yeshiva University, author of Many Are the Crimes: McCarthyism in America and No Ivory Tower: McCarthyism and the Universities

"Resisting McCarthyism is a much needed reassessment of the history of Berkeley's loyalty oath, based on a diversity of materials and voices. Blauner brings the controversy to life, and he immerses the reader in a fascinating account of its contradictions and internal struggles. Both faculty and administrators share starring roles in this sad drama."