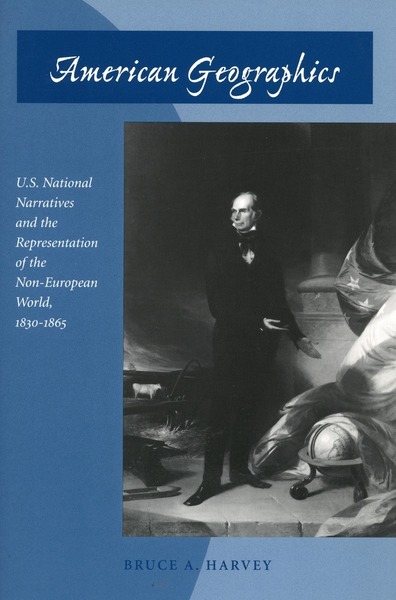 American Geographics
U.S. National Narratives and the Representation of the Non-European World, 1830-1865
Bruce A. Harvey

This book is the first comprehensive study of antebellum depictions of the non-European world. Drawing on well-known works and archival discoveries, both artistic and textual, it proposes that U.S. cultural history cannot be fully understood unless we take into account how Americans regarded tropical America, the Holy Land, Polynesia, and Africa.

The author first analyzes American geographical textbooks, arguing that through their hierarchical, racialized representations of the world's geobodies the American nation became embodied, was able to see itself on a global stage ushering the world into futurity. These textbooks did not just reflect normative, white bourgeois values; they produced those values daily in schools. Balancing psychological and cultural exegesis, the chapters that follow present case studies about U.S. travelers to non-European lands, in which the otherwise lofty geographic gaze became vexed by immersion in actual locales. A variety of issues and ideologies were thereby mediated, contested, or brought into focus: natural legalism (via Polynesia), the Protestant quest for scriptural luminosity (via the Holy Land), the fear of racial hybridity (via tropical America), and the question of African American agency (via Cuba and Africa).

American Geographics, which ranges across the disciplines of archaeology, religion, anthropology, spatial studies, and literary analysis, challenges traditional (and still current) paradigms that trace only the nation's transit westward across the frontier or its inheritance from and allegiance to the Old World. It demonstrates that "America"—the national symbolic order—gained definition, but often uneasily so, through a complex, polygeographical thematics. It thus provides a new comparative framework for thinking about U.S. cultural production and how antebellum citizens viewed themselves, their land, and the vast world beyond it.

Bruce A. Harvey is Associate Professor of English at Florida International University.