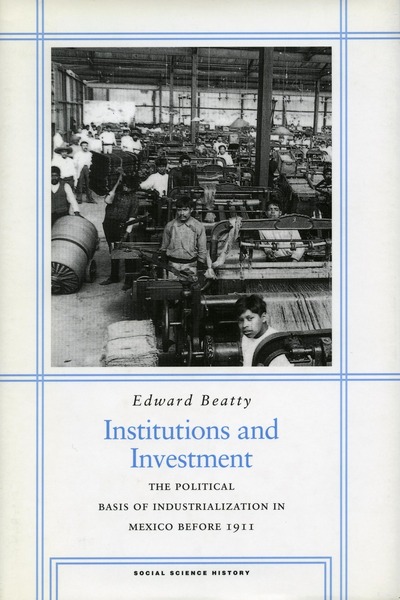 Mexico began its long and often painful transition from an agricultural and rural society to one largely industrial and urban during the late “Porfiriato,” the period between 1890 and 1910. Challenging the standard view of the Porfirian state as dominated by personalist politics, foreign financial interests, and a disadvantageous export economy, this book argues that beginning in the 1890s, the Mexican government adopted a coherent set of economic policies explicitly designed to foster Mexican industry, notably manufacturing.

The author offers the first systematic explanation of why private investment came to Mexican domestic industry in an era when we would expect investors to prefer export-oriented activities, and when imported manufactures held every advantage in the domestic market. He shows that the government of Porfirio Díaz encouraged the development of a domestic industrial sector through a planned and carefully administered set of laws and policies, including commercial policy (import tariffs), intellectual property law (patents), and the New Industries program (that provided tax incentives to entrepreneurs who set up new industries).

This study also offers a case study of rapid institutional change in the context of a relatively backward and transitional economy. Within a historical context, it argues that Mexico’s federal bureaucracy proved able to craft, administer, and adjudicate economic policy in relative freedom from political considerations, resulting in an increasingly diverse economic structure. Within a theoretical context, it argues that institutions play a crucial role in shaping investment behavior, but that understanding this relationship requires careful attention to the structure of policy, to patterns of its administration, to the response of entrepreneurs, and to the broader economic and historical context. This case thus suggests a more nuanced view of the theories of the “New Institutional Economics.”

Edward Beatty is Assistant Professor of History and a Fellow at the Kellogg Institute of International Studies of the University of Notre Dame.

"Beatty has produced a well-researched, carefully analyzed, and conceptually imaginative work. The writing is effective, the use of tables and graphs is appropriate, the organization is clear, and the conclusions are convincing. . . . Beatty . . . has provided a sophisticated contribution to our knowledge of Mexico before the revolution of 1910."

"In an extremely well written and thoroughly researched monograph, Edward Beatty explores a subset of the institutional changes put into place under Diaz. . . . [This] is a book that all serious students of Latin American economic history should read. It offers enormous insight and an all too rare glimpse into the evolution and workings of selected strategic institutions in Porfirian Mexico."

"Beatty's study is an important one with much to tell us about this seminal period of modern Mexico . . . .Proof of the quality of Beatty's study is that is raises as many questions as it answers."

"Beatty's book excels in its systematic analysis of late nineteenth-century Mexican patent and promotional laws; legal, tariff, and tax codes; and in its rigorous view on Mexico's economic bureaucracy."