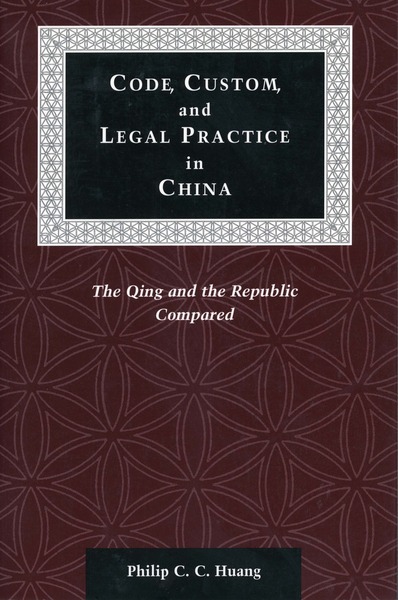 Drawing on archival records of actual cases, this study provides a new understanding of late imperial and Republican Chinese law. It also casts a new light on Chinese law by emphasizing rural areas and by comparing the old and the new.

The book asks the question: What changes occurred and what remained the same in Chinese civil justice from the Qing to the Republic? Civil justice is here interpreted to mean not only codified law but also actual legal practice. Since the consequences of court actions frequently differed from the code’s intent, this book also addresses the question of how legal practice mediated between code and custom. It aims to track the developing history of the legal system and to discover what it meant in the lives of the Chinese people.

Part One covers the revising of the Qing code and the drafting of new codes, especially the Civil Code of 1929-30, the major institutional changes that preceded the promulgation of new laws, and the organizing principles of those laws. Part Two, the main body of the text, uses case records from both the Qing and the Republic to examine certain topics that engendered frequent litigation: conditional sales of land, topsoil ownership, debt, old-age support, and women’s choices in marriage, divorce, and illicit sex.

The book demonstrates the contrasting logics of Qing and Republican law: of privileges granted by the absolutist ruler versus rights independent of the will of the ruler, of a survival ethic versus a capitalist one, of patrifamilial property versus individual property, of reciprocal parent-child support versus unidirectional support, and of partial and limited choice for women versus independent agency. The book shows, however, that in actual practice the new legal systems made many accommodations to traditional customs, thus making major concessions to social realities while still holding to radically different principles.

The author demonstrates the inadequacies of a simple contrast between the Chinese legal tradition and modernity, or between China and the West. He argues instead for paying attention to the local knowledge of modernization and to the logics not only of the codes but also of customs and court actions. He shows, finally, the importance of both systemic structure and individual choice for this social and cultural study of Chinese law.

Philip C. C. Huang is Professor of History and founding Director of the Center for Chinese Studies at the University of California, Los Angeles. His most recent book is Civil Justice in China: Representation and Practice in the Qing (Stanford, 1996).

"Huang's convincing work, at the vanguard of important changes in our vision of Chinese law, deserves wide readership and should be of interest to many types of readers."

—Canadian Journal of Law and Society

"[Code, Custom, and Legal Practice in China] will be of substantial interest to historians and legal scholars of modern China."