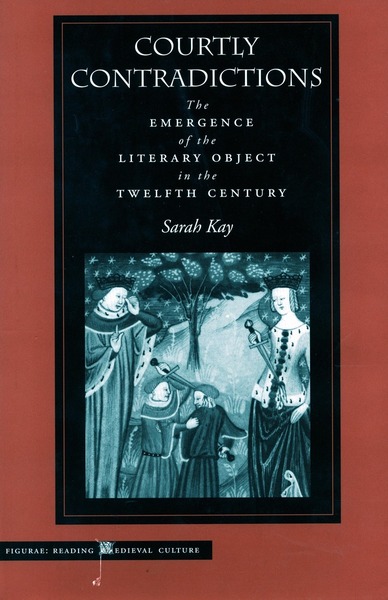 Where does courtly literature come from? What is the meaning of "courtly love"? What is the relation between religious and secular culture in the Middle Ages, and why does it matter? This book addresses these questions, as its title indicates, by way of contradiction. Contradiction is central both to medieval logic and to most modern protocols of reading; it therefore informs both the production and the reception of medieval texts. Yet contradiction itself is rarely analyzed, serving more often as a spur to interpretation than as its object.

This book works between the complex philosophical culture of the twelfth century (principally the traditions of Aristotle and of philosophical Neoplatonism, which diverge significantly in their treatment of contradiction) and the no less complex thought of Lacan (which is just as bound up with contradictoriness). Situating twelfth-century Anglo-Norman, French, and Occitan literature within this philosophical embrace, the author studies the interaction of three major literary genres—hagiography, troubadour lyric, and romance—an interaction that, in the course of the century, generates what we now call "courtly literature."

She shows how preferences for different ways of dealing with contradiction migrate from one genre to another during the twelfth century. She also shows how this movement resulted, by about 1170, in different traditions converging to produce the complex artifacts that canonized literary "courtliness," not only for the Middle Ages but for us as well. Coinciding with this convergence, there is a shift in the locus of contradiction from subject to object. This crucial development not only privileges the object within texts, it also cements the value of texts themselves as object.

In a series of comparisons between religious and courtly texts that draws on the writings of Lacan and Kristeva, the author explores how these objects can be variously described in terms of the psychoanalytical concepts of abjection, sublimation, or perversion. The book concludes by suggesting that the historical importance of courtly literature lies in its capacity to mediate, through the centrality accorded to the contradictory object, this transfer from medieval to modern structures of thought and thereby to shape modern forms of enjoyment.

Sarah Kay is Reader in French and Occitan Literature at the University of Cambridge. Her most recent book (as co-editor) is The Troubadours: An Introduction.

"There is a great deal here to engage both the historian and the literary specialist."

"This innovative and provocative book examines the interaction of religious, clerical and courtly culture in the second half of the twelfth century, concentrating primarily on texts in Old French but also discussing Old Provencal and Latin texts."