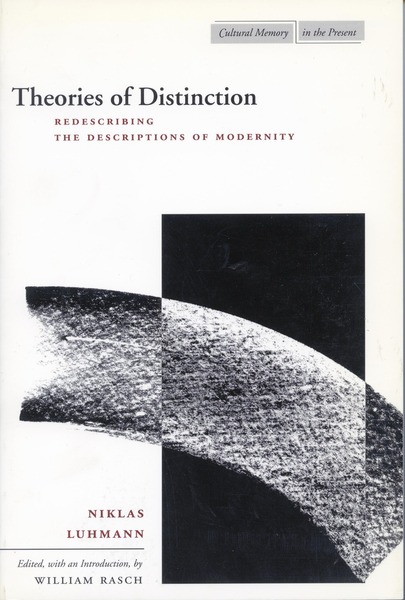 The essays in this volume by Germany's leading social theorist of the late twentieth century formulate what he considered to be the preconditions for an adequate theory of modern society.

The first two essays deal with the modern European philosophical and scientific tradition, notably the ogy of Edmund Husserl. The next four essays concern the crucial notion of observation as defined by Luhmann. They examine the history of paradox as a logical problem and as a historically conditioned feature of rhetoric; deconstruct the thinking of Jacques Derrida, especially his language-centered allegiances; discuss the usefulness of Spencer Brown's Laws of Form; and assess the consequences of observation and paradox for epistemology.

The following essays present Luhmann's theory of communication and his articulation of the difference between thought and communication, a difference that makes clear one of Luhmann's most radical and controversial theses, that the individual not only does not form the basic element of society but is excluded from it altogether, situated instead in the environment of the social system. The book concludes with a polemic against the critical thought of the Frankfurt School of postwar German social thought.

Niklas Luhmann was Professor Emeritus of Sociology at the University of Bielefeld. Stanford has published five other of his books, most recently The Reality of the Mass Media (2000)

“Luhmann’s thought has become more and more influential internationally as one of the very rare examples of the ability of social theory to enlarge its theoretical resources and thereby gain a new grasp of significant empirical phenomena. This book presents Luhmann as a thinker who advances existing difference theories by combining them with systems theory.”—Dirk Baecker, University of Witten/Herdecke