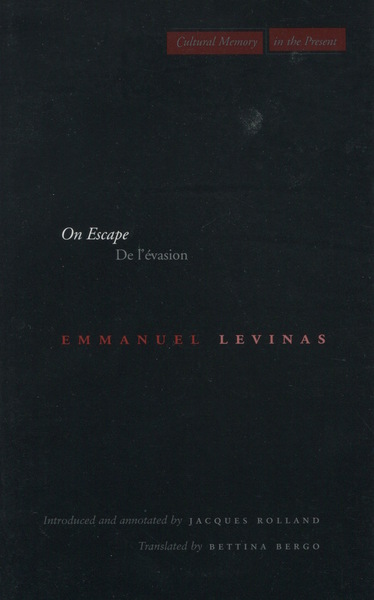 First published in 1935, On Escape represents Emmanuel Levinas's first attempt to break with the ontological obsession of the Western tradition. In it, Levinas not only affirms the necessity of an escape from being, but also gives a meaning and a direction to it. Beginning with an analysis of need not as lack or some external limit to a self-sufficient being, but as a positive relation to our being, Levinas moves through a series of brilliant phenomenological analyses of such phenomena as pleasure, shame, and nausea in order to show a fundamental insufficiency in the human condition.

In his critical introduction and annotation, Jacques Rolland places On Escape in its historical and intellectual context, and also within the context of Levinas's entire oeuvre, explaining Levinas's complicated relation to Heidegger, and underscoring the way Levinas's analysis of "being riveted," of the need for escape, is a meditation on the body.

Emmanuel Levinas was Professor of Philosophy at the Sorbonne and Director of the Ecole Normale Israelite Oriental. Stanford has published four other of his books: God, Death, and Time (2000), Of God Who Comes to Mind (1998), Proper Names (1997), and Outside the Subject (1994).