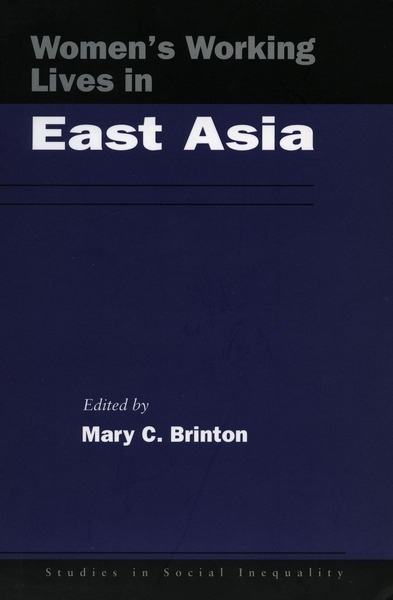 One of the most dramatic economic changes of the past century has been the increase in married women’s work outside the home. This volume examines the nature of married women’s participation in the economies of three East Asian countries—Japan, Taiwan, and South Korea. In addition to asking what is similar or different about women’s economic participation in this region of the world compared to Western societies, the book also asks how women’s work patterns vary across the three countries.

The essays focus on key theoretical questions for the study of women’s labor and, more broadly, economic gender inequality. How do we assess the “value” of work available to married women in different countries and cultural contexts? What forces promote or hinder women’s work outside the home throughout marriage and childrearing? Does wage employment necessarily benefit women more than the “informal” sector (e.g., family-run businesses)? Is full-time work always more desirable than part-time work? Do women who return to the labor force after absences due to family responsibilities incur a heavy wage penalty for interrupted careers? The essays balance comparative assessments in a broad East Asian context with detailed investigations of one or more questions in the context of a specific country.

The studies reveal that, although all three countries share common cultural and demographic conditions, patterns of women’s economic participation are distinctly different in Taiwan from those in Japan and South Korea. Whereas women’s participation in Taiwan’s economy shows striking similarities to many Western countries, married women in Japan and Korea participate less in the economy, and their earnings differ more from men’s than in Taiwan or the West. Why is Taiwan more similar to the West while Japan and South Korea are more similar to each other? The book draws on a broad range of materials to explain this puzzle.

One of the explanations advanced is that overall labor demand, a greater supply of highly educated men, and more rigid work conditions (especially in large firms) in Japan and South Korea are major obstacles to the equal economic participation of married women in those countries. Also, the greater flexibility in work demands and work hours prevalent in Taiwan is complemented by relatively weaker patriarchal values in the family.

Mary C. Brinton is Professor of Sociology at Cornell University. She is the author of Women and the Economic Miracle: Gender and Work in Postwar Japan and the co-editor of The New Institutionalism in Sociology (Stanford paperback, 2001)

"[Women's Working Lives in East Asia] provides much needed description and analyses around. . . . [themes] which have not previously been discusses in English-language scholarship."

"The book is unusual for edited volumes in that the individual chapters come together in a unified, consistent argument. This book is a 'must read' and highly recommended for scholars of women's studies, economic development, and East Asian studies. It belongs in every research library. . . . "

"This valuable book is a must read for academics and students at all levels. Its readable, clear, and comprehensive presentation and rich original data should make it accessible to all levels."

"I recommend Women's Working Lives in East Asia to anyone who wants to understand women's working lives outside the industrialized West."

" . . . This book is a welcome addition to our knowledge of women's participation in three important economies of East Asia."