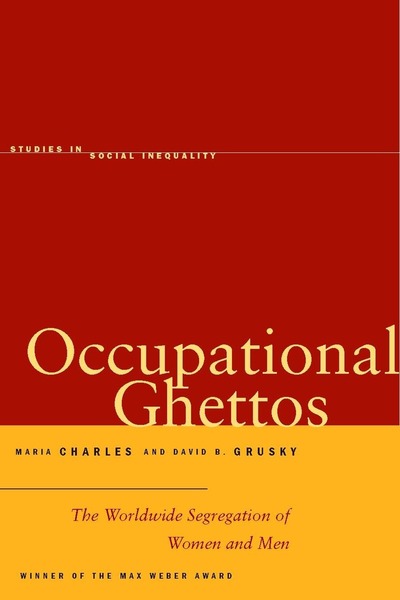 Occupational Ghettos
The Worldwide Segregation of Women and Men
Maria Charles and David B. Grusky
SERIES: Studies in Social Inequality

Winner of the 2005 Max Weber Award for Distinguished Scholarship, sponsored by the ASA Organizations, Occupations, and Work Section.

The last half-century has witnessed dramatic declines in gender inequality, evidenced by the rise of egalitarian views on gender roles and the narrowing of long-standing gender gaps in university attendance and labor force participation. This development, while spectacular, has been coupled with similarly impressive forms of resistance to equalization, most notably the continuing tendency for women to crowd into female “occupational ghettos.” This book answers the important questions: Why has such extreme segregation persisted even as other types of gender inequality have lessened? Why is segregation especially extreme in precisely those countries that appear most committed to egalitarian reform and family-friendly policies?

"The authors lay the groundwork for revisiting the basics of our field, and lead readers on an intellectual journal through occupational ghettos... Its highly innovative as well as academically rigorous analysis make Occupational Ghettos a must-read for all scholars interested in workplace gender relations."

"The book is essential reading for people interested in gender inequality in labor markets, and its importance has been recognized with the Max Weber Award from the Organizations, Occupations and Work section of the ASA."

"Twenty-first century women work in offices, shops, and even factories at rates almost as high as men's. Yet most women are still under men when it comes to pay, authority, and autonomy. Charles and Grusky document the tenacity of gender inequality and the crucial role that occupational segregation plays in perpetuating it".—Michael Hout, Professor of Sociology, University of California, Berkeley

"With great technical proficiency, Charles and Grusky lay bare the patterns of occupational segregation shared by all affluent economies: women are over-represented in nonmanual (and men in manual) jobs but in both sectors men still hold better jobs. Everyone who theorizes about gender and class should study these authors' insights."

"Occupational Ghettos: The World Wide Segregation of Women and Men addresses a fundamental paradox for gender and work: Women are increasingly present in high-status occupations, but the decline in sex segregation has stalled. In a provocative thesis Maria Charles and David Grusky identify two dimensions of segregation: a hierarchical dimension that egalitarian ideals have weakened and a horizontal dimension that an essentialist view of the sexes has preserved. In developing and painstakingly testing a new theoretical model, Occupational Ghettos is reminiscent of Blau and Duncan's pathbreaking book on the American occupational structure. No one interested in gender in contemporary societies can dare to ignore it."

"One of the truly great challenges to contemporary sociology is understanding the revolutionary impact that women have on postindustrial change. Occupational Ghettos responds to this challenge with fanfare, giving us the most thorough, rigorous, and balanced sociological study of gender segregation yet undertaken."

"This book is a major contribution. It is required reading for anyone wishing to understand gender differences in the world today." 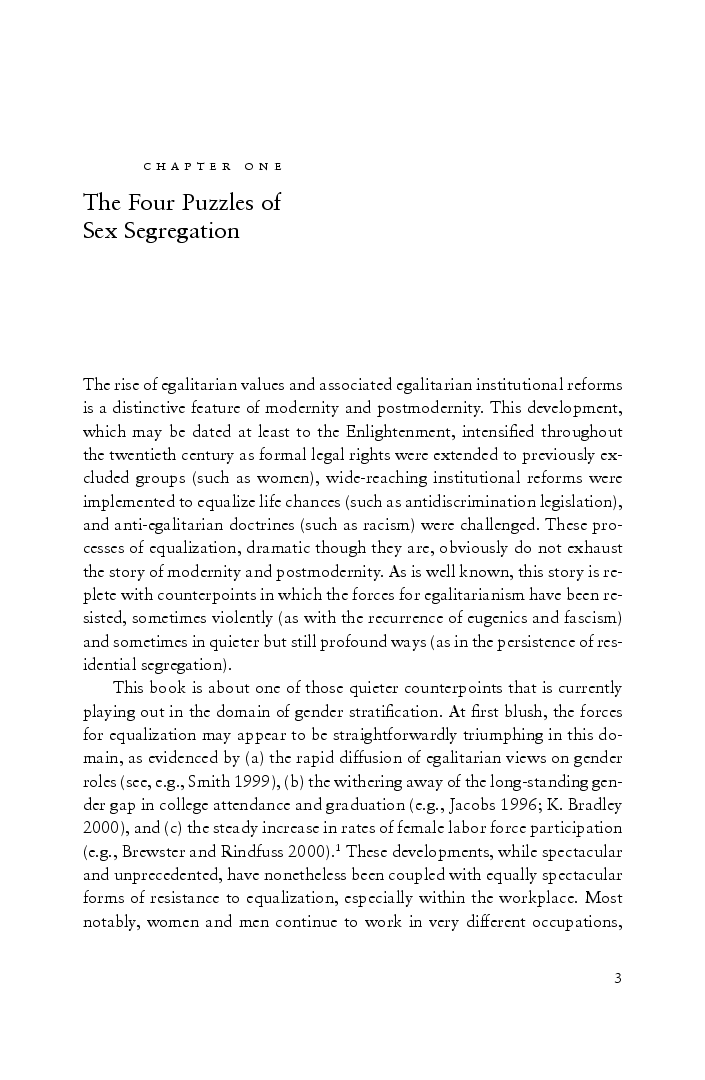 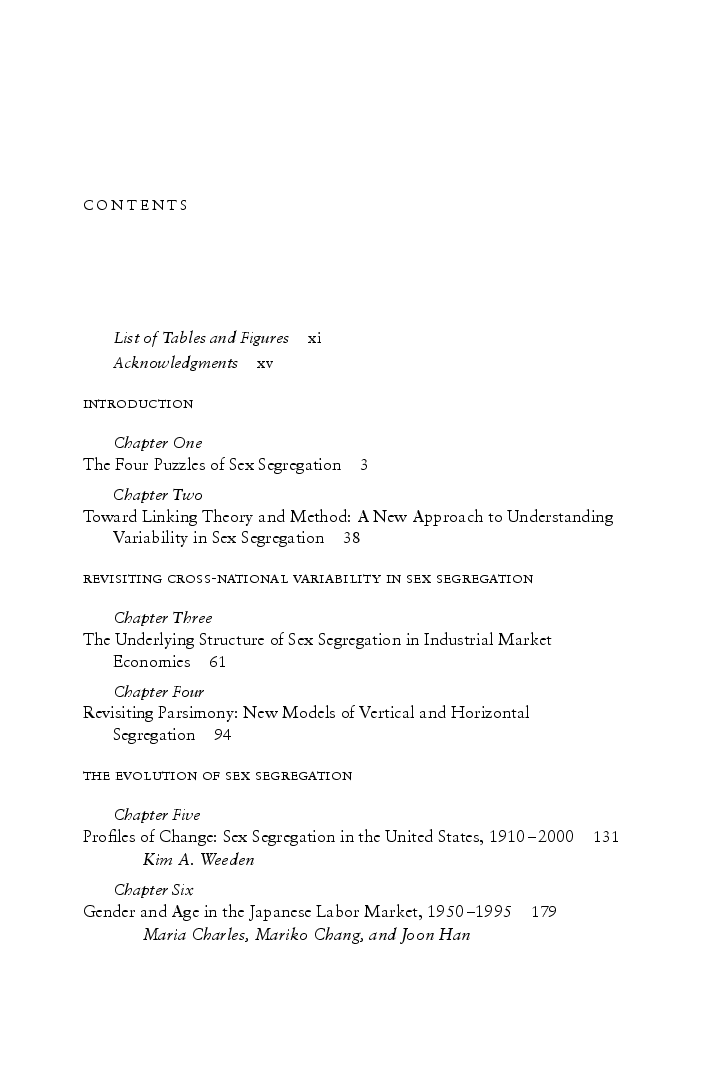 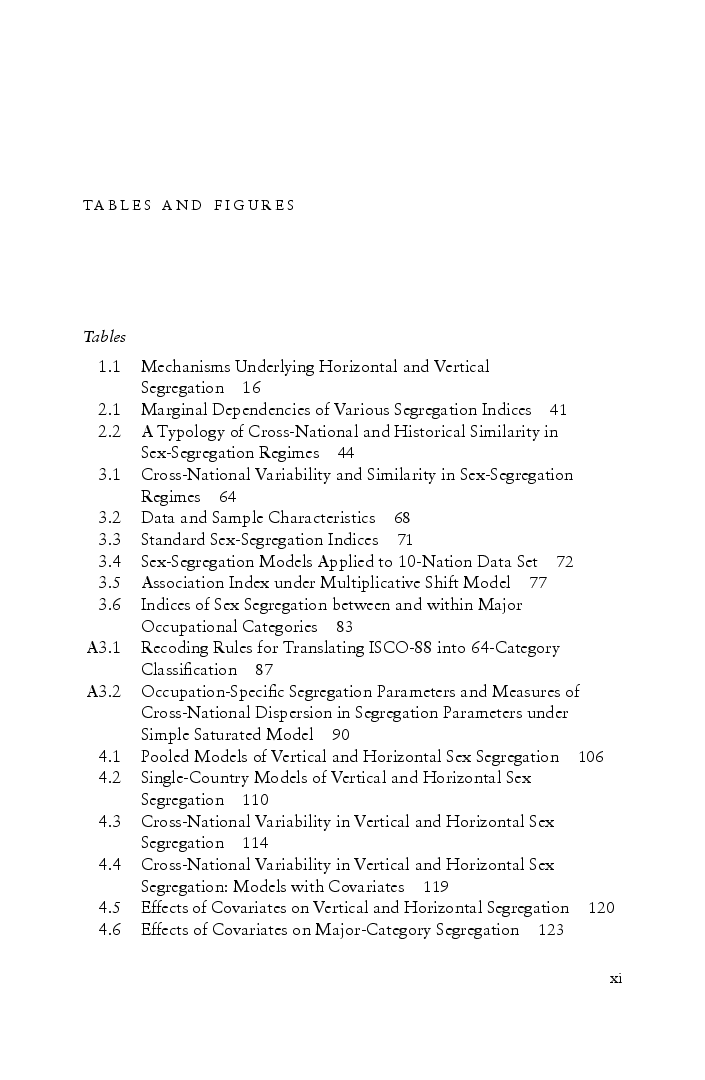